Leisure, expression, socialising: how to understand the next billion internet users 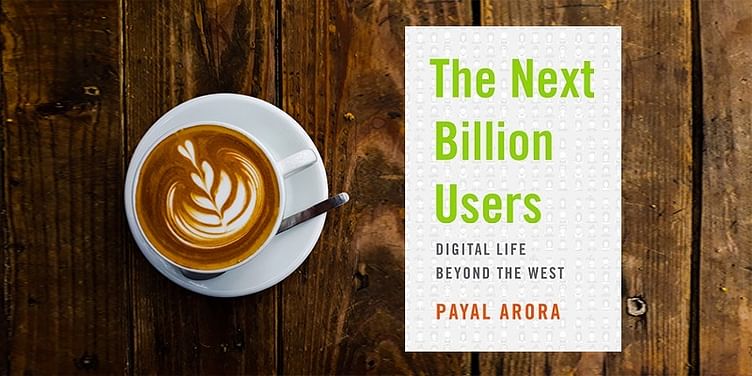 This insightful new book shares a range of findings on how emerging markets are experiencing the internet, social media, and smartphones. From leisure and education to social interaction and privacy perceptions, the research is valuable for a wide spectrum of stakeholders.

Digital anthropologist Payal Arora researches the online lives of poor people in emerging economies such as South Africa, China, India, Brazil, and the Middle East in her new book, The Next Billion Users: Digital Life beyond the West. She unearths misconceptions held by corporates, governments, and NGOs in terms of user perceptions and habits.

Payal’s findings show that the global poor use online media not just to study, find jobs, and obtain health information, but also seek pleasure, visibility, leisure, and entertainment. In the process, they negotiate issues of privacy, interaction and social tradition. The author calls for more research in issues of culture, technology, regulation, commerce, and surveillance, so as to go beyond Western perspectives of the poor as largely utility-driven beings.

Payal Arora is the author of Leisure Commons: A Spatial History of Web 2.0 and Dot Com Mantra: Social Computing in the Central Himalayas. She grew up in Bengaluru and graduated from Harvard and Columbia. Payal is Associate Professor in the School of History, Culture, and Communication at Erasmus University, Rotterdam. She has consulted for Kellogg, the World Bank, Shell, HP, GE, Siemens, UNESCO, and the Government of Jordan.

The material is spread across 270 pages, including 30 pages of references. Here are my key takeaways from the eight chapters; see also my reviews of the related books Cellphone Nation, Geek Nation, Tomorrow’s World, The Mind of the Futurist, The Hybrid Domain, A World of Three Zeros, Do Good, and The Four.

The poor go online not just for work and productivity but play and entertainment, Payal begins. She draws on examples of public internet kiosks becoming gaming stations, mobile vans becoming movie vans, and cyber cafes becoming ‘friendship cafes’. The poor in emerging economies spend precious money on smartphones, airtime, and professional photos; some may also indulge in pornography and piracy.

Leisure is a key driver of the popularisation of digital media in emerging economies. It is important to understand social contexts, needs, and aspirations behind online leisure, Payal argues. This involves examining rural-urban, age and income gaps.

The online medium opens up opportunities for leisure that may not have been easily accessible in the offline world, particularly for marginalised and excluded communities. In that regard, Maslow’s theory that the poor can focus on leisure needs only after meeting basic needs has been debunked. “The internet is the poor person’s leisure economy,” Payal describes.

The emotive drive is as important as the drive for economic or efficiency benefits. Leisure on the smartphone is also a way of killing time during endless waits in queues. Leisure applications have become the friend of tech firms seeking to expand their market base in emerging economies.

“Everyone hungers to socialise and be entertained,” Payal explains. “Leisure is, however, deeply gendered,” she cautions. She also unearths complexities in perception of “gold miners” who sell in-game currency to players based primarily in the West.

Smartphones and social media give youth new opportunities for self-expression and exploration beyond the confines of traditional social norms. Cybercafes have become recreational hubs and dating cafes, not just sources of information for education and employment; they enable cheap browsing as well as convenient socialisation opportunities.

Music concerts and theatres were banned for many years in Saudi Arabia, thus leading to social media becoming online hangouts. “In a deeply suppressed culture like India’s, sexuality has few outlets,” Payal explains; this has led to India having one of the world’s highest rates of Internet pornography consumption.

Youth have a voracious appetite to penetrate these new worlds, and the “visual economy” is particularly important for semi-literate youth. At the same time, Payal cautions that there is a risk of envy and frustrated aspirations in the online world.

Movie theatre tickets, CDs, and DVDs are expensive for most poor people, thus becoming a driver for the media piracy industry. Illicit consumption of corporate media has become the norm outside the West, Payal explains. Post-colonial societies have a complex task ahead of them in terms of redefining earlier divide-and-rule practices and IP laws; more investment is also needed in local media industries.

Payal calls for giving the global poor the “dignity of a formal system that enables them to legally access sources of entertainment.” This can be done by overhauling business models of large media firms. “Survival economies are not conventional economies,” she says.

The author also explains how “download entrepreneurs” are helping transfer music from computers to memory cards, and operate in a “grey market” alongside mobile phone stores for sales and repairs. Sharing of media is sometimes seen as part of a “gift culture.”

Payal calls for deep reflection on whether such players should be classified as “activists, entrepreneurs or criminals.” Interestingly, “Pirate Parties” have been formed in more than 40 countries, ranging from Sweden to Brazil.

The poor are being lauded for skills in frugal innovation, thus leading to calls for involving them in co-creation and inclusive capitalism. “There is a thin line, though, between collaboration and exploitative commodification,” Payal cautions.

“Poverty hacks” like M-Pesa in Kenya are much lauded, she observes, also pointing to the Jaipur Foot (prosthetics) and Tata Nano car as frugal projects. “Involving the community to co-hack their future has become trendy among governments worldwide,” Payal notes.

Ushahidi is another example of “humanitarian hacking.” The annual IDHack (International Development Hackathon) is also an example of hackathons for social entrepreneurship. The government of Brazil has hosted a number of hackathons and competitions in this regard.

“Hacking has also become a powerful tool for rebranding nations,” Payal observes, pointing to China’s hackerspaces as part of its ‘Innovate with China’ agenda or ‘Chinovation’. Hackers are being presented as creative professionals.

Payal cautions that hackerspaces which began as countercultural spaces should not be co-opted by governments who usurp them. Hackers should continue to focus on problems of marginalised communities.

Much has been written about jugaad innovation in India, but Payal cautions that this should not be seen as an excuse for shoddy and unsafe solutions. It is important to solve the larger systemic problems that led to such tweaks in the first place, eg. better public transportation instead of jerry-rigged two-wheelers.

Payal observes that many emerging economies have a thriving “repair culture” for faulty goods instead of the “disposable” culture in the West. “Over the years, Apple has made the iPhone increasingly less open to repair by the user,” she rightly observes.

“The game of constant upgrading is a serious deterrent to users being able to develop DIY repair skills,” she cautions. German high-quality high-priced products are also not geared toward frugal innovation, Payal adds.

Peruvian economist Hernando De Soto argues that the informal economy is actually the norm across the world, particularly in emerging markets. Public-private partnerships are trying to engage more deeply with the informal economy to create “harmonious capitalism.” However, Payal cautions that these “do good” approaches can sometimes be cosmetic and come across as public relations rhetoric.

One chapter sounds a cautionary note about the excessive hype around play-driven autonomous learning and tech-centric teaching at the cost of investing in good schools and teachers. “Good learning and teaching cannot be automated,” Payal warns.

The author denounces Nicholas Negroponte’s One Laptop Per Child initiative (which many studies showed did not improve learning achievements). The Hole in the Wall project and Self-organised Learning Environment (SOLE) toolkit, advocated by Sugata Mitra of NIIT, also have been found to be flawed. Studies show that children do need a certain amount of guidance, order, and routine.

“Myth has been allowed to trump fact in the name of doing good,” Payal cautions. Unfortunately, the mood seems to be in favour of “sexy” projects and quick remedies paraded by false messiahs, rather than pragmatic long-term solutions.

“The poor have long been used as test subjects for social experiments,” Payal laments, but they should not be “guinea pigs for new technology.” Today, tech companies continue to push their products as solutions for poverty, subsidised by the government.

Even in the US, high-tech models like AltSchool have been pushed, though a number of them are shutting down. “Poverty is Silicon Valley’s laboratory,” Payal wryly observes, as techies are convinced that they are the new messiahs.

High-profile competitions with million-dollar prizes push app-based solutions for learning that seem to dispense with schools and teachers. Such apps may help students learn the basics, but it is teachers and schools that help with creative and critical thinking and take learning even wider and deeper, Payal urges. There should be apps for teacher effectiveness, not just child autonomy.

“Public funding’s end goal is to produce the largest social impact for the most marginalised populations, even if it is not profitable,” Payal explains. Unfortunately, these considerations are disregarded in the search for market efficiency and “responsible innovation” that is financially sustainable.

“In a digitally mediated life, nothing is private,” Payal explains. “Data is the new economy,” she adds. But the “digitised disenfranchised” are also harnessing collective intelligence to avoid harassment.

The author traces a wide range of poor communities’ perceptions and behaviours related to online privacy; they have very little physical privacy in crowded homes and slums. In general, they seem to be balancing their desire to play openly with strangers online along with a need to protect themselves from unwanted attention; they are active seekers as well as “savvy hiders.”

“Surveillance has a colonial heritage,” Payal explains, pointing to British fingerprinting of Indians during the colonial era. Surveillance practices and new technologies have continued after independence as well, though new laws are being enacted in some emerging economies to protect privacy. The welfare state is also a surveillance state, she cautions.

China has revealed a social credit system to score each citizen’s trustworthiness. India has the Aadhaar project as well as a new privacy law. Many Latin American countries have passed laws on personal data protection and consumer rights.

Young Indians view social media as open and positive spaces. Youth value honesty and authenticity in the online world along with happiness. In Brazil, however, there is concern about location tracking on mobile due to high incidences of kidnapping. Personalised ads are seen as beneficial and convenient by some users in India, while they are seen as creepy and even cruel by some users in Brazil.

Dealing with online risks has led to a number of coping strategies by the poor and marginalised. These include the use of anonymity, multiple accounts, and sharing of password protection tips among friends.

In general, both approaches have validity: the right to visibility and the right to be forgotten. “Selective visibility is desirable,” Payal urges. The author also calls for more digital privacy literacy, data protection laws, and increased public awareness about the business models of digital giants like Facebook and Google.

It is in the realm of romance and sex via the online world that fundamental views on privacy can be unearthed, Payal explains. For example, couples in relationships may share passwords.

The book ends with further concern expressed about persistent exoticised Western views about the poor from the rest of the world. The author also notes the rise of fake news and hate speech around the world, and the rising momentum for “data justice.”

Payal calls for more research in understanding the intersection of trust, belief, capitalism and the fringe in the digital era. Young people in deeply conservative societies can often explore and express themselves largely through their digital lives.

“After decades of being excluded from the marketplace, the global poor are gaining fast entry into the world of digital consumption,” Payal sums up. More studies are needed to understand the happiness level of the global poor during digital play, and on larger emotional and economic impacts.