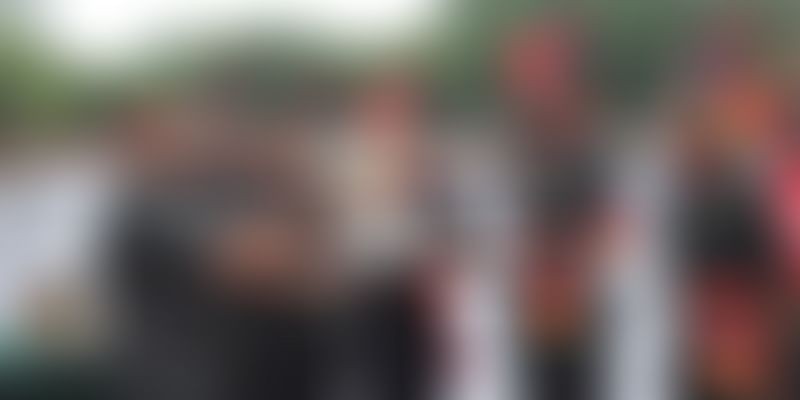 Technology has made life easier – you can order a cab to your doorstep, get food and groceries home delivered, and buy your medicines online. But what happens if you need help in your neighbourhood? Be it medical emergencies, accidents, harassment, lost and found cases, or any other situation, Mumbai-based Linkus Infratech promises help – that too from ex-servicemen – through its app, Bhonga.

Founded by Radhika Agarwal in March this year, Bhonga (it translates into 'loudspeaker' in Marathi) is an app that aims to be a loudspeaker that “takes your voice to the people around you”. Run and owned by Linkus Infratech, Bhonga employs retired soldiers from the Army, Air Force, and Navy to guide citizens through emergencies of any kind.

Radhika, the Founder and Director of Linkus Infratech, says her aim was to offer on-the-fly connectivity “where citizens can get help in case of emergency and can share resources and information”. Think of it as a digital neighbourhood watch programme that involves former servicemen!

Bhonga connects people present within an area of one km seamlessly after they download the app and register. It is important to keep your GPS on (the app only shares location coordinates for security reasons) to be able to send a message in case of any need. The app also supports voice notes and photos.

The app is four months old, but the journey is three-years-long. After completing her MMS Finance in 2006, Radhika started her career working in the stock markets. It was three years ago, when her son started schooling, that Radhika realised that managing school communication became was a major problem.

A problem solver by nature and always keen to turn entrepreneur, she decided to work on this problem and floated her own company, Linkus Infratech Private Limited, in 2016. At that time, the app connected parents, schools, and students, irrespective of location. “I named it Linkus as I wanted to link child, parent, and school for a meaningful purpose,” Radhika says.

After running the app for two years, Radhika wanted to do something that was industry-agnostic. She felt that ex-servicemen in localities could be of better help and could problems, especially during emergencies.

“We wanted to connect people in one locality to help each other during important and critical times. This led to the birth of the Bhonga app this year,” Radhika says.

“I feel Bhonga takes a person’s connectivity beyond friends and family. It connects the unconnected in the locality. One of the users said it's like a ‘local Twitter’ where people in an area connect with each other for their own reasons.”

The app has two tabs, Emergency and Connect, and can be used to seek “the neighbourhood’s help in case of any situation”. When an emergency is reported, the location of the post is also shared and people nearby are notified.

“There is no need to have other users’ phone numbers or names in your phone. There is no need to join any group. This is a completely public platform. The circle of the app moves dynamically. Hence, a person always has real-time connectivity with his or her surroundings,” she says.

Radhika felt that retired defence personnel would be the best choice for this venture as they would get employment even as citizens benefited from their expertise. She adds that loyalty, discipline, commitment to work, and the willingness to take responsibility are qualities that make defence personnel the perfect fit to manage emergencies.

“They are capable of working in hostile environments. Thus, we decided to have ex-servicemen monitor all the emergencies generated on the app,” she says. Bhonga is presently operational only in Mumbai.

Radhika has hired a two-member team of ex-military men, which is led by Captain Mahendra Gopal Ghag, who has served the Indian Army under Maratha Light Infantry for 32 years. “The team is equipped to travel across Mumbai if need be. As the app spreads its wings beyond the city,  Linkus Infratech plans to hire more such personnel for the team,” Radhika says.

Capt Ghag highlights that every year 60,000 soldiers retire with little option but to take up sundry security jobs. “The biggest problem defence personnel face after retiring from military service is adapting to the unorganised and inconsistent civilian world. Life in the armed forces is very organised and disciplined, but there are no rulebooks in the civilian world,” he says.

“I feel Bhonga can leverage the experience of retired armed forces personnel and offer valuable help to the locality while offering a great opportunity to an army man to live a meaningful life,” he adds.

Radhika speaks about how Capt Ghag was recently able to help in a missing person emergency after a family from Malad posted about their problem on the platform.

The company has associated with two former defence senior officers as of now and plans to add more. Refusing to divulge any monetary details, Radhika says that the retired officers are paid per emergency/incident.

Radhika says the app can also be downloaded by local authorities like police, ambulance, and NGOs, so that they can “deliver their services more effectively in their respective localities”.

Apart from connecting people with ex-servicemen in case of emergencies, the app is also used by people living or visiting in the neighbourhood for resources like ridesharing , books, clothes etc.

“Small businesses can use this as their new marketing tool. I feel micro-economies in every locality can flourish through Bhonga,” Radhika says.

Bhonga plans to monetise with its freemium model. Radhika says the connectivity till one km will always remain free for an individual or business, but the company will charge for wider connectivity in the future.

“It’s too early to set targets. First, we need to focus on creating thicker circles where people are sharing information, and sources and cohesive localities are created.”

Radhika says it is too early to divulge sales and revenue details  as she is trying to build the company. However, she says that the idea has been very well received by the people in Mumbai. “Since its official launch in March, there have been more than 10,000 downloads. Three emergencies were reported and resolved in the last three months,” she adds.

The company wants to take baby steps and go area-wise in Mumbai before it expands. “We are focussing on Vile Parle and trying to make the circle thicker. The focus will be to concentrate on one suburb at a time for the next two years,” Radhika says.

Radhikha has bootstrapped her company (she did not disclose the amount) and is now bto support her expansion plan, which includes on-boarding more ex-servicemen, strengthening technology, and creating better brand awareness.

Going ahead, the company plans to partner with the Army Welfare Placement Organisation (AWPO), which comes under the Ministry of Defence, to enable and empower army veterans and encourage them to come and help civilians around them. “We plan to have 37 ex-servicemen monitoring every constituency of Mumbai on our rolls by the end of FY21,” Radhika says.

From the battlefield to a farm field: 91-year-old army veteran becomes social entrepreneur