After testing the waters in fintech, MomoE founders set their sights on Rs 8,000 Cr footwear market with Flatheads 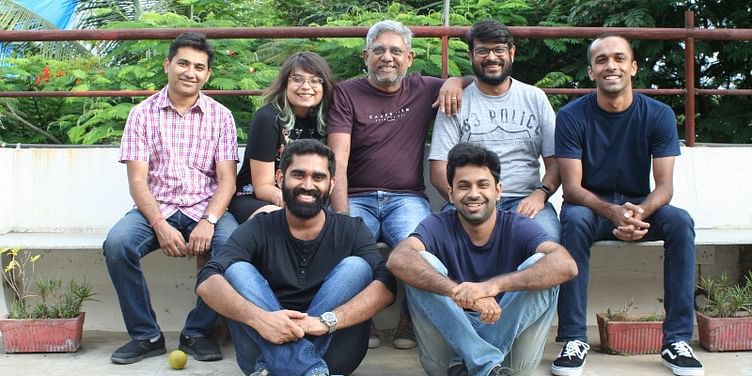 Started by MomoE founders Utkarsh Biradar and Ganesh Balakrishnan, Bengaluru-based Flatheads is a men’s casual footwear brand. The online-only brand will be available to customers starting this Diwali

“I possibly have more shoes than my wife and two daughters,” says Utkarsh Biradar, Co-founder of Flatheads. A self-proclaimed lover of shoes, and previously the founder of fintech startup MomoE, Utkarsh realised one thing - in the startup world, we are mostly on our feet!

"You start work early in the morning; working hours are long and then you have meetings. If you look at the shoes available in the market, there’s nothing that is work and fun appropriate. People look for something different, something that matches their personality, and we saw this gap in the market,” Utkarsh says.

This led him and Ganesh Balakrishnan, co-founder at MomoE, to start Flatheads, a brand of men’s footwear that focuses on semi-casual and casual styles. The startup began operations end of last year, and the brand’s products will be available online from Diwali this year.

Ganesh and Utkarsh had earlier started MomoE, a fintech startup, which was acquired by Gurugram-based ecommerce platform Shopclues in 2016. The duo were at Shopclues for a couple of years for the transition. Utkarsh worked as the CPO while Ganesh managed the merchant ecosystem at Shopclues.

However, they were looking to make a difference in the consumer experience space. “If you look at it, MomoE too was in the customer experience space. Many times we would see long queues in the supermarket, and drop the cart or simply wait for a long time. We wanted to change that with MomoE,” Utkarsh says.

With Flatheads, the duo decided to solve a modern, consumer-centric problem. Ganesh explains there have been lifestyle changes, and currently athleisure shoes are often worn as lifestyle shoes. Apart from that, there are fashion brands that have shoes as a part of their ensemble, iconic brands, and sporty brands like VANS or Converse.

“Currently, there is a gap in the market in the price ranging from Rs 2,000 to Rs 4,000. Mass market shoes are available below Rs 2,000 and premium brands above Rs 4,000. In the Indian context, we are starved of a brand that has a personality, is aspirational, and won’t cost you an arm and leg,” Ganesh says.

With Flatheads, the duo believe they are offering people better options and a brand that helps them wear their personality.

The team is initially starting with men’s sneakers, as “close to 70 percent of the sneakers market is men”. They plan to start with 25 stock keeping units (SKUs), five styles, and five colours. Utkarsh adds that they want to start with lesser moving parts, but will have the entire range of products in 18 months.

“We want to choose a tribe of people who can be early adopters. Eventually we believe that everyone has a personality and aspiration comes from that personality. One of our observations is that people belong to a tribe - music, food, performing arts, pop culture, or entrepreneur tribe,” he says.

“Most brands don’t look at it from an expression standpoint - but that is how a person consciously or unconsciously thinks about it, and that is what Flatheads wants to focus on,” Utkarsh adds.

The duo is keen to focus on design and bring in “personalities to that design”. Currently, the manufacturing is outsourced to vendors in China, but they hope to bring that to India soon. However, the polyester mix that the team is building now is hard to manufacture in India in small volumes.

Flatheads will be an online-only brand for the next two and half years. This is primarily to help with inventory.  “We want to create low volumes and keep moving with the trends. The shoes won’t be available more than six months,” Ganesh says.

Four startups that are helping Indian consumers make a lifestyle statement with their unique an...

Learnings from MomoE and Shopclues

Being their second entrepreneurial stint, the duo say they bring in different learnings from the fintech and the ecommerce world. But one thing has been constant, they say: focus on customer experience.

“One of the big mistakes we did at MomoE was begin with the discounting game everyone was following. Cliched as it sounds, throwing money doesn’t guarantee loyalty. There was a time we were offering free beer to those who signed up and that was a big mistake. There has to be a prime value and we have corrected that,” Utkarsh says.

The founding duo has also learnt the importance of partnerships. At MomoE, they focused on building everything from scratch, but they could have gone to market quicker if they had found partners. “We are working with multiple partners for Flatheads,” Ganesh says.

At Shopclues, they also learnt about growing in scale, volumes, and working with data to create virality with lower customer acquisition costs.

Men’s footwear as a category is believed to be worth Rs 8,000 crore, and growing at 20 percent. Former Co-founder of Satya Paul, Jyoti Mohan Narula, has also started a footwear brand for men, Joe Shu. Apart from that, men’s-only brands like Socksbakery, XXYY, and Marico-acquired Beardo are fast growing.

The Flatheads team has raised angel funding of $500,000 from prominent angels like Pankaj Chaddah, Co-founder, Zomato; and Sahil Barua, Co-founder, Delhivery. The team intends to launch more SKUs once they launch.

“The beauty of ecommerce - all the working pieces are in place, everything is in plug-and-play,” Utkarsh says.