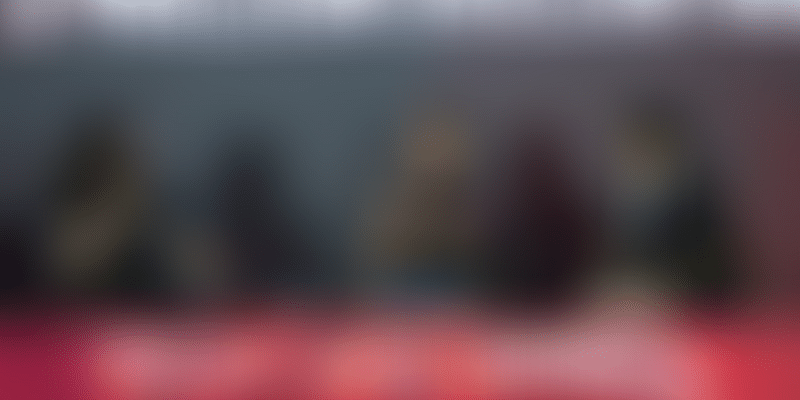 By zeroing in on a huge, hitherto untouched, market at the right time, the young B2B ecommerce startup has quickly wooed investors and users alike. At YourStory’s TechSparks 2019, the audience got a peek at how Udaan, which famously has no CEO, did it.

On October 3, 2019, YourStory reported that Bengaluru-based B2B ecommerce platform Udaan raised $585 million at a valuation between $2.5 billion and $3 billion.

Those not familiar with Udaan’s unique B2B strategy were left wondering how a three-year-old company raised this much capital. But Udaan’s worth stems from the huge value it endeavours to create for small businesses by helping them make more money.

In a conversation with Shradha Sharma, Founder and CEO, YourStory, at Techsparks 2019, Udaan co-founders Sujeet Kumar and Amod Malviya explained exactly how they are making the lives of small business entrepreneurs better.

“We started in 2016 with the thought that the power of the internet was not easily available to Indian small and medium enterprises (SMEs). The timing of the opportunity was also right, with internet penetration increasing across the country,” Amod said.

The idea was to enable B2B transactions by bringing together all participants, including the wholesaler, distributor, producer, and the small retail shop owner, onto a single platform, such as a smartphone app.

Sujeet believes Udaan’s success is a consequence of these benefits offered to SME customers. He explained,

“There are 50 million to 60 million small business entities, and we are providing a way for them to earn more and get more returns on their capital. Our growth and scale are a by-product of that. We are not changing their life. We are just helping them make more money through selection, prices, discovery, credit, logistics, payments, etc.”

With operations across lifestyle, home and kitchen, pantry staples, fruits and vegetables, FMCG, toys, etc, Udaan helps small manufacturers, brands, mills, and farmers in Tier II and III towns and villages sell their products across the country at a low cost.

Udaan’s focus is firmly on the demand coming from such places.

According to Sujeet, Udaan sees 85 percent of demand coming from beyond the top 30 Indian cities. “When Amod and I were in Flipkart, we saw that majority of sales happened in 20 to 30 cities. At Udaan, the demand comes from beyond these cities. We are now in 900 locations and delivering in these rural and village areas through our logistics solutions,” he said.

This demand comes from merchants and retailers, who, Amod believes, form some of the hardest working communities, spending 12 to 14 hours a day at work.

“Any amount of ease introduced in their lives makes a huge difference to them. By enabling them to purchase goods online from the convenience of their shops, they no more have the need to travel to the nearest city to buy goods,” he said.

Leveraging tech in a not-so-sexy space

Udaan tapped into this small business ecommerce segment when no other players were spending big to leverage technology and make the lives of small entrepreneurs easier. Even today, the organised retail segment accounts for just about 10-12 percent of the sector and is expected to reach 22-25 percent by 2021.

Consolidating the unorganised retail segment is certainly a massive opportunity, but working with small businesses and kirana stores is often considered non-sexy.

Amod admitted it is a non-sexy space to be in, but emphasised that working with small businesses is a great way for tech entrepreneurs to step outside their comfort zones.

“Our engineers stepped out and met local retailers and merchants and understood their needs. Founders need to understand who they are solving for, and what difference they are making in their lives. This holds good not just in the initial days of a company but also in the later stages,” he added.

According to Amod, at Udaan, even the non-tech people think in a tech-oriented way. “Both tech and non-tech efforts have to come together to solve for Bharat.”

Sujeet agreed. “Internet has penetrated even the lower rungs of society. But there are a lot of product gaps. All these gaps are opportunities. People know what they want and if you are building a product to address that need, you are creating a product for Bharat,” he noted.

Sujeet built operations, supply chain, and logistics at Flipkart while Amod was the CTO at the ecommerce giant. When they started Udaan, they realised that working in a B2B space would be radically different from their B2C experience at Flipkart.

In B2C ecommerce, buyers are incentivised to make a purchase, but in B2B, a partnership needs to be forged between the ecommerce player and its small business customers.

“It takes time to build partnerships because the livelihoods of the small businesses depend on their relationship with the ecommerce player. It is important to show them that the ecommerce player understands their business. The retailers had many questions for us, such as, how will I manage if Udaan is not there tomorrow?” he added.

Further, the number of purchases made per buyer varies. Amod explained, “The average B2C consumer made three to four purchases a year at Flipkart. But at Udaan, merchants and retailers made nine to 10 purchases a month. Unlike a B2C consumer, whose online buying is largely a discretionary spend, buying goods is part of life for small businesses. Thus, we needed to introduce rigour to the platform to meet this demand.”

Why Udaan doesn’t have a CEO

The Udaan co-founders also went over why the company doesn’t have a CEO, stating that they wanted employees to prioritise working for Udaan rather than working for a CEO.

In an earlier interaction with YourStory, Amod had said, “There are a lot of companies who are far more mindful of the power of decentralisation. We look at most things on a first-person basis and a need basis. We actually don’t have titles across the organisation. There is a power that we have sensed that comes from focusing only on the merit of the discussion and not the title of the person who is talking.”

At Techsparks 2019, Amod recollected a meeting with an investor who refused to fund Udaan because he wouldn’t invest in a company with no CEO.

“We realised not having a CEO could be a policy matter for some investors. But we stuck with our idea of not having a CEO because we had seen more negative aspects than positives of having one,” Amod said.