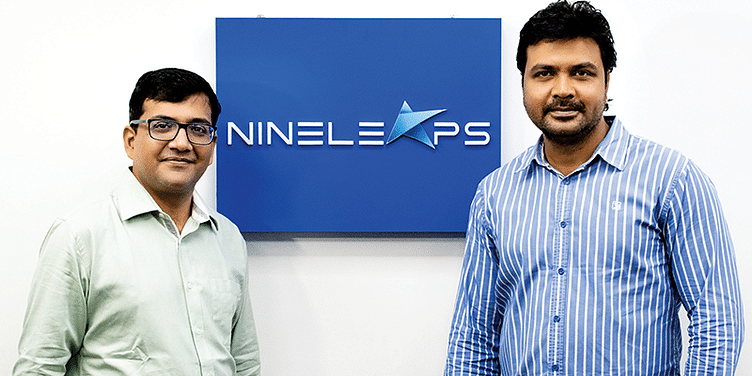 Founded by Divy Shrivastava and Vivekanand Jha in 2014, Bengaluru-based tech product startup Nineleaps aims to enable digital transformation for businesses with its focus on problem solving and unique approach to precision engineering.

Divy Shrivastava and Vivekanand Jha shared a love for coding, software products, and technology platforms. Their drive to know and do more led the techie duo, both IIT-Madras graduates, to establish Nineleaps, a software product tech startup, five years ago.

Divy and Vivekanand founded Nineleaps in 2014, with a focus on creating software products. Today, the startup has customers from diverse segments, including a global retailer, national health insurance infrastructure, cab aggregator, stock trader, and even a chess tournament!

Nineleaps has been working with Bay Area startups and Fortune 500 companies, providing highly scalable and performance-driven applications in web, mobile, big data, and analytics. The bootstrapped venture has remained profitable throughout, except for the first year.

The seeds of the startup were sown way back in 2008 when the duo reunited through a friend after each had brief stints in the corporate world. They had graduated from IIT-Madras in 2005.

“We decided to build something in 2009, but had no clue what to do. We would just code (then) and be happy,” Vivekanand says.

One day, a common friend asked for help in creating a technology product, and they successfully created one.

This started the Nineleap journey, where initially they got projects through referrals. Despite the lack of domain knowledge in a few cases, such as a stock exchange and a global chess tournament, their expertise was sought after.

“We had no clue about these subjects but decided to take a shot (at it). We were good at solving problems,” Vivekanand says.

Essentially coders who were problem solvers, their start was rocky as a founding member was poached by a client, and three-fourth of their revenue also went along. That was when Divy and Vivekanand decide to dig in and fight.

The years from 2009 to 2013 were a learning experience that cemented the foundation for creation of Nineleaps.

“This was the period when we learnt to build products, and realised that this was the most wanted skill for many startups,” says Divy.

As a bootstrapped venture, Nineleaps began with the idea of being hands-on while creating products, and doing more with less.

“There was an assumption at that time that firms in India were getting work because of (charging) lower costs but we never believed in that. It became a major pivot for us as our billing rates went up with a change in employee profile,” Vivekanand says.

The business model of Nineleaps depends on the type of project. In some cases, it is a one-time payment; in others, they charge a royalty for each product built.

Having worked for five years on different projects, Nineleaps has stuck to its fundamental principles.

According to Divy, three fundamental blocks help Nineleaps create effective software products - algorithm stacks, data engineering, and services. The expertise in these three areas has helped them create innovative products that are scalable.

As a software product creator, the startup remains sector-agnostic yet has an emphasis on segments like retail, mobility, and education. However, it does not have a long list of clients.

“Most of our customers come to us through referrals. At any given point, we have four to eight clients who we work very closely with, and build deep relationships,” Divy says.

Today, around 60 percent of Nineleaps’ clients are international; the rest are from India. The founders believe they have been honest about their expertise, made no false promises, and have a hunger to learn.

“In many cases, we admitted to not knowing a technology to our clients, and that we were willing to learn as we were good at what we do,” Vivekanand recalls. This included programming languages like Java and Python.

The tech startup, which has a 450-strong team, as made it to LinkedIn’s list of 25 hottest Indian startup to work for in 2019, the second year in a row . The founders are also proud that many of their employees have been placed in established companies and leading startups. In a way it is also testament to their human capital resources.

Attracting and retaining key talent is a key factor in growth, which is why the founders created their own software product that identifies key talent in engineering colleges beyond IITs.

“We always wondered if there was a way of knowing the best four individuals in every engineering college,” Vivekanand says.

This tech platform conducts aptitude tests, video analytics, etc. It has already completed 21,000 assessments for the core team. “There is a lot of demand for our services, and we look for people who have a product mindset. We need talent aligned to that philosophy,” Divy adds.

The founders believe that there is a great opportunity to further sharpen their skills in terms of quality and engineering design.

“We have competed against the big guys in the industry and won. Our challenge lies in the discovery of new things,” Vivekanand says.

Divy adds, “We understand the market dynamics. We know if we do good work, more will come our way.”

The founders are clear about not seeking external funding right now. "We are generating enough demand while being cash rich. Even for a presence in a foreign location like Europe or North America, Nineleaps can fund it through internal accruals," they say.

Their plans are big, but the logic is simple. “We have always enjoyed what we do and will continue to work that way,” Divy says.