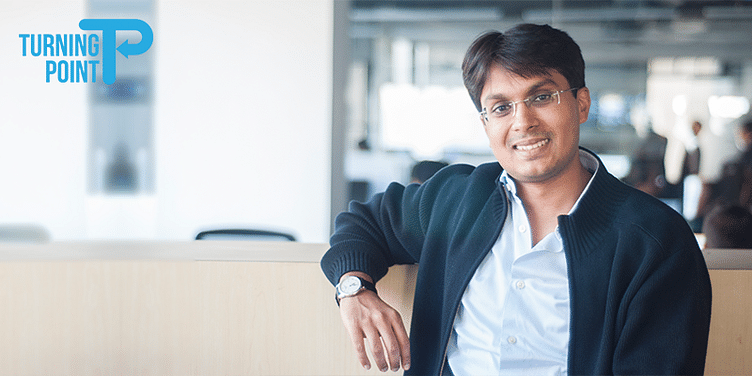 Turning Point is a series of short articles that focusses on the moment when an entrepreneur hit upon their winning idea. Today, we look at Mumbai-based O2O marketplace Fynd.

O2O marketplace Fynd’s journey started in 2012 as Addsale, which was later renamed to Shopsense, and finally ﻿GoFynd﻿. The Google-backed startup was recently in the news for being acquired by the Reliance Group.

Fynd’s journey started when Farooq Adam and Harsh Shah quit their jobs at Opera Solutions and were moving back to Mumbai from Delhi. The duo was looking to start their own venture, and was exploring startup ideas in the electronics space, building a network ERP system for construction companies, and in-store interactive recommendation system.

While doing their primary research, Farooq and Harsh realised they wanted to start-up in a space which would not just be about building a new technology, but would also provide large opportunities.

During his time as a Business Analyst in the US, Farooq had worked in the retail sector and knew what it took to run a store. One of the initial products he had built during his time at Opera was called Addsale.

“Addsale was essentially a point of sale recommendation system that would display to customers the additional products they could buy at the time of check-out,” Farooq says.

He then met his college senior over lunch to discuss Addsale’s idea. On showing the first prototype, his senior suggested him to visit nearby stores and try selling the prototype.

Farooq and Harsh went to Juhu Tara Road, a fashion boutique lane in Mumbai, and stepped into the Diesel store. “A management trainee guided us to the Head of CRM. After pitching the product idea, he (Head of CRM) called us to Reliance’s head office to pitch the idea to Deval Shah, Business Head, Reliance,” Farooq says.

Farooq and Harsh did not have a team in place then. Before pitching the idea to Reliance, they decided to give Addsale a more ‘formal’ name, and the duo settled with Shopsense. While there was no time to build the prototype, Farooq took a few large printouts of how the final product would eventually look like and presented it to Deval.

Once convinced, Deval asked Farooq to work on Diesel’s guidelines and run a pilot test. From September 2012 till November 2012, they worked on building the product. In the first week of December, Shopsense went live in Mumbai’s Palladium Mall. It soon raised money from Kaye Capital.

By May 2013, Shopsense hired its first team. The company worked on a SaaS model, and charged Rs 10,000 per customer, per month.

In 2014, Shopsense started working with Nike, and offered products on its platform that wasn’t available in the Nike store.

“This moved Shopsense from being an experience product to a transaction product. But on figuring out how to make this into a large company, we realised that a few constraints still existed that did not allow the business to scale,” he adds.

With 20-odd customers, Shopsense was rebranded to Fynd in 2016. Soon, Fynd rolled out its Android and iOS apps. It only allowed people to buy products from nearby stores in a hyperlocal manner. Today, Fynd customers from any city in the country can order branded products from stores across India.

Currently, Fynd has more than 500 brands on its platform, including Hamley’s, Steve Madden, Diesel, Michael Kors, Super Dry, Nike, Puma, Adidas, etc. It powers more than 8,500 brand stores across the country with a real-time inventory.

The startup is backed by marquee investors including Google, Venture Catalysts, Axis Capital Partners, IIFL, and Artha India Ventures. Recently, in August 2019, Reliance Industries inked a pact to acquire a significant stake in Fynd for up to Rs 295.25 crore.