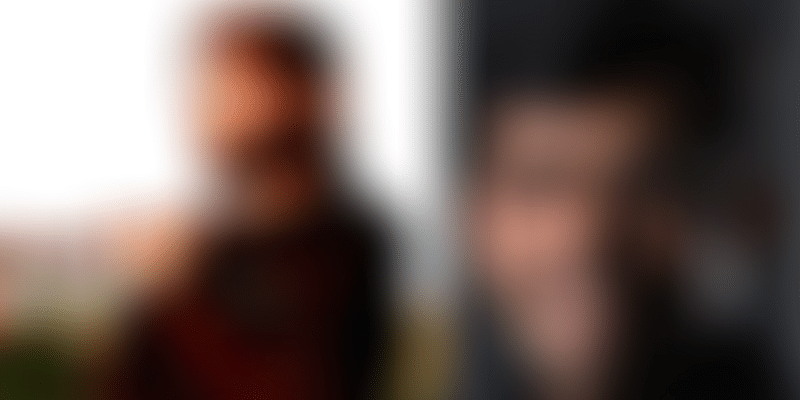 The novel coronavirus has infected over 7 lakh people worldwide, and has claimed  nearly 38,000 lives, according to the World Health Organisation (WHO).

While humanity is racing against time to find a cure for the disease, Delhi-based PerSapien Innovation has come up with a machine called Airlens Minus Corona (-Corona) to counter the spread of the disease.

Started by Stanford University researchers Debayan Saha and Shashi Ranjan in 2017, PerSapien strongly believes that good health is the birthright of each (Per) human being (Sapien).

“In simple words, you can say, highly pressurised water + high voltage electricity = micro/nano highly ionised water droplets. The result is that these water droplets oxidise the protein structure of the micro-organisms, thereby killing them,” explains Shashi.

Debayan adds that alcohols (like ethanol or IPA) are known to inactivate viruses by denaturing their protein coat. But alcohol-based hand sanitisers are useful on a smaller scale. For example, it is useful for individuals to sanitise their hands, and is also helpful to sanitise surfaces at home, offices, etc.

“However, this is insufficient in such an emergency as it is impractical to use alcohol for sanitising cities. Thus, to combat the virus at a larger scale, the entire city needs to be sanitised, for which Airlens Minus Corona (-Corona) has been created,” he adds.

The machine can travel on the streets and spray the ionised water droplets, targetting crowded places like hospitals, bus stops, railway stations, markets, etc., to sterilise the city from the spread of the virus.

“Diving deeper into the scientific research I did at National University of Singapore, I realised that oxidation is one of the most potent antimicrobial tools which can sterilise the entire city. Our technology uses an optimal combination of electric energy and water atomisation technique to induce a charge on water droplets while creating the most potent oxidative entities, Hydroxyl radicals, which can oxidise and kill the coronavirus,” he explains.

Not a commercial product

According to the founders, the startup, which is funded by Gas Authority India Limited (GAIL) and Yes Bank Foundation, is not looking to derive business gains from their invention.

Rather, the co-founders assert that the device is not for commercial sale, and they are planning to open the technology on their website so that anyone can make the device by themselves.

Debayan says, Airlens Minus Corona is not a commercial product, but it is created to serve the humanity against the coronavirus. The device is ready for use and is ready for deployment, and the startup is presently in talks with the relevant operatives.

“Considering the deadly situation India is exposed to, in order to curb the menace created by the virus, the government authorities will need such technology. Therefore, while the entire country has come together to fight the virus, we would like to contribute by giving Airlens Minus Corona technology to the government to check the spread of the virus,” he says.

The founders say they have already tested the device, and the test turned out to be positive. After seeing successful results, they have been in touch with the government to implement the device in order to sterilise public places.

Debayan Saha worked in a drone development sector after completing his bachelor’s in technology from IIT Kharagpur. He says, an interesting turn of events led him to pursue Global Biodesign Fellowship at Stanford University, California, where he invented couple of medical devices for the US healthcare system.

To create an impact in the healthcare sector back home, he returned to India and joined AIIMS in New Delhi, where he started working on air pollution as a SIB Fellow, mentored by Padmashree Prof. Randeep Guleria, Director of AIIMS, and co-invented a technology.

Shashi Ranjan started his technical career with an engineering degree in Biotechnology from BIT Mesra. He pursued PhD in Biomedical Engineering from National University of Singapore, and authored various research publications in reputed peer reviewed journals like Nature Communications, and got his techniques patented.

Shashi says, he is extremely eager to utilise his research to help people. He met Debayan at Stanford’s Biodesign fellowship. During his stay at the Stanford University, he developed an innovative and frugal medical device to solve the problem of pace-maker lead dislodgement.

After returning to India, he identified air pollution as one of the biggest problems affecting lives of all. To solve this problem, he developed a novel air purification technology with support from Pfizer IIT Delhi Innovation & IP programme.

With similar interests, Debayan and Shashi started PerSapien Innovations in 2017, and invented devices under the brand Airlens to protect citizens from air pollution, and have successfully commercialised it, touching more than half a million lives till now. Earlier, the duo also invented devices like PM Minus 2.5 to help curb vehicular pollution and also developed Airlens, which is a car air sanitiser.