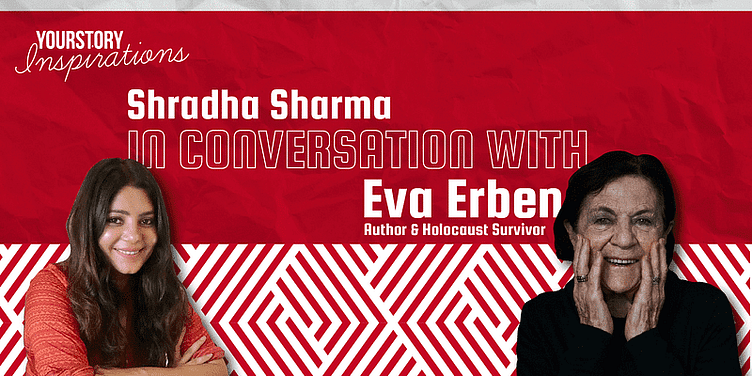 Eva Erben’s life is one of the few Holocaust survival stories that had a happy ending. Born in Czechoslovakia, Eva was first taken to Terezin, and then survived Auschwitz-Birkenau, Gross Rosen, and the Death March at the end of the war. During the march, she collapsed along the way and was left for dead, until a local farmer found her and took care of her.

﻿YourStory Media﻿ Founder and CEO Shradha Sharma recently caught up with the 89-year-old holocaust survivor on YourStory Inspirations series to talk about her incredible and moving journey.

In this conversation with Shradha, Eva shares the tale of a young girl struggling to cope with the fear and danger that becomes part of her world. Her experiences of the Holocaust is a poignant and moving story, as well as a critical historical record.

To understand Eva’s story better, it’s also important to understand the context of The Holocaust.

These institutionalised practices came to be called The Holocaust, and they began with legalised social discrimination against specific groups, and involuntary hospitalisation, euthanasia, and forced sterilisation of those considered physically or mentally unfit for society.

These practices escalated during the World War II to include non-judicial incarceration, confiscation of property, forced labour, sexual slavery, medical experimentation, and death through overwork, undernourishment, and execution through a variety of methods, with the genocide of different groups as the primary goal.

Circumstances around World War II, particularly The Holocaust, led to the birth of the United Nations in 1945 to propel human rights onto the global stage and into the global conscience.

The UN led to governments committing themselves to bolstering international peace and preventing conflict. The world wanted to ensure that never again would anyone be unjustly denied life, freedom, food, shelter, and nationality.

As a kid, Eva loved eating ice cream at the local ice cream parlour after school. One day, however, she encountered a large poster on the door of the establishment that read ‘Entry forbidden to Jews and dogs.’

“I thought it was a terrible joke as I went into the parlour to buy my ice cream. But somehow, I couldn’t eat it,” recalls Eva. The persecution escalated shortly after that incident. Soon, Eva was forbidden from going to school. The family’s car and property were stolen, and they were moved to Terezín.

Terezín or Theresienstadt was a hybrid concentration camp and ghetto in the German-occupied region of Czechoslovakia. Terezín served two main purposes: it was simultaneously a waystation to the extermination camps while also serving as a ‘retirement settlement’ for elderly and prominent Jews to mislead their communities about the Final Solution.

By 1944, however, the number of inhabitants increased. Terezín, which was originally built to house 7,000 people, now had around 78,000 people living in the ghetto.

Auschwitz and the Angel of Death

It was then that Eva and her mother were moved to Auschwitz.

“It was an unbelievable shock when our train pulled into Auschwitz. It was hard to imagine that such a place existed on earth. The smell, the shouting, and the barking were all very overwhelming. We saw the smoke from a building chimney and thought it was a factory and not the gas chamber that it really was. Then they took everything we had on us, and even shaved our heads.” adds Eva, talking about how they were counted and segregated for Dr Mengele, or the Angel of Death, who is mainly remembered for his actions at the Auschwitz concentration camp, where he performed deadly experiments on prisoners.

He was also a member of the team of doctors, who selected victims to be killed in the gas chambers, and was one of the doctors who administered the gas.

In the midst of the desolation, however, there were shining instances of humanity. “One of the German commandants noticed that I was barefoot in the extreme cold, and gave me a pair of shoes to wear. So, not every German was a murderer,” she adds.

Death marches or the forcible movement of prisoners by Nazi Germany toward the end of World War II and The Holocaust saw hundreds of thousands of prisoners, mostly Jews, from German concentration camps near the eastern front moved to camps inside Germany, away from Allied forces.

The purpose of the marches was to allow the Germans to use the prisoners as slave labour, to remove evidence of crimes against humanity, and to retain control of the prisoners in case they could be used to bargain with the Allies.

Eva, along with her fellow prisoners, was hurriedly evacuated by the SS and taken on a 500-kilometre march, walking 30 to 40 kilometres a day through Poland in the snow and cold. Her mother died on the way, leaving Eva alone in the world, but miraculously, Eva managed to escape her captors and was found and then hidden by a Czech family until the war ended.

“We were moved through the woods and not through the streets because the Germans didn’t want the civilians to see us. Those who lagged behind, too tired to go further or fell down, were shot immediately. Some women attempted to run away, but the dogs always found them, and they were killed as well.” says Eva.

The way Eva saved herself was purely accidental. After her mother’s death, there were not many of them left in the group, and they were locked inside a barn to sleep. Looking for warmth, Eva huddled beside a cow in the corner and fell asleep. “When I woke up, nobody was there; I was alone in the barn and free,” she adds.

She continued walking for four days, and was found again by a German officer who put a gun to her head, but let her go because she looked like she would die soon anyway.

Stumbling towards the Postřekov village, she was found by a local family who nursed her back to life with the help of breast milk procured through a midwife, and Eva likened it to a literal rebirth. The kind family went on to take care of her and provide her with a hiding place until the end of the War.

After the liberation, Eva was reunited with her aunt, who she lived with for a year, before going to Prague where she took a course for nurses and befriended Petr Erben, who would go on to become her husband. In August 1948, the two moved to Paris, and from there, the couple continued to Israel. Today, Eva has three children, nine grandchildren, and eleven great-grandchildren.

In Michelin-star chef Vikas Khanna’s mission to feed millions in India, failure is not an option

Reiterating the tenets of human rights

January 27, 2020, marked the 75th anniversary of the liberation of Auschwitz. However, a recent survey of 16,395 people who identified as Jewish, across 12 EU member states by the EU's Agency for Fundamental Rights (FRA), found that 89 percent of respondents said that antisemitism had increased over the last five years in the countries they lived.

Eva also speaks about the increasing need for the reiteration of human rights in the world today. We are all born free and equal, and should all be treated in the same way. Human rights belong to everybody, whatever our differences. We all have the right to life, and to live in freedom and safety.

Nobody has the right to put us in prison without good reason and keep us there, or to send us away from our country. If we are put on trial this should be in public. The people who try us should not let anyone tell them what to do.

She is especially distraught about the recent rise in antisemitism “I also don’t like everybody who is Jewish. But I don’t kill them. Let live. Let people live the way they want to,” says Eva.