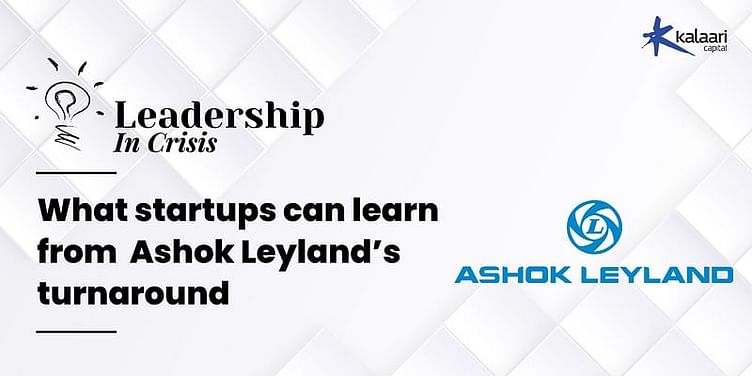 This new video series by Kalaari Capital is an initiative to learn from the crises faced by famous companies, leaders, and how they transcended their crises to new success.

Hello everyone. This is Vani Kola, Managing Director, ﻿Kalaari Capital﻿, bringing you our ‘Leadership in Crisis’ series. This is an initiative to learn from the crises faced by famous companies, famous leaders, and how they transcended their crises to new success.

We can all draw lessons and inspirations from these journeys and apply them into our own lives, and hence I look forward to sharing with you today a story from Ashok Leyland. I want to talk about making decisions at the right time, especially new leadership decisions. In 2011, it made a leadership change that had a positive, significant impact in overcoming the crisis it was facing.

Before we talk about the crisis though, Ashok Leyland was of course no startup. It had Rs 20,000 crore in revenue in 2019. It is over 60-years-old since inception. As one of the top companies in the heavy vehicle space, it perhaps has 100 million people commute on its buses and trucks on a daily basis.

It is a one of the great turnaround stories of corporate India.

So, what was its crisis? Before 2007, it had a technology partner who was also a major shareholder. In 2007, the promoters — the Hindujas — bought out this shareholder. To remain competitive, it had to make heavy technology investment, to the tune of about Rs 5,000 crore in just five years, which was, in fact, twice the amount it had ever invested in the last 60 years.

A combination of factors including, technology investments, the 2008 recession, and the downturn impacted core investments into infrastructure, which, in turn, impacted demand for core products from Ashok Leyland. All this resulted in the company being incurring a massive debt of almost Rs 6,200 crore. Due to the recession, the main business dropped by almost 50 percent within one year.

Though we all embrace incremental changes, there is always inertia and hesitation to make big changes within a business. It appointed Vinod Daasri in 2011 as the Managing Director, who is credited with the turnaround of Ashok Leyland.

There are three pivotal decisions that helped with this turnaround.

First, a defensive strategy of a massive cost-reduction programme. When revenue is declining and debt is mounting, how well you can aggressively reduce costs becomes the difference between how much time you have to truly survive and have a chance to execute any of the more innovative strategies, and this is now familiar to all of us during this pandemic crisis.

In this case, and indeed in any case where cost-cutting is successful, what helped was a high degree of transparency to be aligned to the short-term sacrifices towards the possibility of long-term gains and success.

The second necessity was expansion -- very aggressive expansion. In a declining main market, executing to new opportunities is really the only option. The push from being a south Indian company to a pan Indian company was a good start. So was the move from being not only in heavy vehicles space but also into newer products of light commercial vehicles.

The third achievement was really how, from top down, the teams were re-organised and re-focussed. The leadership strategy from being a hierarchical structure of just one PNL to making it into a much more entrepreneurial structure with 400 PNLs with well-defined ownership of revenue and profitability went a long way in making everyone accountable.

Empowering teams and making them accountable is nothing new from a leadership book, but executing them on a large scale is never easy.

Sometimes, leadership change is a necessity, and doing that in the right time can make all the difference. We more often prolong what is inevitable, and hence accumulate more losses.

Be decisive about cutting losses when you have to. Changing decision structures to keep in alignment with the new incentives and new realities of the business makes all the difference to the best of strategies being implemented successfully or not.

Lastly, in summary, the bigger the crisis, sometimes the bolder the changes that are needed. Thank you.

1) What startups can learn from Apple's revival in the 90s- http://bit.ly/KalaariPodcast_SteveJobs

2) What startups can learn from Lego's turnaround- http://bit.ly/KalaariPodcast_Lego

You can also find conversations with Business leaders such as Umang Bedi, Akshay Kothari, Shamik Sharma and Divya Gokulnath on Kalaari's Behind the Scenes series.