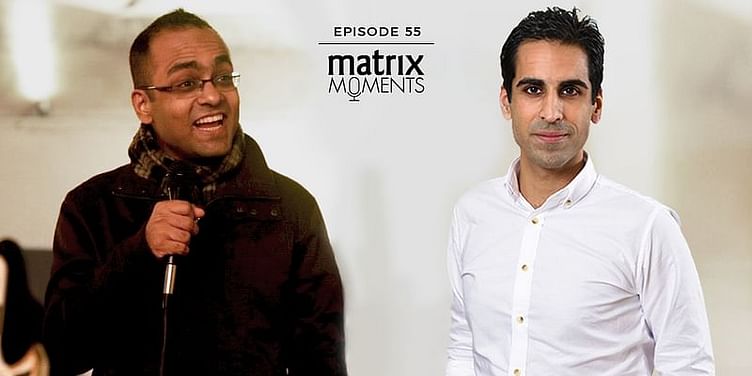 In this week’s Matrix Moments, Shashank Mehta, Founder, The Whole Truth (previously And Nothing Else), talks to Matrix Partners India’s Sanjot Malhi on building a health food brand out of India.

﻿The Whole Truth﻿ (And Nothing Else) claims to be a 100 percent clean and healthy food snack brand. In nine months, The Whole Truth has sold over three lakh bars, and boasts a following of over 90,000 consumers.

In a discussion moderated by Sanjot Malhi, Director at Matrix Partners India, The Whole Truth Founder Shashank Mehta talks about the brand journey and how it started. He worked with Unilever before building And Nothing Else, which is now The Whole Truth.

Shashank’s will to start up came from personal experience. Shashank explains that he was an obese child, and until he was 19 years old, he used to weigh 110 kg. He says he was told that no one would look at his Instagram pictures. But then he decided to lose weight and lost 40 kg in nine months.

“At that time, I had no education in fitness and weight loss. I just stopped eating, and I started running. And lost the weight, I equated being thin to being fit. So I started eating and drinking again, and gained back the weight in the next two, three years. This cycle continued,” says Shashank.

At the end of the third cycle, Shashank realised that something else needed to be done. He started researching and began writing a blog called ‘FitShit’ where he would break down the basics of food and fitness. He adds,

“People were pouring in and asking questions about what I was writing. So that was the insight that I got – that the Indian consumers, at least some of them, are ready to get fit. They are worried about their food choices and want to know a lot more. Today's brands are not doing justice to what the consumer is asking for. I've seen marketing from the inside, and oversaw food and fitness at Unilever. So, the culmination of these two things led to starting up.”

Explaining what made Matrix invest in a pre-product and plan stage, Sanjot adds it was Shashank’s mission and the purpose to build the brand. That, combined with a very specific market problem that consumers suffer from, got the Matrix team excited.

“It was during my notice period at Unilever when I received a call from you (Sanjot). I was quite surprised because I had no clue that a fund like Matrix would be interested in doing a proper pre-seed investment in a CPG company,” says Shashank.

Apart from a personal pain point, Shashank also believes the food and fitness, depending on how you define it and what figures one sources, is $1 trillion to $4 trillion industry globally. This industry is growing at twice the rate of the global GDP, and yet, all markers — obesity, heart disease, diabetes — are at all-time highs.

“Even in a country like India, till about 15 to 20 years ago, we used to only have 12 percent people who were overweight. That number has gone up to 20 percent. That number for the US is 40 percent and growing. So how is it that the people who are supposed to solve this problem are increasing, and yet the problem is worsening? Clearly, something is broken,” Shashank examines.

However, the market is cluttered. Thus, Shashank decided to focus on food.

When The Whole Truth was launched nine months ago, the team started receiving positive responses early on.

“In fact, people started asking us, ‘are you sure this is healthy? Because it is this tasty’. Our food philosophy told us that when you use good ingredients, food automatically becomes tasty,” says Shashank.

Focus on the brand

The next step he realised was to engage people.

“Instagram is perhaps the only social media platform where we're really active. And if you scroll through our feed, 60 percent of the posts don't even have our brand logo on it because we're talking about whole wheat bread versus white bread, sugar versus honey versus jaggery, etc. I'm talking about these because they matter to my consumer,” explains Shashank.

The next big step came during the lockdown. Shashank realised that the problem with packaged food was that often, the ingredients were not mentioned up front.

“The industry has made a science out of obfuscating facts. Why is it that my oat cookie, which is sold to me as healthy food, has just seven percent oats in the list of ingredients? Why is it that my protein pack cookie has only two grams of protein? And why is it that my sugar-free chocolate has maltodextrin, which is worse than sugar?” he questions.

Shashank realised that to ensure transparency, they would have to think bigger than just bring the ingredients to the front of the pack. He adds,

“So we changed the branding from ‘And Nothing Else to The Whole Truth’ not to fix ourselves, but to fix the ecosystem. It was a decision that came from the heart and the gut,” he says.

He explains that the larger vision is to rebuild the world's trust in food. Shashank believes that there are two things they need to do to rebuild that trust: One is to put out content that people can look to educate themselves. The second is to not just remain a bystander, but provide an alternative through the product.