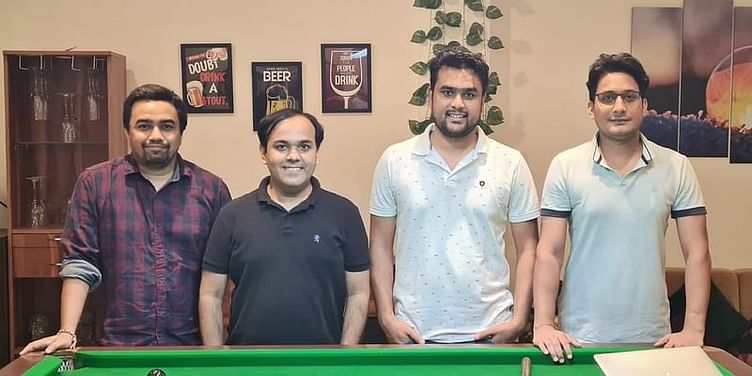 2020 has been the year of edtech startups. The COVID-19 pandemic has pushed learners as well as teachers to embrace the virtual world, bringing edtech platforms to the centre stage. One such platform is Noida-based ﻿Spayee﻿, a white-labelled course SaaS platform, which lets anyone create, market and sell their courses online.

Started in 2014 by Sandeep Singh, Gourav Kakkar, Aniruddha Singh, and Vijay Singh — all in their early thirties, Spayee is selected as one of YourStory’s Tech30 startups this year for allowing content creators to produce customised courses in the form of audio and video tutorials, PDF documents, quizzes, assignments, and live classes. The platform hosts integrated discussion forums for clearing doubts, has automated payment gateways, along with sales and marketing funnels.

To maximise the benefit in the times of coronavirus, Spayee reprioritised its product development pipeline with features like live classes and more interactive tools on the platform.

“Seeing the growing demand, we doubled our team size to 25 within the lockdown itself. We outsourced hiring and marketing so that we can focus on the core product and sales,” tells Sandeep Singh, Co-founder, Spayee.

He also adds that what demonetization did to fintech companies, the pandemic has had a similar effect of creating opportunities for e-learning platforms. “The kind of growth we were expecting in one year, we achieved in four months of lockdown,” Sandeep quips. The response was so overwhelming that Spayee turned profitable amidst the pandemic, which also encouraged the company to capitalise on the spike in demand of edtech solutions during the pandemic.

While Sandeep did not share the startup’s specific growth metrics for the last six months, he said that since its launch in 2018, Spayee has grown rapidly over the last two years and today, it has more than 1,000 paid customers using its platform to launch and sell their courses.

“Spayee has helped its customers generate total revenue of Rs 200 crore through the sale of an enormous array of courses. Our customers have launched more than 25,000 courses which are being consumed by more than three million users from across the world,” shares Sandeep.

Noida-headquartered Spayee Labs was started in 2014 but the product was launched only in 2018. The co-founders met each other while working for a US-based publishing company. Aniruddha and Sandeep were also preparing for UPSC exams. For the preparation, they used to collect notes from different sources like newspapers, magazines, YouTube videos, and other websites. “Proper management of these resources was a task in itself. Bookmarking was an option but was not very effective,” says Sandeep.

He adds that finding the solution to this problem was core to the idea behind Spayee Labs’ very first product – an intelligent e-book platform where topics are automatically updated with related resources from the pre-defined sources. The other two co-founders – Gourav and Vijay – joined in to build the product. The team pitched the idea to Times Internet and got funding and incubation under the TLabs programme.

Then came the Jio wave in 2016, when video content boomed in India and creators became king. The team quickly realised the need for an end-to-end online course platform which wouldn’t just support e-books, but also play host to the entire gamut of multimedia content. “That’s how the story began. And by 2018, Spayee had launched its course platform,” he recalls.

Edtech is a very broad sector and is often divided into two major categories – formal and informal. While the formal segment usually deals with schools and colleges, the informal segment has a plethora of models such as test prep, skill development, financial institutes, yoga and wellness centres, film and music schools, individual coaches, corporate trainers, YouTubers, and other niche categories.

“Having an all-in-one online course delivery platform allows us to also go beyond edtech,” says Sandeep. For instance, the newest addition to the platform is a course on how to build a subscription-based platform for delivering courses and OTT content.

He further adds that India only has about one million content creators, which include individual educators, trainers, coaches and YouTubers. The $735-million edtech market is still in its nascent stage but is growing rapidly. “It’s still day one for us,” he quips.

Among the likes of homegrown edtech unicorns such as BYJU’S and Unacademy, Sandeep, says that Spayee has positioned itself quite well in the market as a premium product, and that is why it stands out from other players.

Spayee follows a purely transactional revenue model through SaaS licensing. It offers a subscription-based service where customers pay a fixed monthly fee to use the platform. The monthly license fee varies from Rs 3,000 to Rs 15,000 per month, depending upon the plan.

The startup recently raised funding of $150,000 from one of their customers. The company is now planning to raise the next round of funds to grow, build a team, and scale up its reach.

“Over the next year, we want to help our customers generate over Rs 1,000 crore in course sales revenue and onboard 5,000 paid customers by the end of 2021,” concludes Sandeep.