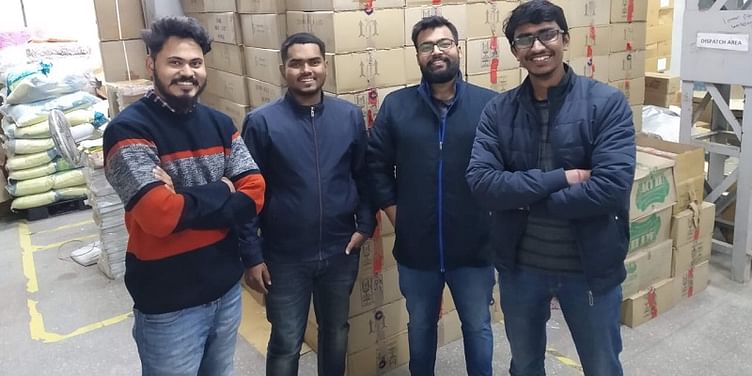 Opening a string of delivery-only restaurants on aggregators such as ﻿Swiggy﻿ and ﻿Zomato﻿ is quite the trend, but high rents coupled with inventory and supply chain mismanagement can shutter them just as fast. That’s where SupplyNote checks in.

"Usually, restaurants suffer huge losses due to mismanagement of inventory,” says Kushang, who uses only one name.

“They also face challenges while procuring material when they need to be sure of the best cost and availability. The current offline model is inefficient and costs the restaurants about 8-10 percent of the bottom line. With SupplyNote, food businesses such as restaurants and bakeries can increase their bottom line.”

Notes on a business

The four founders first met at IIT in 2011 and started their entrepreneurial journey immediately after graduating in 2015. They helped brands run trackable below-the-line advertisements — promotion beyond mainstream media — on food packaging items. They eventually started delivering food packaging material to restaurants and eateries using their own B2B ecommerce platform.

Working closely with these establishments helped them understand the needs of the restaurant business. They realised the problem lay in the procurement process rather than product discovery. That became the springboard for SupplyNote, which digitises the procurement process and automates steps such as inventory management, digital ordering, payment ledger management, and supplier and product discovery.

According to Statista, India’s food and beverages industry is projected to record revenue of $7.6 billion in 2021. The revenue is expected to grow 10.4 percent annually, resulting in a projected market volume of $11.3 billion by 2025.

“In the organised sector you have two formats, chain restaurants and standalone restaurants. In the past couple of years, there has been a paradigm shift in India and a major requirement for these restaurants is standardisation of processes, both on the front and back ends. It is here that we play a catalyst for businesses.”

With SupplyNote, such restaurants can manage inventory, place orders, and uncover sales performance insights to boost the health of their business. “This typically lowers cost of operations and translates into higher profits,” says Kushang.

How the service works

After the customer — a restaurant or eatery business — signs up and requests a demo on the SupplyNote website, the team explains the use case and how the solution would benefit the establishment.

To avail the solution, the customer pays a licence fee of about Rs 20,000 annually per outlet. SupplyNote then gets the restaurant on board the platform by entering all the requirements, recipes, and inventory details.

“We sync the solution with the PoS (point of sale) systems of the restaurant to have the details on their sales,” says Kushang. “These details help the solution to analyse and reach different levels of inventory SKUs (stock-keeping units), which are being procured by the restaurant. This understanding enables us to connect with suppliers for requirements automatically.”

Suppliers have their own SupplyNote dashboard, which reflects the purchase order. They can accept the purchase order and convert it into an invoice on the same platform and ship the order. Here, automated ledgers are created for buyers and suppliers. “The restaurant can pay its vendors on the platform without hassles,” says Kushang.

A Noida-based rolls restaurant brand was SupplyNote’s first customer in 2019. The restaurant wanted a supply-chain automation solution. At present, the startup has more than 1,200 clients on its platform.

SupplyNote is backed by several investors. The startup raised a $600,000 bridge round from SucSEED Venture Partners, Venture Catalysts, CIO Angel Network, 91springboard, GHV accelerator, Das Capital, and SOSV. It has raised three other rounds: seed of $115,000, bridge of $335,000, and $550,000 pre-series. In total, the founders have raise $1.6 million.

The challenge for SupplyNote has been to get small businesses on board with its digital solutions.

“They are key to our vision of digitalisation,” says Kushang. “However, the adoption of digital solutions in their conventional supply-chain procedures is still very slow. They are yet to embrace the digital revolution at a number of levels, which is a hindrance to our business.”

The other problem has been to convince people to move their operations online, he adds.

SupplyNote wants to achieve a transaction volume of 100 million by the end of 2021, for which it is strengthening its sales channels to engage with more customers.

The startup closed FY20 with $1 million in revenue and expects to end the current fiscal (FY21) with $1.4 million, growing at 30 percent.