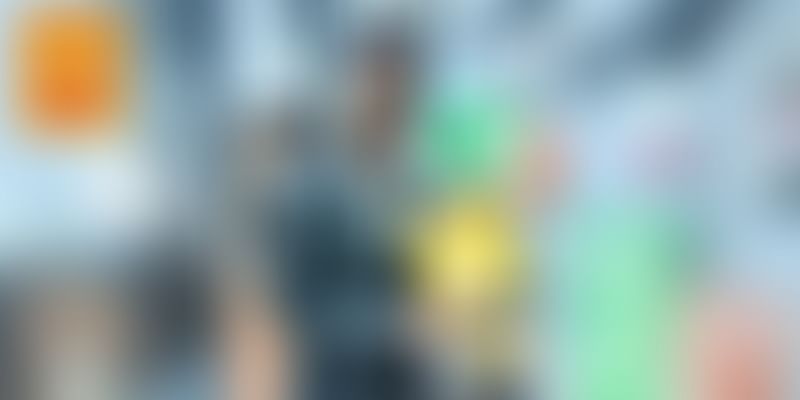 Bhagalpur-headquartered agritech startup Saptkrishi has developed Sabjikothi or Preservator, a wheel-mountable, microclimate-based storage solution that is cost-effective, portable, and extends the shelf life of fruits and vegetables from three days to 30 days.

India is the second-largest producer of fruits and vegetables in the world. However, this abundance also brings along produce spoilage and wastage.

The Food and Agriculture Organization (FAO) of the United Nations says 40 percent of horticultural produce worth $8.3 billion is wasted every year due to inadequate logistical support, lack of refrigerated storage, supply chain bottlenecks, poor transport, and underdeveloped marketing channels.

The startup launched its first product, the Sabjikothi or Preservator, a low-cost, IoT-enabled chamber-cum-storage that can be used to extend the shelf life of horticultural produce from three days to 30 days. The wheel-mountable, microclimate-based storage is cost-effective and portable.

“The produce wastage numbers are worrisome, but what is even more concerning is the ground reality of small and marginal farmers.  Small landholder farmers have to commute daily to big mandis, and significant water loss is experienced during transportation. They have to sell their produce at half price in the late evening due to short shelf life and lack of storage options to keep it fresh. Sometimes their produce is destroyed by stray animals or drunkards,” says Nikky Kumar Jha, Co-Founder and CEO of Saptkrishi.

This causes direct economic losses to farmers, and is unaccounted for in the supply chain. Nikky says this gap in the agri-sector needed a technological innovation, which is where Sabjikothi, a storage and transportation solution, steps in.

Saptkrishi is at present being accelerated at IIT-Kanpur. It was earlier incubated at IIT-Patna and has been doing paid pilot trials through various public and private collaborations such as with the Indian government, Bill & Melinda Gates Foundation, and consulting firm Microsave.

Apart from two co-founders, the startup has a team of 10 with expertise in engineering and environmental sciences. “We have people from IITs and other reputed business schools working with us,” Nikky says.

Born and brought up in Bihar’s Bhagalpur, a small town that is a big hub for production of fruits and vegetables, Nikky observed that a large chunk of the produce did not make it to the market at all and was wasted due to various reasons: the extremely short shelf life, and underdeveloped storage, transportation, and cold chain facilities.

Keen to help the farmers in his region, Nikky began thinking of the problem statement while doing his master’s programme at Nalanda University (Rajgir, Bihar). He designed a solar-powered, micro cold storage for his dissertation. However, it needed a large initial investment and did not function properly during monsoons, and was forgotten at that time.

Later, Nikky discussed the problem with his family at the dinner table and his younger sister, a biotechnologist and now co-founder, suggested using a non-cooling technique for preservation.

“After a lot of research, we finalised the idea of creating a microclimate on a portable setup. And that is how we came up with Sabjikothi or Preservator,” he says.

The founders say Sabjikothi extends the shelf life of perishable horticultural produce through the construction of a high-humidity, sterile isolated chamber of plasma (ionised air), which oxidises ethylene (hormone that fastens ripening of fruits and vegetables) into small molecules, delaying browning and ripening, and regulating the activity of the antioxidant enzymes.

“It requires only 20 watts of power and has a battery back-up of one day with an option of solar charging,” Nikky says. He adds that the Sabjikothi can be assembled on any suitable means of transportation, be it e-rickshaw, mini trucks, or thelas (hand carts), and can transport contamination-free and pathogen-free fruits and vegetables from the field to the market without any water loss or decay.

Nikky says the USP lies in the fact that it is a zero-chemical, non-cooling, and completely green technology priced at Rs 10,000. “It is a valuable one-time investment and will last multiple harvest seasons. It increases the RoI for farmers and traders, and opens new opportunities and bigger markets,” he says.

The startup is still at the early stage and is conducting paid pilot trials with its partners like BMGF, ICICI Foundation, Ernst & Young, and Aapka Family Farmer Producer Company Limited, at various locations in India.

“We plan to create awareness about our product by organising demo days in agricultural mandis and rural areas. We are developing multiple sales channels and also offer easy renting of Sabjikothi for enterprises or businesses in need. We plan to create a dealer and distributor network apart from direct sales to institutions, hostel messes, micro-entrepreneurs, etc,” Nikky says.

In the last one year, Saptkrishi has deployed more than 40 units and is working on more than 350 pre-orders. “Our business model does not revolve around making profits, but rather around solving problems faced by farmers. In the coming year, we aspire to solve the problems of more than 10,000 farmers and traders; that’s the goal of our social enterprise.”

Nikky says the wastage of horticultural produce has been a major challenge in the agriculture sector, and Saptkrishi is “not the first one to try and solve it”. He adds that many people have proposed solutions from time to time. “One such alternative is cold storage units, but they are usually located in distant city centers and mostly filled with potatoes and apples. They also need high initial investment and maintenance with uninterrupted 24X7 power supply, making them inaccessible for small farmers.”

He adds that other storage solutions like small, micro cold storage or controlled atmosphere units also need high investments and technical manpower for operations, which is not feasible in a rural set-up. “Chemical wrapping can also be used for preservation, but it has negative health impact.”

The founder says Sabjikothi provides a completely decentralised and cost-effective solution as the product requires very little power and can be assembled on any means of transportation, making it ideal for small and marginal farmers.

The siblings raised funding of Rs 10 lakh for research and development via Nidhi Prayas with IIT-Kanpur, which will come in multiple tranches. They have received a similar grant from IIT-Patna as well. The startup has raised a pre-seed round of Rs 15 lakh from Invent, Villgro, and several awards and grants of undisclosed amounts to make Sabjikothi market-ready.

Nikky says most funds have been used for R&D.

In the future, Saptkrishi plans to expand and scale up its business in India and abroad with the help of a second round of funding next year.

“Our focus this year is to scale business by setting up omni-channel sales through trade fairs, FPOs, and digital mediums such as ecommerce and social media. Going forward, we want to eliminate mandi intermediaries by purchasing produce from farmers at a fair price and selling directly to retailers via an app,” Nikky says.