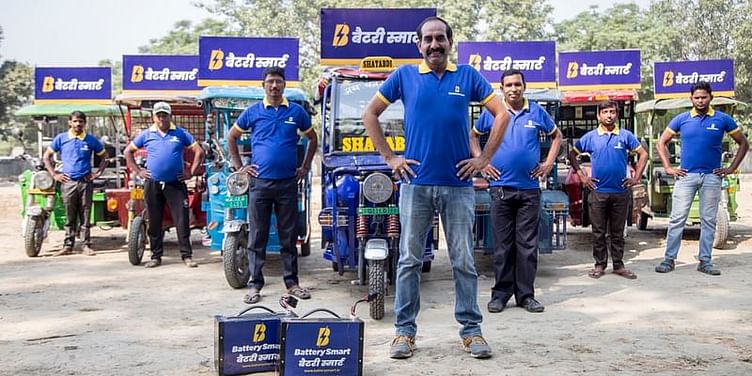 About 80 percent of all electric vehicles in India today are e-rickshaws, as an increasing number of rickshaw pullers are shifting to affordable and cheaper means of clean transportation.

However, e-rickshaws come with their own set of challenges, including a battery charging time of up to 10 hours, limited revenues, and investment in expensive new batteries.

The replacement cost per battery is Rs 25,000-Rs 28,000. Lead-acid batteries usually weigh close to 80 kilograms, which reduces vehicle mileage. As the battery cannot be refurbished, an e-rickshaw owner typically returns it to the vendor after it has run its life.

Founded in 2020, with a vision to impact the livelihoods of the e-rickshaw community, Delhi-based electric mobility startup Battery Smart is aimed at building India's largest network of EV-battery swapping stations.

What does it solve?

IIT Kanpur batchmates and friends for over eight years, Pulkit Khurana and Siddharth Sikka have extensive experience when it comes to consulting in startups, having previously worked on several mobility initiatives.

They co-founded a mobility startup called Pods in 2015, as an app-based intra-city bus pooling service in Gurugram. However, it was operating in a market that had big players like Shuttl, and could not compete.

Post this, Pulkit immediately joined Shuttl to further his interest in that space, and worked in the company for four years. He became the Head of Supply and quit in October 2019 to start Battery Smart.

With Battery Smart, e-rickshaw drivers have access to a retrofittable Li-ion battery-as-a-service solution that provides them with a ‘two-minute battery-swapping facility’.

With a team size of nine members, Battery Smart provides advanced Li-ion batteries to e-rickshaws on a subscription basis. A driver can stop at any of the company’s partner swapping stations, which are currently available at 26 locations in South West Delhi and get a fully-charged battery against a discharged battery.

Partners manage their stations through Battery Smart’s mobile application. Drivers are authenticated via the partner app and based on usage, drivers pay the service amount to partners.

Partners work on a revenue share model with Battery Smart, and transact using the same app. Partners earn Rs 5,000-10,000 per month after expenses

Its USP and how the startup differentiates itself from others in this space is by operating in an asset-light manner by partnering with local businesses as swap station partners.

Pulkit says instead of opening their own charging stations, which would include investing additional cost and time, they decided to partner with local small stores in high-density neighbourhoods along the high traffic routes.

“Our low-cost, compact, and low-maintenance battery swapping units can be installed at small shops and by individuals, enabling the shop owners to earn an additional source of income without any added labour or real estate cost,” mentions Pulkit.

“Battery Smart is rapidly expanding its footprint by onboarding swap station partners on its technology platform and providing them with an additional steady stream of income, hence locking in the supply. There are inherent network effects in our operating model as the Battery Smart proposition becomes more and more valuable for drivers as more station partners sign up on our swap technology platform,” Pulkit says.

As per a report by Avendus Capital, the EV market is likely to be around Rs 50,000 crore by 2025, with two- and three-wheelers being increasingly electrified in the medium term due to COVID-19 disruptions. It also stated that as much as 40 percent of the e-rickshaw market is expected to shift to lithium-ion batteries.

The startup considers Sun Mobility, Bounce (for Bounce fleet two-wheelers), and Oye Rickshaw (for Oye fleet three-wheelers) as some of its competitors. However, its strategy of onboarding local shop owners as swap stations partners makes them stand out.