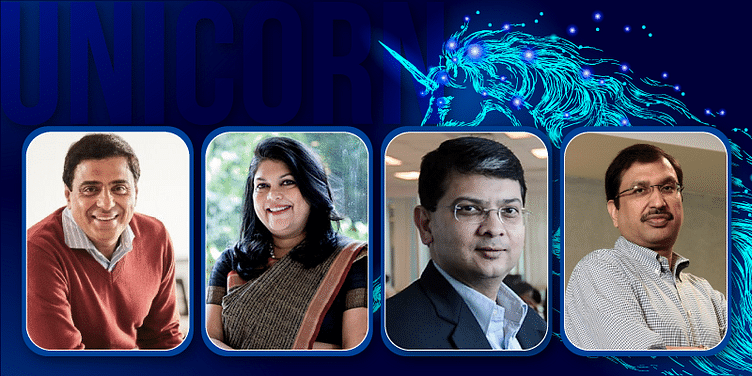 Successful businesses = young founders? Think again! The Indian startup ecosystem has more than 50 unicorns, of which 10 are founded by seasoned entrepreneurs who are in their 50s. Five of these startups entered the coveted unicorn club in 2021.

When it comes to tech startups, many envision young techies and founders at the helm of such companies. However, age is not a criterion for startup unicorns.

While some started after gaining significant corporate experience, for others, this isn’t their first rodeo. Some of important ones are MN Srinivasu, Jagadish Moorjani of Citiustech, and Sudheer Koneru of Zenoti.

Here’s a look at some entrepreneurs in their 50s, who have got their startups membership in the coveted billion-dollar club:

Ronnie Screwvala is no stranger to the business landscape. One of the most well-known faces in the Indian startup ecosystem, Ronnie founded the UTV Group in 1990 and expanded it into a media conglomerate.

He is also a private equity investor who started Unilazer Ventures, which invests in early-stage startups.

Today, he is the co-founder of edtech unicorn UpGrad. The Mumbai-based startup is now valued at $1.2 billion after raising $185 million in a continuous round led by Temasek ($120 million), IFC ($40 million), and India Infoline Finance ($25 million).

Commenting on the new unicorn status, the Founder-Chairman said, "We are pleased with the investor interest ever since we opened up for a fundraise and had our maiden raise from Temasek, followed by IFC and IIFL in the last 60 days. We will announce further updates on M&As and unlocking value as they unfold. The valuation is at $1.2 billion, but as I keep saying, we are not a fan of the tag 'unicorn'. For us, it is only a means to a much larger goal."

upGrad is India's newest unicorn after IIFL infuses $25M at a $1.2B valuation

The upcoming Nykaa IPO has put the spotlight firmly on Falguni Nayyar, who launched the online beauty startup in 2012.

Today, as the omnichannel beauty retailer eyes the public markets, the banker-turned-entrepreneur is making history and raising the bar for women entrepreneurs.

When Falguni founded Nykaa, the beauty segment was new, and the D2C business model was not as popular as it is today. In fact, the startup broke the myth of ecommerce and beauty retail not working in tandem in India.

As a stockbroker and investment banker, Falguni had come in contact with many businesses and was able to size up the market, translate business plans, and understand the financial projections of a project. Moreover, she had helped businesses with their IPOs.

As Falguni had once said: “As a woman entrepreneur, I believe in Sheryl Sandberg’s statement that women actually want to lean in as they are constrained by themselves. We do not want to go for it. I tell women to learn to dream — and then you will get where you want to get. There was no glass ceiling for me.”

Kamesh incorporated Digit Insurance in 2016. However, the company got licences for its planned products and started operations in November 2017.

Sensing an opportunity, the Fairfax Group picked up a 45 percent stake in the digital insurance entity for Rs 350 crore, in what was one of the largest for startups in the digital insurance space. In July this year the company raised $200 million from existing investor Faering Capital and new investors Sequoia Capital India, IIFL Alternate Asset Managers, and a few others

He said, “The insurance industry has seen lots of changes in the last 15 years in India. Unlike other sectors, we have not seen insurance companies redefining the customer experience. Further, only 29 percent of insurance customers are satisfied with their current providers, and we hope to change that.”

The story of Beerud Sheth, Co-founder and CEO of smart messaging platform Gupshup, is not that of a typical Indian engineer. After studying computer science engineering at IIT Bombay, Beerud got into a flight to the US and paved his career path.

An alumnus of the Massachusetts Institute of Technology (MIT), Beerud kick-started his career at Wall Street. He worked for Citibank and later for Merrill Lynch, where he modelled securities and traded them. He considers this as his business school experience that eventually led his way into entrepreneurship.

In 1998, Beerud went on to co-found Elance (now Upwork.com), which pioneered the gig economy. In 2015, the Elance-oDesk merger was rebranded as Upwork, which went for an IPO in 2018.

After leaving Elance, Beerud was approached by Rakesh Mathur, an accomplished entrepreneur in Silicon Valley. In 2014-15, the duo started Webaroo — an offline search engine. The idea didn’t work, and the team pivoted the startup.

Around 2007 and 2008 when the mobile phones became revolutionary and experienced mass-market adoption, Rakesh and Beerud decided to leverage the power of SMS and rebranded Webaroo to Gupshup.

“Users could publish their thoughts like tweets, and people could follow them and receive messages,” Beerud explains.

From a Wall Street trader to an entrepreneur, the journey of Gupshup Co-founder Beerud Sheth

The journey of Icertis — from a company that built multiple cloud-based applications to a leading enterprise contract management platform in the cloud — has been serendipitous. It took a chance meeting to put the founders on this track.

During a morning walk in April 2014, Samir and his friend Pradeep Singh, the Founder of Aditi Technologies, were talking about Icertis, then in its fourth year.

The company was generating a couple of million dollars in revenue and was bootstrapped with an investment of a million dollars. Samir told his friend that Icertis was doing well and offered four cloud-based products.

Now, it has raised $80 million in a Series F round, becoming a unicorn at over $2.8 billion valuation.