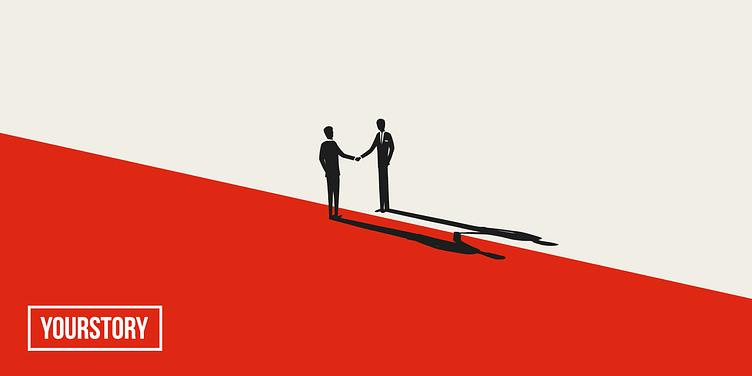 The Indian startup ecosystem has rallied sharply despite the pandemic. The year 2021 has till now recorded M&A value of $3.8 billion as compared to $1.3 billion in 2020, and the momentum is likely to stay strong.

The year 2021 has been a defining one for the Indian startup ecosystem in more ways than one — record amount of fund inflow, creation of new unicorns, companies going public, and a new benchmark in terms of mergers & acquisitions (M&A).

The number of M&A transactions since January 2021 till now stands at 119 as compared to 86 such deals for the whole of 2020, according to YourStory Research. This amounted to an M&A value of $1.3 billion in 2020; in 2021, the figure hit $3.8 billion. These are only the disclosed deals; majority of them are undisclosed and the value may actually be higher.

And there’s likely more to come, considering that we are still almost five months away from the end of the year.

The strong M&A momentum in the Indian startup ecosystem can be gauged by tracking the edtech unicorn BYJU’S, which has invested a little over $2 billion to acquire seven companies this year.

The strong health of any ecosystem can be gauged by two elements: the amount of investments that come into the segment and number of M&A deals. On both these counts, the Indian startup ecosystem stands on a firm ground notwithstanding the ongoing COVID-19 pandemic.

In June, YourStory highlighted how startup funding in India was on track to hit record highs in H1 2021 and exceed 2020 levels. A similar scenario is likely to play out on the M&A arena.

The big highlight of the M&A activity this year has been the growing ambition of Indian startups who are taking bold bets - acquiring established businesses that could be arguably described as old economy.

For example, digital investment platform Groww acquired the mutual fund business of Indiabulls for Rs 175 crore. On the other hand, fintech startup BharatPe, through a joint venture with Centrum Financial Services, has taken over the troubled financial institution Punjab and Maharashtra Cooperative Bank (PMC Bank). It plans to infuse around Rs 1,800 crore into PMC Bank.

And then there’s the acquisition of listed diagnostic chain Thyrocare by online pharmacy startup PharmEasy in a deal valued at Rs 6,334 crore.

This heightened pace of 2021’s M&A activity is rooted in 2020 when numerous transactions were undertaken by various startups and corporates, notably Reliance Industries.

These include the acquisition of DHFL General Insurance by Navi Technologies, launched by Flipkart Founder Sachin Bansal in January 2020. Other unicorns such as BigBasket, Unacademy, Ola Electric, Zomato, and Urban Company have all undertaken the M&A route.

But the blockbuster deal for the Indian startup ecosystem in 2020 was the acquisition of WhiteHat Jr by BYJU’S for $300 million.

This momentum of M&A activity has picked up pace in 2021, with the biggest entry made by Tata Group which has accelerated its reach into digital businesses – an arena till now dominated by startups.

“Consolidation has started to happen in several segments like foodtech delivery and logistics aggregators where those startups that are unable to raise the next round of funding will look at the M&A option,” Madhur says.

In this year, witnessed unicorns and leading ecommerce companies like Amazon and Flipkart have continued with their M&A strategy. Flipkart acquired majority stake in travel aggregator Cleartrip in March while Amazon bought tech startup Perpule in the same month.

If a logistics unicorn like Delhivery acquired SaaS startup Primaseller, BYJU’S bought out an old economy setup like Aakash Education in a transaction estimated at around $1 billion.

The spurt in M&A activity is also likely to be the result of higher capital inflow into the Indian startup ecosystem, with investment companies scouting for businesses that can provide them with good yields.

“The increased inflow of capital has triggered M&A activity as startups are looking at leadership positions. Startups are willing to take a higher risk through M&A for market leadership or acquiring skillsets,” says V Balakrishnan, Partner, Exfinity Venture, an early-stage venture capital firm.

As leading startups, especially unicorns, look at expanding their reach, it is also leading to emergence of new spaces. For example, the acquisition of social commerce startup Shop101 by InMobi reveals the unicorn’s interest to enter the space of live commerce.

The segments that witnessed most M&A transactions are technology, edtech, and fintech.

Other segments, including consumer internet, automotive, hyperlocal, or even SaaS, have also witnessed reasonable amount of transactions.

A former CFO with a edtech unicorn who has now turned entrepreneur says, “A lot of M&A activity is happening within the ecosystem; very few are being made public.”

The cities that saw the maximum number of M&As for 2020 and 2021 till now are Bengaluru, Mumbai, and Gurugram. This should not come as a surprise as these three destinations are important startup hubs.

Interestingly, the highlight of the M&A action for the Indian startup ecosystem this year has been the strong foray made by the Tata Group. After the acquisition of BigBasket, the Tata Group has followed it up with startups like 1MG and an investment in Mukesh Bansal-led CureFit.

Following this announcement, N Chandrasekaran, Chairman, Tata Sons, said: “The CureFit partnership with an industry-leading platform in fitness and wellness aligns very well with our overall healthcare proposition where fitness is increasingly becoming an integral part of a consumer’s life.”

The M&As bode well for Indian startups and corporates – the partnerships give the former a stronger platform and the latter access to new markets.

Why these global mergers and acquisitions fell apart

On large corporates acquiring Indian startups, Madhur says, “This is a good development as it will make many services mainstream and also push many startups towards profitability. In general, it will improve economics.”

This also reflects the strength of the Indian startups as a significant number of leading corporates do not possess the requiste capability for making their presence felt in the digital economy. So, a partnership or M&A is the only viable option for them.

The number of M&A transactions for the year till now is a very strong sign for the startup ecosystem and expectation is rife that this is likely to continue for the rest of the year. It is likely that the key segments of healthtech, SaaS, technology, and B2B ecommerce may actually witness increased traction from a M&A perspective.

As V Balakrishnan says, “Once a startup gets funding, it needs to deploy it for organic growth or look into ecosystem for technology, market leadership through an inorganic route.”