From Zomato to Nykaa, what the current IPO boom means for the Indian startup ecosystem 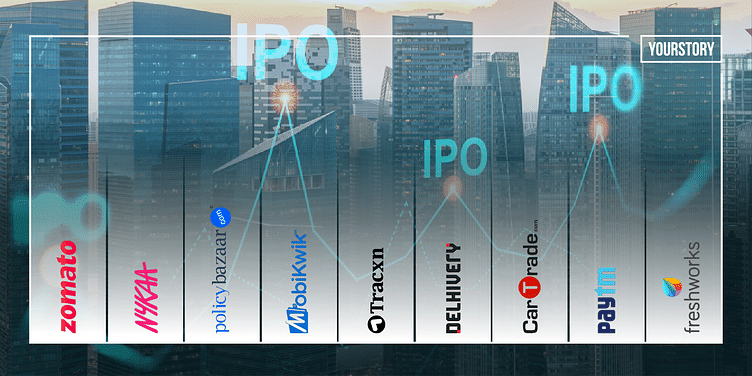 With more and more Indian startups filing for an IPO, YourStory dives into what this means for the ecosystem, and how it will help bring even more capital for early-stage startups in the country.

Traditionally, in India, initial public offerings (IPOs) have been seen as a benchmark of maturity on part of the company going public.

In the yesteryears, market regulations required an IPO-aspirant to be profit-making for at least three years before it took the primary market route and onboard broader set of investors, including retail investors which the market regulator — Securities and Exchange Board of India (SEBI) — thought of being the most gullible.

However, for the longest time, ‘profitability’ was sort of a daydream for venture capital (VC) backed startups that are offshoots of ideas to solve problems with the smart use of innovations or technology.

Back in 2010, when Deep Kalra, Founder of ﻿MakeMyTrip﻿, chose Nasdaq for listing, internet businesses were deemed to be risky and there was a certain lack of understanding of their operating models that could hamper the prospects of the issues’ sailing-through.

In 2013, when JustDial went public, it was the first company to adopt the ‘safety net’ scheme for retail investors, which was proposed by SEBI. A buyback would get triggered after six months of the listing if the volume-weighted share price fell below the issue price in the two months prior to the completion of six months since listing.

This safety net was the promoters’ show of confidence, and the double discount made the offer lucrative for retail investors as well as provided the much-needed comfort to SEBI. Together, they were an assurance to the company at its financial backer that the IPO would sail through.

However, with time, promoters, their VC-backers, and more-so, the IPO investors have shown a much higher degree of maturity in embracing problem-solving solutions where a good business model is welcomed, and the consistent loss-making tag is overseen.

General investors have begun to take long-term calls, a peculiar experience startup founders are accustomed to from angel investors and VCs.

Zomato’s killing opening on the bourses in July is a strong point in case. And what has followed is a flurry of IPO-aiming activity by the Indian startups — ﻿Nykaa﻿, ﻿PolicyBazaar﻿, ﻿MobiKwik﻿, ﻿Tracxn﻿, ﻿Delhivery﻿, ﻿Cartrade﻿, and ﻿Paytm﻿. Another notable mention is Freshworks, but the SaaS giant has listed in the US.

Speaking of the boom and what it means, Shripati Acharya, Managing Partner, ﻿Prime Venture Partners﻿, says, “All these are signs indicative of companies that have potential and are getting accepted by both the institutional and retail investors.”

He points out that the boom also endorses the fact that India always had a vibrant stock market.

“Another interesting trend is that Indian investors have now realised that companies that have a big tech component can actually be focused on getting that scale before they start making a profit,” Acharya adds.

He explains this reflects a maturity of the tech companies and ecosystem, further highlighting that the volumes of companies that are going to follow the IPO route in 2022 are going to be significant.

Back to the basics: Girish Mathrubootham on finding happiness in the smallest of things

For VC investors like Acharya, the IPO boom means that early investors do not have to rely on acquisitions, or mergers and acquisitions (M&As) and secondary exits to get an exit.

“IPO in Indian markets is going to be a viable option,” he says, “Indian markets have been fairly generous in their valuations, which is good for investors all around.”

Overall, with a total over-subscription of 38.25 times, Zomato’s IPO indicated that there was no dearth of liquidity for the otherwise loss-making foodtech unicorn.

Rather, Acharya opines that these categories of companies will not only start emerging but will also start dominating the discourse of the stock markets.

“Tech is no longer a niche vertical. Everything we do in our lives is touched by tech. That is why Zomato, which is loss-making could go public, because of the growth and the moat it has,” he says, “This is a systemic and secular change in the Indian IPO landscape, and this bodes well for the Indian startup ecosystem.”

Rahul Khanna, Managing Partner, Trifecta Capital, adds that the primary markets’ current embracement of loss-heavy startups is not an overnight occurrence; it was decades in the making. He explains much of the IPO exit activity is happening as these tech giants have significantly grown over the years.

“There has been a built-in demand for more tech companies, and these have achieved scale and can go out and list,” says Khanna.

On the companies that are listing, Khanna believes these are companies that have seen 50 percent plus year-on-year growth for many years, and many of them can continue to grow at 30-50 percent for the next five to ten years.

In Khanna’s view, that growth curve is very important. “That's why investors are paying a premium for a private company versus a traditional one,” he adds.

Khanna also points at a geopolitical factor here in the form of recalibration of the US-China relationship, which in turn, led to people reallocating capital in other markets.

“With regulations changing in China causing concern, investors want clear visibility, and India over time has tried to improve their regulatory frameworks that provide opportunities for capital to come in and play,” he explains, “This will first be on the public market side and will move into the private sector as well.”

More capital in the Indian market

For the startup ecosystem, the current flurry of IPOs has a strong element of cascading effect as the early investors get good money upon exit, which can be redeployed in the next round of promising startups.

And, as Khanna points out, the increased IPOs will also help to create a positive feedback loop. “We have seen value creation happen for founders. It will also create that for employees, who may go and spawn newer companies, and have more broad-based value creation,” says Khanna.

He adds that IPO success stories will only aid the loop for risk appetite as people will see that those risks have actually paid off.

“This will encourage more capital to flow because last year, $10 billion was pumped into the ecosystem in the whole year, and this year, it already is over $26 billion, ” says Khanna, “There will be windows when things will slow down. It is natural, but it will still be an upward growth swing.”

Additionally, the perks of staying invested is a great way to make money in India, and one has to take a long-term view. “India tends to underwhelm in the short term, and hopefully deliver fantastic returns in the long term. Staying invested and focused on quality is going to be important,” says Khanna.

On the direction of the market, he says that currently, there is both a secular and a cyclical trend. On the secular side, India today is clearly the final frontier for many investors. “The size, scale, and opportunity India presents over the next decade or two is massive,” he adds.

On the cyclical side, multiple factors are driving allocations of capital towards India. “There is a critical mass of technology companies that are able to create liquidity events through IPO,” says Khanna.

Capital has also been directed in large amounts towards startups in general. As fixed income returns continue to be fairly low, people are looking to manufacture yields that go beyond the one to three percent that fixed income is providing.

Khanna explains, “People are moving money into equity and other strategies; many funds have forward-looking obligations. And if they don’t recalibrate around other asset classes, they can’t make those commitments. Also, interest rates are low, liquidity is high.”

A growing class of new investors

A Paytm Money study revealed that 27 percent of those who applied for Zomato shares on its platform on Day 1 of the IPO were under the age of 25 while 60 percent were under 30 years of age.

Another interesting factor is that from a little over 2.34 crore in April 2015, the total number of dematerialised (demat) accounts have grown over 2.76 times in 76 months to nearly 6.49 crore at the end of July 2021.

On an annual basis, the total number of demat accounts in the country have increased by over 1.95 crore, or 43.2 percent, compared to 4.53 crore in August last year.

Given the phenomenal rise in the digitisation of financial services, and the sky-rocketed number of demat accounts in the last one year, it would be a fair assumption that digitisation and proliferation of fintechs have brought in a lot of first-time investors in the market.

The data from Paytm Money gives way stronger reasons to join the dots in this direction. And, finally, given that the markets have posted a strong recovery and as the S&P BSE Sensex has continued touching newer life-highs in 2021, the bullish sentiments are possibly a strong reason for issuers and investors alike.

This means that while five months of the current year are still pending, over 118 percent of the value raised in 2007 and 2008 has already been raised through a number of issues which are little over a fourth, 27 percent to be precise.

Also, while the global financial meltdown followed the IPO boom in 2008, this time the boom has followed a worse global crisis in the form of the COVID-19 pandemic.

Bullish sentiments seem to be drawing support from the fact that the first wave brought maximum damage to the secondary market, and the second wave though deadlier, in a relative sense it had almost no negative impact on the equity markets.

While a third wave has not been ruled out, the fear of the same is already priced in by the markets, and hence the no look-back on the benchmark indices as well as the companies announcing plans to hit the market with IPOs.

In closing, Khanna says the rising tide of investing in startups and in markets will lift all boats. “But not all companies are made equally great. Certainly, investors will have to exercise some discipline and judgment on where they want to place their bets right. I still think people need to be very focused on quality of leadership, and long-term secular growth.”

Following Zomato, the startup ecosystem would soon have a diverse set of case studies in the form of newer aspirants who are in the queue to get listed. The boom is for real, and it will ensure that startups and their investor backers will shine brighter in the coming days.

The listing day performance of CarTrade, which saw a 20.29 times oversubscription for its IPO, invites caution. On August 20, when CarTrade got listed, its closed the listing day Rs 1,500.10 a share on the Bombay Stock Exchange (BSE), posting a decline of Rs 117.90 a share, or 7.29 percent below its issue price.

On September 3, it closed at Rs 1,463.35 a share — over 9.43 percent lower its issue price. Clearly, for a player which has a long list of competitors, the market seems to see no moat, which is evident from the fact that CarTrade’s post-listing high price of Rs 1,610 a share on BSE — is Rs 8, or 0.49 percent, below is listing price.

Equity markets may be senile at times, but they are not insane for sure.