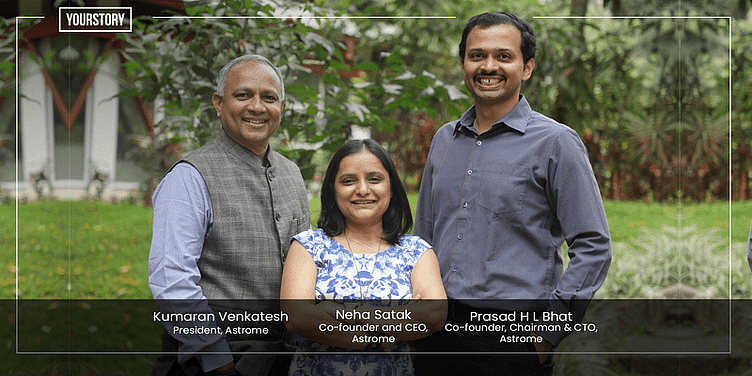 Deeptech startup Astrome has raised $3.4 million in a bridge round. The funding will be deployed for expanding into the US market, strengthening global operator trials, and further commercialisation of its core technology through new products.

Deeptech startup ﻿Astrome﻿, with offices in Bengaluru and California, has raised $3.4 million in a bridge round led by IAN Fund; Urania Ventures (Germany); and Lakshmi Narayanan, Founder, Cognizant.

According to the official statement, other investors including Impact Collective (South Korea), ArtPark (India), and a consortium of US-based angel investors also participated in the round.

Other investors who joined the round include Impact Collective (South Korea), ArtPark (India), and a consortium of US-based angel investors. Prior to this, the startup had raised funds from a clutch of angel investors and the Indian Institute of Science, Bangalore.

The fresh proceeds will be deployed for expanding into the US market, strengthening global operator trials, and further commercialisation of its core technology through new products.

Founded in 2015 by Dr Neha Satak and Dr Prasad H L Bhat, Astrome provides Gigabit speed telecommunication solutions to telecom service providers, enterprises, and defence. It is also aimed at accelerating the deployment of 5G in suburban areas and broadband in rural areas through its patented telecom radios and satellite communication products.

The startup said it is aimed at establishing E-band as a viable alternative to fiber. Its multi-beam E-band product named GigaMesh, is a radio that can wirelessly connect cell towers or base stations to the core network. Currently, the product is working in three verticals including rural last-mile, urban telecom, and defence communications.

“Astrome is the only company that has a product which features multiple-point-to-point communication in E-Band, resulting in a much lower CapEx than the competition. Our first two products, GigaMesh and GigaSat have a combined addressable market of $34 billion, globally. This market is expanding quickly due to the rising need for mobile and broadband communication infrastructure as a result of the change in lifestyle in the last two years. Moreover, Astrome’s technology is driven by software to make it easy to deploy, maintain and repair remotely," Neha said in a statement.

"We are grateful to have received this support from marquee investors in our journey to establish GigaMesh as a leading solution for 5G backhaul, mid-haul, and front-haul, globally,” she added.

The startup had signed a contract with Indian Defence forces to deploy GigaMesh to cater to the strategic communication requirements of the country. This year, it also signed its first overseas deal with a South-East Asian telecom operator. It also claimed to be the first startup in the world to be selected by EvoNexus, a 5G accelerator programme sponsored by Qualcomm and Verizon in San Diego, California.

Astrome is now developing GigaMesh-Next, an E-band radio capable of delivering 50 Gbps per device. ideal for the next generation deployment of 5G networks.

Apart from this, the startup is also looking to launch its Flat Panel Satellite (FPS) terminal, GigaSat, in the coming years. It will help serve the need for low-cost user terminals required by LEO satellite internet providers.

Rajnish Kapur, Managing Partner of IAN Fund, said, the demand for bandwidth is registering a huge growth led by increased pace of digital transformation and the new normal of remote working. He explained that most of this demand and need for increased throughput is from mobile devices. However, the existing front-haul infrastructure like 4G is not being able to deliver.

“The 5G rollout will in turn fuel the need for robust backhaul as the number of cell sites go up by nearly 5 times. While the current default choice for the backhaul remains fiber optics, it is also quite difficult and time-consuming to lay in a typical dense urban setting. This is where Astrome’s proprietary mm-Wave technology steps in to provide fiber-like-wireless backhaul connectivity, for both 5G and terrestrial broadband, which is light on both CapEx and OpEx for the telecom operators. Astrome is also using the same technology platform to deliver satellite-based internet access solutions. Through its unique products, the company is pioneering the future of millimeter-wave wireless communication, be it on earth or from space,” he said.