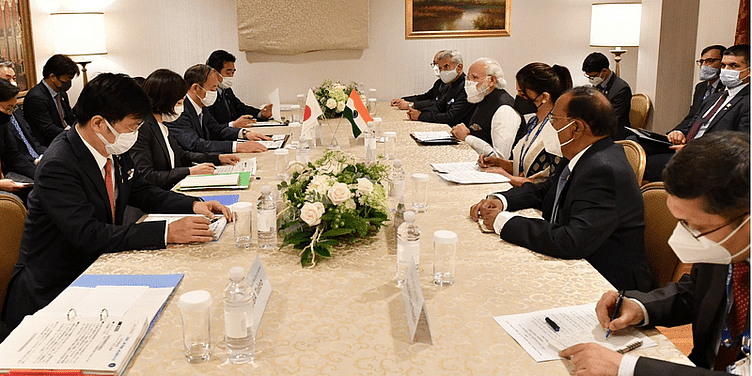 PM Modi, who arrived here on Wednesday on an official visit to the US during which he will hold the first face-to-face meeting with President Joe Biden and his deputy Kamala Harris, held separate meetings with CEOs of Qualcomm, Adobe, First Solar, General Atomics and Blackstone.

Prime Minister Narendra Modi on Thursday held extensive discussions with top American CEOs and business leaders on investment in India, and explored ways to forge closer Indo-US economic linkages that would benefit the people of the two countries.

Modi, who arrived here on Wednesday on an official visit to the US during which he will hold the first face-to-face meeting with President Joe Biden and his deputy Kamala Harris, held separate meetings with CEOs of Qualcomm, Adobe, First Solar, General Atomics and Blackstone.

"Through the morning, had extensive discussions with top CEOs and business leaders on investment in India. They were appreciative of India's reform trajectory. Closer economic linkages between India and USA benefit the people of our nations," Modi said after one-on-one meetings with CEOs.

"Talking technology...," the Prime Minister's Office said in a Twitter post after Modi's meeting with Qualcomm CEO Cristiano Amon and First Solar CEO Mark Widmar. They had a productive interaction, it said.

"PM Modi highlighted the vast opportunities India offers. Amon expressed keenness to work with India in areas such as 5G and other Digital India efforts," it added.

In India, Qualcomm Ventures has invested in companies that address key domestic issues from dairy, transportation to defence.

Modi described the meeting as "fruitful" and said they talked about leveraging technology for greater public good and tech opportunities in India.

"He was interested in India's strides in 5G and our efforts such as PM-WANI to boost connectivity," Modi said.

"Toward making India a global innovation hub!" Ministry of External Affairs (MEA) Spokesperson Arindam Bagchi tweeted. Modi had a conversation with Amon on investment opportunities in hi-tech sectors in India.

They discussed investment opportunities offered in India's telecommunications and electronics sector. This included the recently launched Production Linked Incentive Scheme (PLI) for Electronics System Design and Manufacturing (ESDM) as well as developments in the semiconductor supply chain in India, the MEA said in a release.

"Strategies for building the local innovation ecosystem in India were also discussed," it added.

During his meeting with Widmar, Prime Minister Modi discussed India's renewable energy landscape and welcomed the leading US-based manufacturer of solar panels to invest in the country.

"The subject of solar energy is very close to my heart, because it concerns the future of our planet. Met the CEO of @FirstSolar, Mr. Mark Widmar and discussed why India is the right destination to invest in solar energy. Also talked about our green hydrogen mission," Modi tweeted.

First Solar has successfully commissioned 150 MW of Utility-Scale Solar Power to the Grid in India and has installed 1.8 GW of solar capacity in the country. Early this year, it announced its intention to set up a new 3.3 GW Facility in India. As such First Solar is contributing to India's plans to ramp up solar power generation to 100 GW by 2022.

During the meeting, the prime minister elaborated on India's efforts to harness solar energy, including the 'One world, One sun and One grid' initiative and investment opportunities in the sector, his office said in a tweet.

"They talked about India's renewable energy landscape, particularly solar energy potential, and our target of 450 GW electricity generation from renewable sources by 2030, the ministry said.

The discussions between prime minister Modi and Narayen also focused on India's flagship programme Digital India, and the use of emerging technologies in sectors like health, education and R&D.

Modi and Narayen both emphasised on creating few centres of excellence of Artificial Intelligence (AI) in India.

"Shantanu Narayen of @Adobe is a great friend of India. I sat down with him to discuss interesting ideas relating to edtech, supporting Indian startups and boosting innovation. Shantanu expressed keenness to take the joys of video and animation to every child in India," Modi tweeted after the meeting.

After North America, India represents Adobe's biggest operations with over 6,000 employees across its campuses in Noida and Bengaluru. India also serves as an innovation hub for Adobe, with the Indian R&D team contributing to development of every Adobe product. Moreover, initiatives such as Adobe's Grassroots Innovation Challenge and Women-in-Technology Scholarship are fueling the ongoing digital revolution in India.

"PM Modi believes that technology is the way to help things move forward," Narayen said after his meeting with the prime minister.

He appreciated the efforts of India towards fighting COVID -19, particularly in the rapid vaccination, and expressed desire to bring video, animation to every child in India.

The Prime Minister and Lall discussed India's strides in drone technology, including the path-breaking reforms and PLI scheme, the PMO said in a tweet.

"They spoke about strengthening the defence technology sector in India. Lall appreciated the recent policy changes to accelerate defence and emerging technology manufacturing and augment capacity building in India, the MEA said.

"Discussing a subject of the future, which has captured the imagination of the present. Mr. Vivek Lall of @GeneralAtomics Global Corporation interacted with PM @narendramodi. They discussed India's strides in drone technology, including the path-breaking reforms and PLI (Production-Linked Incentive) scheme, the PMO said on Twitter.

General Atomics, which opened its first office in India in 2018, is making significant contributions to deepen India-US defence and security cooperation. It is working with both governments in an effort to provide India with the latest systems and technologies supporting national defence.

General Atomics has also partnered with Indian companies to develop solutions for Indian defence as well as capacity building.

"Giving greater momentum to investments in India. Mr. Stephen Schwarzman, the CEO of @blackstone met PM @narendramodi. Various investment opportunities in India, including those arising due to the National Infrastructure Pipeline and National Monetisation Pipeline were discussed, the PMO tweeted.

Blackstone, which started its operations in India in 2006 and has so far invested around $15 billion in various sectors including private equity, real estate, education, fashion, packaging and housing finance.

Blackstone Real Estate Fund is said to be the largest owner of commercial real estate in India. The company played a key role in launching India's first real estate investment trust (REIT) along with its partner Embassy Group in 2019 and has since then launched two REITs in the country.

20 artists, one cause – how the ‘Southern Trends’ art exhibition celebrates creativity and raises funds for education