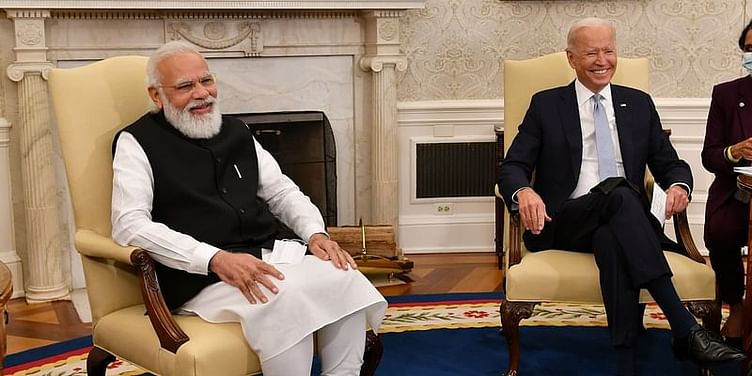 In what was PM Narendra Modi's first meeting with US President Joe Biden, after he got elected as America's 46th President earlier this year, several issues surrounding the two countries were raised and discussed.

A fact sheet later released by The White House highlighted how the US-funded startup Nexus and innovation hub "showcases the best of American and Indian entrepreneurial innovation and technology commercialisation."

According to the statement, Nexus serves as a central hub for entrepreneurs, innovators, faculty, industry players, and funding organisations interested in promoting Indian startups and the local entrepreneurial ecosystem.

"Since 2016, Nexus’s 138 graduates have raised over $19 million in outside funding, and closed over 70 deals with many prominent Indian and US companies," the statement read.

They also discussed the upcoming launch of the US-India Alliance for Women’s Economic Empowerment—a public-private partnership between the Department of State, USAID, the US-India Strategic Partnership Forum, and George Washington University. The initiative will help catalyse collaboration to advance women’s economic resilience and empowerment in India.

The top leaders of the world's oldest and largest democracies also discussed their commitment towards values of freedom, pluralism, openness, and respect for human rights.

Commenting on the meeting, PM Modi later tweeted, "Had an outstanding meeting with POTUS, Joe Biden. His leadership on critical global issues is commendable. We discussed how India and USA will further scale-up cooperation in different spheres and work together to overcome key challenges like COVID-19 and climate change."

Here are glimpses from the Quad leaders meeting. The discussions with @POTUS @JoeBiden, PM @ScottMorrisonMP and PM @sugawitter were extensive and productive. pic.twitter.com/cNedF0XRz6

The Prime Minister, who is visiting New York for the United Nations General Assembly, shared glimpses from the Quad leaders meeting held with the leaders of other countries besides the US, including Yoshihide Suga (Prime Minister of Japan) and Scott Morrison (Prime Minister of Australia).