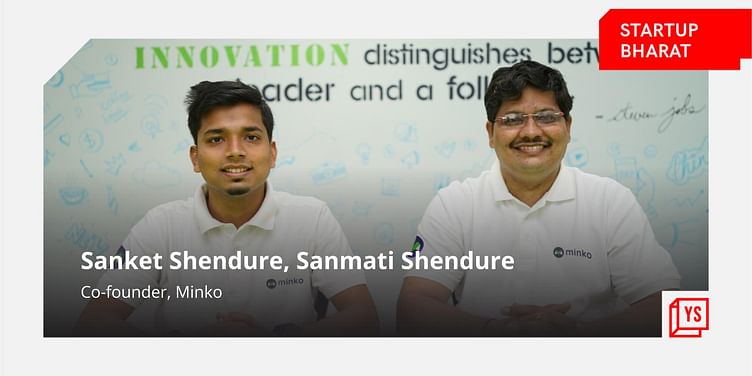 Founded by Sanket and Sanmati Shendure, Goa-based startup Minko has over 10,000 retailers and aim to expedite its growth in the offline retail space and lessen the credit gap.

India has approximately 6.3 crore MSMEs and over 12 million kirana stores. But, despite the gargantuan numbers, there is a vacuum of organised credit available to the sector, leading to a credit gap of $250 billion.

Hailing from a family engaged in the FMCG distribution business for over three decades cousins Sanket Shendure and Sanmati Shendure developed in-depth domain expertise along with a rich understanding of the challenges faced by Indian retailers.

The duo launched ﻿Minko﻿ in January 2021 to address this credit bottleneck through a full-stack Buy Now Pay Later (BNPL) led payment product for independent distributors in the Indian retail market.

“Currently, in the FMCG segment itself in India, 90 percent of the $100 billion worth of R2D (Retailer to Distributor) payments are executed in cash. Minko’s services will enable digital adoption among grassroot retailers and distributors through a unique credit-led payment product,” Sanket tells YourStory.

The founders started their journey with a domestic money remittance business way back in July 2017, which was facilitated by a network of retailers and kiranas who acted as agents.

These agents helped users, typically migrant labourers working away from home, send money to their loved ones. They would give the cash to these retail and kirana store owners, who then wired the money on their behalf.

The entire transaction process was being powered by ICICI Bank and Paytm Payments Bank in the background.

By 2020, Minko, then known as Minkspay, had built a distribution network of 10,000 retailers, who were processing close to half a million transactions per month.

“We have processed more than $100 million transaction value from our system altogether over these three years. But the only thing we realise is that we are just acting as a distribution channel for the banks to get their product to smaller retailers and make them agents on their network,” says Sanket.

The COVID-19 lockdown changed things as the founders realised their business was just “replaceable at any given point of time”.

“That is when we decided to build a business which adds significant value to retailers and we built it from scratch. We came across the elephant in the room — the credit challenge faced by smaller retailers after the first lockdown,” recalls Sanket.

Facing cash issues themselves, the pandemic led many distributors to reduce their credit periods to retailers to less than a week. On the other hand, retailers wanted at least two to three weeks' time.

That is where the co-founders realised that there is a big opportunity to create a BNPL stack for these distributors as well as retailers. Further, there are lenders or NBFCs that also want to bridge this credit gap.

The duo pivoted completely to a credit model, and rebranded to ﻿Minko﻿ in January 2021, ​​to primarily focus on building a formalised BNPL.

The Minko platform allows FMCG and pharma companies and their distributors to save on cash collections costs along with lowering follow-up costs for payments, which are now digital and settled automatically online.

Minko offers credit limits between Rs 5,000 and Rs 2 lakh for a period of 5-30 days depending on the retailer's choice.

Sanket says, “NBFCs cannot source these borrowers and retailers on their platform just for a loan of Rs 10,000 for 40 days because the operational costs would be massive. We realised we can only solve this by becoming an aggregator or solving this problem end-to-end for all three stakeholders — retailers, distributors, and NBFCs. This is where we came in to give the kind of experience that Flipkart and Amazon have given us with the kind of buy now pay later experiences since last two to three years.”

The startup launched its flagship product Minko Credits and built a mobile app.

First, a distributor comes onboard the platform and asks its retailers to use Minko’s mobile app. And then, NBFC or lenders facilitate the credit line to the retailers.

At present, more than four NBFCs are working with the startup.

With a 30-member team handling a network of 100+ distributors with 10,000+ retailers, Sanket (CEO) handles product, tech, and fundraising while Sanmati (Co-founder) leads sales and business development.

Through Minko Gold, every time a retailer makes a payment to the distributor, Minko helps them get a cash discount or cashback in the form of gold, which will help these retailers to generate a kind of SIP of digital gold.

“Eventually, they can withdraw one gram or five gram or 10 grams of gold as and when that kind of accumulation of gold happens and we have partnered with SafeGold in the background,” says Sanket.

Minko Invoices helps retailers get a digital copy of the invoice once the retailer makes the payment either on credits or otherwise.

“We give you a Minko stack, to distributors, which they need to download and sign up and connect with their ERP system. And as soon as they go live as a distributor in the platform, not just the retailer who takes on credit but remaining retailers who actually get the physical copy of invoices can now start receiving a digital copy of invoices via Minko,” states Sanket.

Minko generates revenue by facilitating the BNPL transactions on its platform from different stakeholders right now.

“For Minko Invoices, we collect transaction fees on a per turn transaction, from the distributors. In the case of Minko Credit, NBFCs share a certain set of interest rates with us as the platform fee and that is how we generate revenue right now,” adds the co-founder.

Without disclosing exact figures, Sanket adds, “We have processed more than 4,000 credit transactions in just last eight months and we have disbursed more than a $2 million worth of credit (over Rs 15 crore) from our platform to for more than 110 suppliers and distributors in four states of India — Goa, Bihar, Maharashtra, Karnataka.”

Funding and way ahead

The retail fintech platform had raised $1.5 million in a seed funding round led by LC Nueva AIF, an India domiciled Category II AIF Fund, where LC Nueva Investment Partners LLP is the Investment Manager with participation from, LetsVenture Founder and CEO Shanti Mohan, and Kunal Shah, Founder of CRED.

Over the last six months, Minko has onboarded 10,000+ retailers and distributors of reputed brands, including Unilever, Parle Agro, Coca-Cola, Haldirams, Britannia, etc. Other players operating in a similar market include Rupifi and ePayLater.

From its current presence in Goa, Maharashtra, Karnataka, and Bihar, the company aims to expand to other states in India in the coming year and expects to onboard over one lakh retailers and distributors.