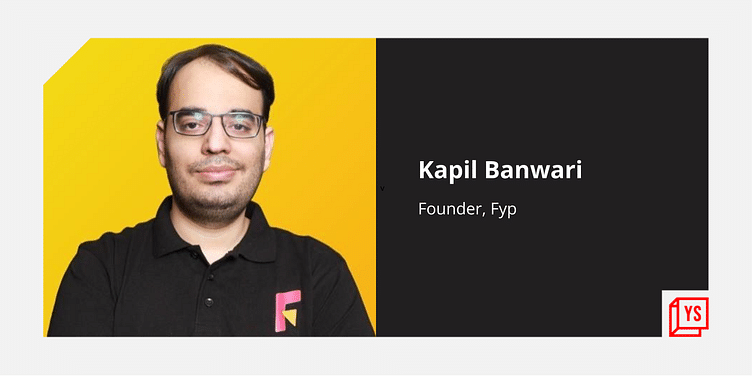 Gurugram-based startup Fyp aims to educate kids in India in financial matters using new-age fintech products. It has raised $2 million in seed funding, and is looking to close another round soon.

As a cost and management accountant, certified by the Institute of Cost Accountants of India (earlier known as ICWAI), finance comes easy to Kapil Banwari. Also, hailing from a family of businesspeople meant he was, in some ways, he believes, driven to starting up on his own.

But he wanted to experience and learn from corporates, so he joined ITC where he spent seven years in various financial roles.

It was at ITC when his colleagues from across departments and functions used to seek him out for personal financial advice, tax filing, and investment management that he realised how big the gap in financial literacy was —  and he decided to do something about it.

Teaching children is easier than teaching adults, Kapil realised, and focussing his efforts on creating a platform that could help teach children finance seemed like the way to go. In 2021, he founded ﻿Fyp﻿,  a fintech startup geared towards children that helps them learn the ins and outs of the financial world at an early age.

Fintech for children in India is a crowded space, especially with the likes of ﻿Junio﻿, ﻿FamPay﻿, and ﻿Walrus﻿ — and Fyp operates on a similar concept and has the same objective.

[App Friday] NiyoX has the right idea of what millennials want from banks today, but its execution is glitchy and needs fixing

After all, the global neobank market is expected to grow at a compounded annual growth rate (CAGR) of around 46.5 percent between 2019 and 2026 to $394.6 billion, from $18.6 billion, according to Zion Market Research. And, with more than half the population of India under the age of 18, that translates into a wide addressable market for these new-age startups.

But Fyp’s USP lies in its financial literacy offering, where it educates children about finance concepts via gamification and bite-sized video content.

To that effect, Fyp, earlier this year, acquired edtech startup ﻿Edunify﻿, which will help it expand its user base via tie-ups with schools across the country.

“Fyp focusses on financial literacy and finance concepts, and is not just a tool to make payments,” Kapil tells YourStory.

“We are on a mission to bank with pre-teens and teenagers in every nook and corner of the country and offer them a convenient way of banking.”

Business model and traction so far

Fyp works like any other neobank — on top of a banking service layer. The Gurugram-based startup has partnered with YES Bank for its wallet services, and Visa for the online and physical card it issues its users.

It makes most of its revenue from an interchange fee, which banks levy on merchants for processing payments. The physical card — linked to the Fyp account — is issued at a nominal cost to those interested in one, although for online transactions, the virtual card suffices, Kapil says.

Associating with brands that cater to children and providing them a platform to market themselves on Fyp is another way the startup is looking at generating revenue.

The fintech company launched its MVP in September 2021, and its main product in December. Since then, it has seen over eight lakh downloads across Android and iOS, with daily active users between 40,000 to 45,000. It has processed more than 2.5 lakh transactions to date.

Fyp’s target audience is between 11 and 21 years of age, like most teen-focussed neobanks. Nearly 70 percent to 75 percent of its user acquisition has happened organically, the startup said.

Earlier this year, the startup raised a seed round of $2 million, and is currently in the midst of raising its next investment round.