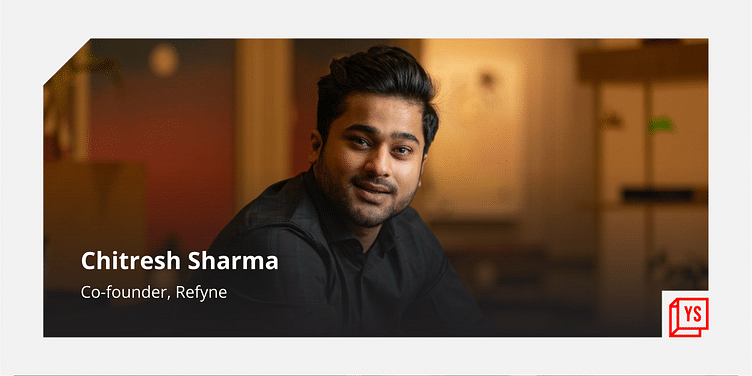 Founded in 2020 by Chitresh Sharma and Apoorv Kumar, the startup works with employers to provide employees access to earned wages before their payday.

Of the many changes we’ve noticed in the last year, earned-wage access (EWA) is the one through which employers are addressing the financial well-being of their employees.

EWA is a financial product through which employees can access a portion of their salary any time before their payday. The concept is popular in countries such as the US, Brazil, the UK, and Singapore.

Bengaluru-headquartered ﻿﻿Refyne﻿, which claims to be India's first EWA platform, is helping companies integrate EWA into their payroll and human resource management system.

Founded in 2020 by Chitresh Sharma and Apoorv Kumar, the startup works on a Business-to-Business-to-Consumer model (B2B2C).

“Most companies in India pay their employees at the end of the month. But the reality is that expenses happen every day,” says Chitresh, CEO of Refyne. Majority of the people are left with no savings before their next payday, he adds.

The individual has to live with no money for a few days and has no access to money in case of an emergency.

The natural response is to ask for loans from families or friends, or reach out to fintech startups that charge exorbitant interest rates.

“Our fight is against these loan sharks with exploitative interest rates,” he says.

Often, these lenders do not disclose the multiple overheads in the form of processing fee, early payment fee, late payment fee, etc., or they allocate more money than necessary to the customers.

This adds unnecessary burden to the liquidity crunch, putting the employee further away from financial well-being and stability.

“Majority of the people can resolve their mid-month crisis if they have early access to their salary,” Chitresh adds.

This is what the startup aims to change -- approaching it from the employer’s point of view.

Chitresh’s previous experience of starting-up with ventures such as IT solutions company Cloud9, and a cashback application Swipii in the UK, and Apoorv’s technology experience at Goldman Sachs and lending app Shubh loans, has helped them build a team of more than 150 employees today.

The product and business model

Employees can use Refyne’s platform and the app through an embedded solution to access their earned salary at any time of the month.

The product works digitally and Refyne does not charge any interest on this early access to wages. Instead, it charges a fee for every transaction that happens through the app.

“There is no complex financial structure to it. It is a simple transaction fee,” Chitresh says.

Whatever money is used on-demand by the employee during the month is automatically deducted from the final salary at the end of the month.

On Refyne’s end, the process involves a partnership with employers and non-banking financial companies (NBFCs).

Refyne has partnered with more than 200 organisations, who can plug and play its software, integrate it with their enterprise resource planning or human resources management softwares at zero cost. This helps it to verify the employees of an organisation.

The startup covers more than one million employees across different industries with companies like ﻿Rebel Foods﻿, ﻿Practo﻿, ﻿Wow! Momo﻿, Cafe Coffee Day, ﻿Cars24﻿, Tenon, among others as its partners. The startup also offers its services across 12 Indian languages.

Further, it has partnered with NBFCs, who transfer the salary to the individual’s salary account. To ensure it is the right user, Refyne does a penny drop check, a common way to verify the authenticity of a user's bank account.

Employees can download Refyne’s app, sign up, and complete onboarding by filling out the details. They can activate their accounts to start retrieving earned salary on demand and in real-time based on what they select.

The market and funding

In less than a year, Refyne claims its transacting user base has grown 68X and the platform recorded 165X increase in the number of transactions over the period.

While the concept is relatively new in India, with UK-based neobank Revolut’s entry in India, the startup is going to face tougher competition.

In a previous interaction with YourStory, Chitresh said the company has applied for an NBFC licence, and it is currently working with multiple NBFC partners to offer its services.

The company plans to scale its user base to three million in the next twelve months.