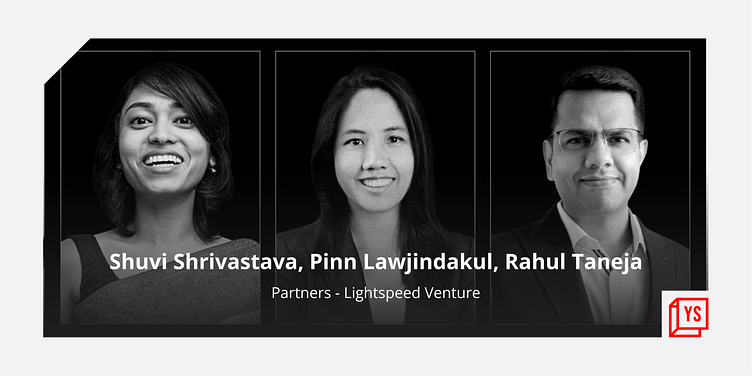 Venture capital firm Lightspeed has announced the elevation three of its executives - Shuvi Shrivastava, Pinn Lawjindakul and Rahul Taneja as Partners at the firm.

In a post on LinkedIn, Lightspeed India said the three new partners will be on its early stage investment advisory team.

Shuvi first joined the firm as an Associate in 2015. According to the VC firm, she played an instrumental role in identifying and accessing multiple opportunities including ﻿Darwinbox﻿, Uni, ﻿Pixxel﻿, ﻿Rattle﻿, ﻿Bhanzu﻿ and xFlow with primary focus on consumer tech and fintech. Before joining the firm, she was a startup founder.

Pinn has been an early member of the Lightspeed team in Southeast Asia since 2020, and has played a central role in establishing its office in Singapore. According to Lightspeed, as an experienced investor, Pinn has cultivated strong partnerships in the region, and helped quarterback investments in Endowus, Astro and Geniebook among others.

It gives us tremendous joy to celebrate the growth of our colleagues @shuvi, @PinnLawjindakul, and @rahultaneja, who are stepping into the roles of Partners on our early-stage investment advisory team. https://t.co/1SQzcGLgWG pic.twitter.com/Vsw2leFLiR

Rahul joined Lightspeed in 2020 as Chief Business Officer with responsibility for building the platform's team across functions like marketing, corporate development and portfolio oversight, while also actively supporting Lightspeed portfolio companies such as Udaan, Magicpin, Hubilo and Apna among others. Over the last 20 years of his career, Rahul gained significant leadership and operating experience in senior roles across consumer goods and consumer internet industries including P&G, Philips, Snapdeal and Jabong.

The post noted, “At Lightspeed, we deeply believe that venture is a ‘team sport’ and that our culture, values and sense of purpose enable cohesion and collaboration in an insanely powerful way.”

The Indian VC industry, which was generally viewed as a male dominated industry, is now increasingly moving towards a more diversified structure with the induction of more women in leadership roles. There is also the emergence of specific funds which invest only in startups led by women.