Zetwerk's Amrit Acharya on the importance of founder-market-fit, and when to listen to customers 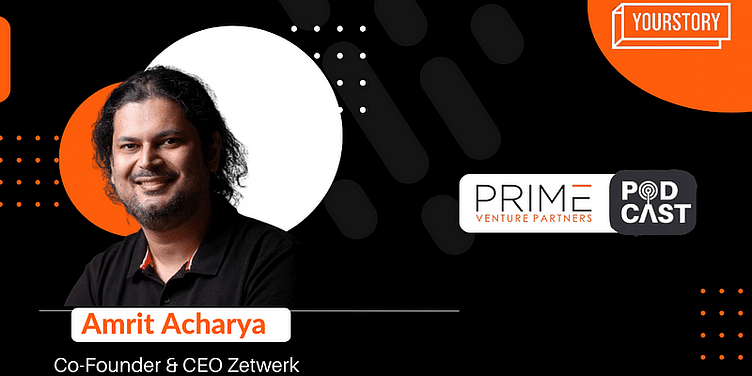 Zetwerk co-founder Amrit Acharya appeared on the recent episode of Prime Venture Podcast to speak about how he is working towards reimagining and digitising manufacturing in India.

Indian manufacturers have always faced the challenge of not being able to reach their target market due to a number of constraints. Many vendors supply one large-scale company, such as Bharat Heavy Electricals Limited (BHEL) or TATA, because they don’t know how to connect with other customers.

Some lack the capital or logistics, while others have trust issues and are reluctant to engage with consumers or suppliers outside their geographical area.

To address these challenges, Amrit Acharya, CEO and Co-founder of ﻿Zetwerk﻿, spoke to Amit Somani, Managing Partner, Prime Venture Partners, on how he is working towards reimagining and digitising manufacturing in India.

Amrit has a long history with the manufacturing industry. In college, he bagged an internship with Bosch for building a running vehicle from scrap. He landed his first job at ITC to build a new factory for them, where he fell in love with manufacturing. After two years at ITC, he went to Haas School of Business in Berkeley, California, to complete his MBA.

After his graduation, he landed a job at McKinsey, but quickly realised that the immigration system in the USA wouldn’t allow him to achieve his goals. Amrit’s decision to come back to India was a leap of faith, which was clubbed with his marriage and his decision to start a company in India.

After returning to India, Amrit noticed that most companies in India were still working with rudimentary tools like Microsoft Excel and Google Sheets. He realised there was a significant market for customised software that could solve the problems for enterprises, especially with regard to supplier and vendor management.

It’s not like the path was completely devoid of roadblocks. Businesses often told them that the decision to implement a new SaaS-based approach did not lie with them, but with CIOs in the US or Switzerland. But Amrit understood that businesses needed to see a ‘transaction-first’ approach before a ‘change management’ approach. This insight urged him to pivot the program even before he received the seed money from his bank and got the support of his investors when he shared his new plans.

Amrit built Zetwerk with a strong infrastructure backbone so that the company could take care of logistics, working capital, and procurement requirements for Indian manufacturers of various scales. Currently, 25% of Zetwerk’s revenue comes from foreign countries. Even though 90% of its suppliers are from India, it also has suppliers from Vietnam, Bangladesh, and the Middle East to manage contingencies like COVID. Amrit says that businesses can no longer rely on one destination for all of their procurements.

Usually, global organisations look for suppliers from a single country. India is one of the few countries that can match these requirements due to its size, provided there is someone to bring the manufacturers under an umbrella and present them to these organisations. Moreover, there are new regulatory supports in India, like the new scheme called PLI that incentivises production for every unit manufactured. Amrit believes all of these are steps in the right direction to bring India to the forefront of large-scale supplier countries, provided the correct steps are taken.

According to Amrit, there are a few crucial steps to building a successful company. First and foremost, it is necessary to have a transparent working culture and environment that is beneficial for the management as well as the employees. He believes it is necessary to avoid going forward in a pre-defined manner while building a company, as it hinders the process of imbibing the right culture. He ensures that Zetwerk operates in a decentralised manner that prioritises speed above everything else. Amrit says that entrepreneurs are bound to make mistakes while building a company, but it is crucial to learn from those mistakes and ensure that those mistakes are not repeated.

To know more listen to the podcast here

02:00 - Falling in love with manufacturing