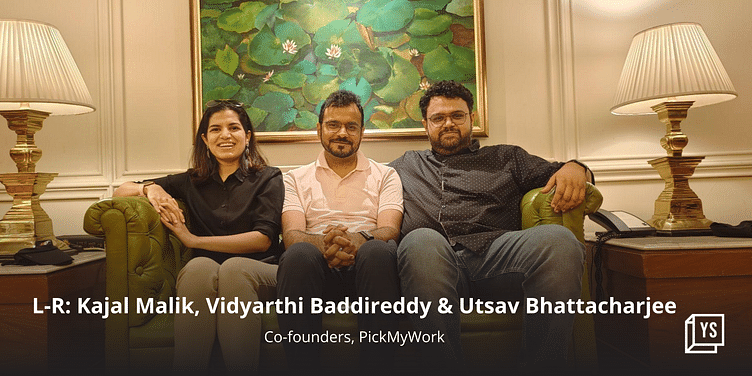 Founded in 2019, PickMyWork is a gig platform that sources and trains agents to help digital companies acquire clients through a pay-per-task model at a low customer acquisition cost.

“The two channels available to them do not function properly. Online channels are expensive and do not result in transactional users. Managing in-house feet-on-the-street sales teams to sell the product to end users is a major hassle. It is costlier, takes time to build, and is definitely not built for hyperscaling,” Vidyarthi says.

Running Reculta also revealed that the aspirations of young graduates from Tier II and Tier III colleges were not being met adequately by the limited employment opportunities. This translated into an opportunity to present alternate and additional earning opportunities for ambitious, underemployed youth across India.

“It was around this time that the fintech and consumer internet revolution, powered by the trifecta of inexpensive smartphones, cheaper internet, and UPI/wallets, was spreading beyond metros. This translated into a massive demand from internet companies to scale up in Tier II, Tier III, and Tier IV locations, faster than ever before. This needed newer models of sales and distribution; the kind of model that PickMyWork was ready with,” says Vidyarthi, Co-founder and CEO.

Founded in 2019, ﻿PickMyWork﻿ operates a network of gig workers to help digital companies distribute and sell their products at a very low customer acquisition cost (CAC).

The startup uses technology to source, train, and manage agents, after which it presents tasks from internet companies as gig earning opportunities to underemployed youth.

The gig employment startup claims to have had a “phenomenal” start, signing its first client, ﻿OkCredit﻿, after its mobile application was launched on Play Store in January 2020. It has worked with 22 clients to date, assisting them in acquiring 400,000 end customers, with work completed by one lakh registered agents.

Earlier, it worked on experimental projects for Swiggy and on generating leads and hiring for Dunzo and Whitehat Jr via the PickMyWork app. The startup also helped 1mg with new user acquisition and orders from first-time users.

Kajal, Co-founder and Chief Strategy Officer, and Vidyarthi met at FMS Delhi University, where they were both members of the institute’s campus placement team. They launched Reculta two years after they passed out from FMS.

Utsav, who holds an MBBS degree and an MBA from IIM Ahmedabad, met Vidyarthi through an online CAT preparation resource and joined Reculta as a co-founder in 2017.

Their roles at PickMyWork are well defined: Kajal takes care of business development and marketing, Vidyarthi handles product development and the technology team, and Utsav manages operations and business growth.

Indian youth are increasingly becoming accustomed to completing delivery gigs for hyperlocal apps such as Swiggy, Zomato, and Bigbasket, and earning commissions. The founders felt this preference for gig-based work could be harnessed for sales.

As a consumer tech startup, PickMyWork sources, trains, and manages youth who can work as agents for digital companies. These workers can download the PickMyWork mobile app and see the list of companies with products to sell (to individual users/shop owners) and the earnings they can make per sale.

“This allows consumer tech companies to focus on what they do best - creating technological solutions. PickMyWork, meanwhile, leverages its on-field gig partner network to create a blend of technology and human interaction to facilitate the customer/merchant acquisition process. Each completed sale is credited into the agent's wallet and the money is transferred to his/her bank account every week. Agents are charged zero commissions,” Vidyarthi says.

PickMyWork promises 3X earnings per hour of effort as compared to other delivery gigs.

“This model turns out to be 1/10th cheaper compared to online marketing or having in-house sales teams for internet companies,” says COO Utsav.

He adds that competitors like Futwork, SwarmSales, Sellcrowd, and Salesconx operate in the same market and target the same customer base in the same geographic area, but with varied approaches.

“We believe that competition is good for business as it helps us spot opportunities to innovate, promote the business, enhance products or services, and ultimately outshine the other,” Utsav says.

The founders bootstrapped the company with an initial investment of Rs 60 lakh.

PickMyWork has overcome many hurdles since inception to reach a significant milestone, Utsav says.

“Bootstrapped till the end of 2021, we crowdsourced funds during the pandemic specifically to serve the needs of the gig workers. We also became an alternate source of income for people who lost their jobs to COVID. Many people who subsequently found full-time jobs still continue to work with PickMyWork to earn extra income,” he says.

The startup was awarded a grant by the Emergent Ventures programme run from the Mercatus Center at George Mason University.

“We were successful in scaling PickMyWork to $500,000 ARR as of June 30, 2022, which was enough to keep the business running for another 18 months in a competitive environment,” he says.

Utsav says winning the trust of clients and hiring/retaining skilled professionals was difficult.

He adds that ensuring that the mandate from the client was strictly adhered to, a sharp focus on quality over quantity, and over-communicating while scaling up helped with clients.

“Earning the trust of agents was even more critical. We achieved this by delivering transparency and timely payments,” Utsav says.

“In the hyper-competitive tech world, speed to market is critical to success, which PickMyWork is poised to deliver through its extensive network of sales gig agents,” he adds.

According to Chiratae Ventures, India’s consumer technology industry will be worth $200-250 billion by 2025. A report by ASSOCHAM states that India’s gig sector is likely to grow to $455 billion at a CAGR of 17 percent by 2024 with the potential to grow approximately 2X the pre-pandemic estimates.

It has a footprint in 12 states, including Delhi-NCR, Punjab, Haryana, Uttar Pradesh, Bihar, Maharashtra, Karnataka, West Bengal, Andhra Pradesh, and Orissa. These states account for 90 percent of the brand’s revenue. The geographic spread of PickMyWork’s user base/clients is active in approximately 150 cities across India,

The startup has announced plans to go deeper in the BIMARU (Bihar, Madhya Pradesh, Rajasthan, and Uttar Pradesh) states and anticipates 60 percent traction from them by the end of this fiscal year.

The startup plans to grow its team to 100 members within the next two quarters. It recently announced that it is on its way to expanding its agent network 10X and signing up 5 lakh+ agents.

SOSV invested an undisclosed amount in PickMyWork in late 2021 to build India’s largest pay-per-sale distribution network. The company is currently closing its seed round with SOSV as the lead investor.

“As new-age startups come up in the fintech, D2C, and social commerce spaces, PickMyWork aspires to be the partner of choice as a distribution channel to acquire customers for all emerging startups. PickMyWork aims to have 10 million agents as part of its digital distribution network by the end of 2023 and to create the biggest plug-and-play network of its kind for hyperscaling of internet companies,” Utsav says.