Ecommerce as a sector will become irrelevant: ONDC chief 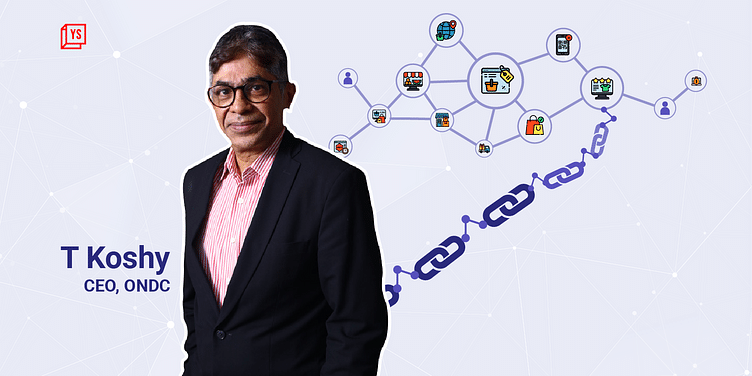 ONDC Chief Executive T Koshy throws down the gauntlet ahead of the unfurling of an ‘UPI moment for ecommerce’, as banks and fintech platforms, too, prepare to open digital storefronts linked to the open protocol.

The CEO of the Open Network for Digital Commerce scrolls down his ﻿Paytm﻿ app to a section tagged ‘ONDC’ to order a salad from a restaurant nearby. It’s too early, and the eatery isn’t open yet. But it’s a place T Koshy says he orders from every once in a while, particularly to demonstrate how ONDC works.

The network is a de facto online commerce inclusivity platform for small vendors, and, more importantly, India’s counter to the dominance of large, investor-fuelled online marketplaces and aggregators. (ONDC is also testing a mobility, or cab-booking feature, in Kochi.)

“The problem that ONDC is trying to solve is not just a developing-country problem,” Koshy says. “Today, (the dominance of ecommerce giants) is a problem everywhere... these guys have become so big that it’s uncontrollable.”

While the seller side on ONDC is crowded with a rush to onboard small merchants, the buyer side is sparse, with only ﻿Paytm Mall﻿ fully onboard and running pilots. IDFC First Bank and ﻿PhonePe﻿, too, will be launching ONDC-compatible shopping platforms shortly, their spokespersons confirmed.

And yet, ﻿Amazon﻿and ﻿Flipkart﻿, which command about two-thirds of India’s digital commerce market, remain elusive.

“In the future, anybody who has got anything to sell—products or services—will make their catalogues visible in this common network (ONDC), either by themselves or through a third-party aggregator or a technology service provider,” he says.

“So, everybody will have commerce; there (will be) no separate need to have an ecommerce company… Amazon will also exist, Flipkart will also exist, (but) they will all become part of this common pool.”

In its current format, the ecommerce sector will likely undergo significant changes for a majority of the participants, as ONDC democratises the space with more players coming in, adds Koshy.

In other words: “Ecommerce (as it is practised now) will become irrelevant.”

ONDC has been testing grocery and food delivery since April in select cities—categories that Koshy says are the toughest to crack.

“We took up the very difficult ones (to begin with)—grocery and food—because these can only be hyperlocal. And that’s a very painful one,” he says. “We wanted to see (how) a difficult thing could work.”

Once ONDC is opened to the public this month, Koshy would be able to search for a salad on any compatible buyer app. Paytm was the first to launch an ONDC platform for shoppers, followed by IDFC First Bank. PhonePe confirmed it will be launching a consumer-facing app as a part of the ONDC network shortly, and that it would first be piloted in Bengaluru.

Kotak Mahindra Bank, which acquired a 7.84% stake in ONDC in March, is also expected to launch its buyer app shortly, Koshy says. (Kotak didn’t immediately reply to queries on its ONDC plans.)

With ONDC designed to be an open protocol, a seller’s catalogue will be visible on any buyer application operating on the same protocol. Koshy draws parallels with the internet and with email networks that allow people on different platforms to communicate with each other.

“That is what ONDC is about: unbundled interoperability. We have created a language for talking to each other.”

Restaurants, grocers, and vendors of other goods are typically aggregated via entities such as ﻿GoFrugal﻿, ﻿eSamudaay﻿, and ﻿Snapdeal﻿ on seller-side apps. They will be visible to all buyers on platforms such as Paytm, so shoppers can decide whom to purchase from.

Such “democratisation”, though, doesn’t mean certain entities on ONDC cannot have a larger market share than others, Koshy emphasises. “It depends not on the scale of your captive users, but on the specialisation and innovation you have.”

So, a particular buyer app would be able to focus on, say, street food, curating from the menus of all the restaurants on the ONDC protocol. Another entity might want to specialise in a more niche category, say wedding products and gifts, and all relevant catalogues from a common pool of merchants will be available to its buyers.

When a buyer searches for a product or service, offers from multiple sellers across apps will be displayed on their ONDC-compatible app of preference. Once the buyer selects a particular product or service from a seller, the order will reach the chosen seller and will be fulfilled by service providers that are a part of the ONDC network.

As of the last week of August, about 250 merchants had been onboarded in about 60 cities.

As for deliveries, ONDC has ﻿Shiprocket﻿, ﻿Dunzo﻿, eKart , ﻿Ecom Express﻿, ﻿Loadshare﻿, and ﻿Grab﻿ as logistics partners.

The addition of inter-city logistics players and aggregators such as Shiprocket, Ecom Express, and eKart will take ONDC go live nationally once it comes out of the closed pilot.

Any entity joining ONDC has to sign a standard, non-negotiable network-wide agreement on all existing and evolving network policies. Failure to adhere to these policies would attract penalties and suspensions, says Koshy.

“Once we test an app for compliance to the protocol, we will put its name in a registry and only (entities) in the registry can talk to each other,” says Koshy.

A seller once barred, say, for selling fake goods, would not be able to list on any other ONDC platform.

ONDC is working to create an online dispute resolution mechanism in a few months, including empanelling third-party ODR (Online Dispute Resolution) platforms. “We will have a network-wide scoring of reputation.”

A vendor selling low-quality, spurious or damaged products will attract lower scores, visible to the buyer. Also, the number of issues, grievances, and disputes against each seller network will be posted periodically on the ONDC, putting the onus on seller-side apps to encourage genuine sellers and offer transparency to the buyer.

Koshy expects ONDC to have an exponential impact on digital commerce in India, particularly as more small merchants gain greater access to credit as they go online and become part of the organised sector.

The gross merchandise value of ecommerce trade, or the total value of all goods sold online in India is expected to reach $350 billion by 2030, from about $60 billion in 2021, as per the Commerce Department’s India Brand Equity Foundation.

“Ecommerce continues to reach a scale where it is impacting almost every industry from food to insurance to building materials, with IBEF estimating online penetration of retail to reach 10.7% by 2024,” JM Financial says in a report titled ONDC: Disruption or Evolution.

“This implies that the shift to digital is inevitable and the government is trying to ensure that this shift creates value for all participants of the ecosystem.”

“An ideal state would be when nobody will be bothered about ecommerce.”

(Updated to add context on the likely impact on the ecommerce sector as more participants enter the space.)