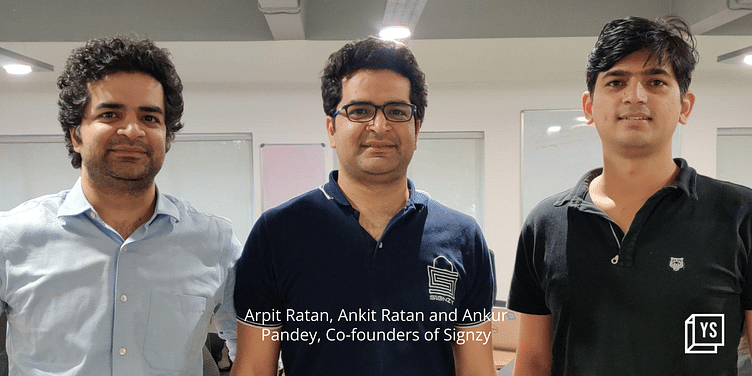 The company will utilise the capital to expand its no-code platform for workflow digitalisation to global financial institutions.

The company had last raised $8.4 million in a staggered Series A round in 2020 from Vertex Ventures, Arkam Ventures, Mastercard, Kalaari Capital and Stellaris Venture Partners.

In a statement, Signzy said that it will utilise the capital from the current round to enhance its No-Code Workflow Digitalisation platform and solutions for adoption by global banks and financial services providers.

He added, “The solution has been developed from the ground up to allow banks and financial services providers to roll out and offer fintech-like user experiences in a matter of days, not months or years.”

Signzy claims to work with nearly 250 financial institutions globally, including four largest banks in India, top three acquiring banks in the US as well as in partnership with Microsoft and Mastercard. The company has also filed eight patents in the US and nine in India so far. Earlier this year, the company received a US patent for banking in the metaverse.

“The team at Signzy has really impressed us with their No-code digitalization platform for the financial services industry, which we believe is the first of its kind anywhere in the world and solves real pain points for their customers. Their technology has been enabling banks to undergo rapid transformation without changing the underlying legacy systems,” said Gopal Jain, Managing Partner of Gaja Capital in the statement.

Signzy competes with global players such as Onfido and Jiffy.ai, apart from Cashfree Payments in India for some of its offerings.