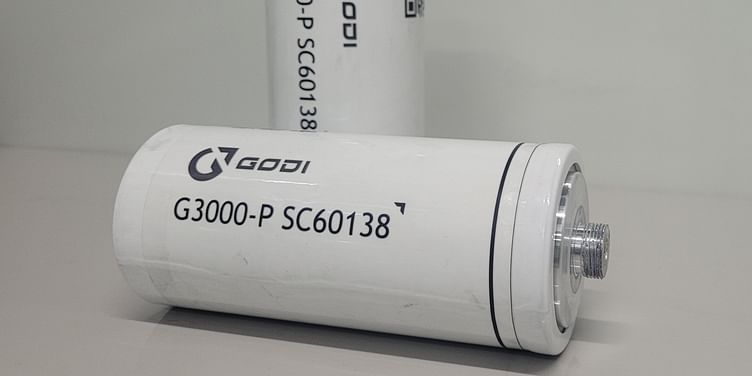 The use of these supercapacitors along with battery packs would help improve the battery life in electric vehicles and renewable energy storage system applications, according to the company.

﻿GODI﻿ India, a leading lithium-ion cell manufacturer in India, announced that it has manufactured India’s first-ever 3000F high-power supercapacitors at its facility in Hyderabad.

A supercapacitor is a device that stores and releases electrochemical energy.

The use of these supercapacitors along with battery packs would help improve the battery life in electric vehicle and renewable energy storage system applications, according to a release shared by the startup.

Godi India is planning to commission 200 kWh of supercapacitors production facility for local requirements as well as exports, the company said in the statement. The startup is keen on developing customised supercapacitor products according to each segment’s strategic requirements in addition to fully localising the supply chain of supercapacitor manufacturing in the next one year.

“GODI India is producing cost-effective and plant-based carbon-carbon supercapacitors using water-based electrode processing. At present, we are in the process of developing high-voltage lithium-ion capacitors, as well. We are also working on hybrid capacitors with higher energy densities to replace lead-acid batteries in a wide range of applications,” said Mahesh, according to the release.

The company says it has a variety of supercapacitor products ranging up to 3000F.

F stands for farad, the unit of electrical capacitance, which is the ability of a body to store an electrical charge. Godi India says its capacitors are environmentally sustainable and highly recyclable.