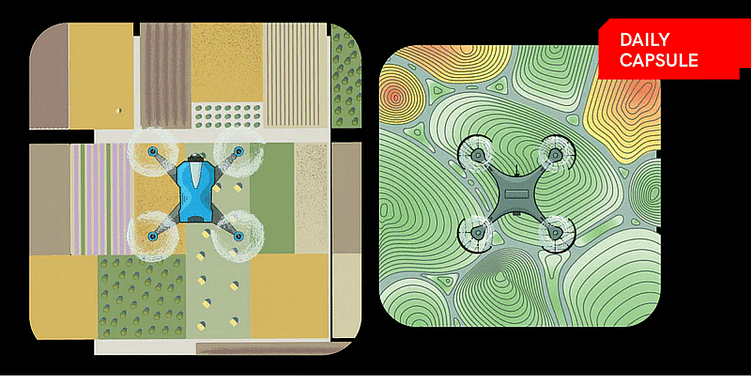 From clarifying the rules for private contracts with the release of the Drone Rules last year to providing financial support via a PLI scheme, the Centre has ramped up support for drone startups.

In other news, ﻿BYJU'S﻿ raised $250 million in a fresh funding round from existing investors. Media reports claim that the current round was raised at its last-recorded valuation of $22 billion, though the edtech startup hasn’t confirmed it.

This is after BYJU’S announced it was laying off ~5% of its workforce “to avoid redundancies and duplication of roles” last week. The company said it is prioritising achieving overall profitability by next March.

Meanwhile, ﻿Flipkart﻿’s metaverse has gone live. Called the Flipverse, it will help consumers discover and shop for products on a “photorealistic virtual destination”.

And, here’s an incredible timelapse video of the ESA-led Solar Orbiter approaching the Sun.

But fret not as wings of wax, the Solar Orbiter has not.

Here’s your trivia for today: When was the first portable music player launched?

From clarifying the rules for private contracts with the release of the Drone Rules last year to providing financial support via a PLI scheme, the Centre has ramped up support for drone startups.

However, the biggest push has come from the government’s decision to start issuing multiple tenders worth tens of crores of rupees each for drone services.

Purplle’s next leg of growth

Its next leg of growth will come from scaling up the reach and penetration of its private brands in offline markets, said Founder and CEO Manish Talreja.

Amazon Web Services (AWS), Google Drive, and Dropbox are popular storage options. However, one can’t store files on these services for free indefinitely.

Enter Lighthouse Storage, a blockchain startup that allows users to store files in a decentralised manner, which allows customers to pay only once and store files forever.

Data on the go:

When was the first portable music player launched?

Answer: In 1979, the Walkman TPS-L2 was launched as the first-ever low-cost personal stereo.