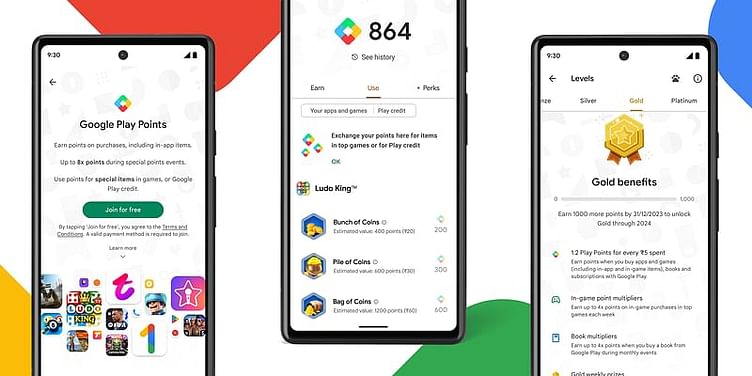 Google Play Points, currently available in 28 countries, will be rolled out in India in the coming week. It will offer users perks and prizes upon making purchases through Google’s app marketplace.

﻿Google﻿ has launched its global rewards program Google Play Points in India. It would allow users in the country to earn points and rewards upon making purchases through Google’s app marketplace, including in-app items, apps, games, and subscriptions.

The program, currently available in 28 countries, will be rolled out in India in the coming week with four levels — Bronze, Silver, Gold, and Platinum, offering users perks and prizes depending on a given users' tier.

Google has partnered with developers of popular apps and games to help users redeem their points for special in-app items.

Google’s announcement comes a month after its developer-friendly move of allowing non-gaming app developers in India and four other regions to offer an additional choice to users for billing, alongside its own Google Play billing system.

Both Google and its rival Apple control their app marketplaces. Globally, the tech titans have come under the regulatory radar for collecting a 15% to 30% service fee for in-app purchases. In India, Alphabet’s Google has come under scrutiny by the Competition Commission of India for its app store payment structure.

India is one of the leading downloaders of apps and games in the world and Google Play is a main mobile app distribution channel on smart devices running Android OS, with most downloads of Android apps occurring through Google’s app store.

In 2021, Android held a share of 95.8% of the mobile operating system market in India, according to database company Statista. The number of downloads in the Indian app market is projected to reach 31.5 billion downloads in 2022.

“From leading in app adoptions to emerging as a large global developer hub, India will play a critical role in the evolution of the global app ecosystem in the coming decade,” Aditya Swamy, Director, Play Partnerships, recently wrote in a blog post.