From Powerland: Electric ATVs for agriculture, defence and adventure sports 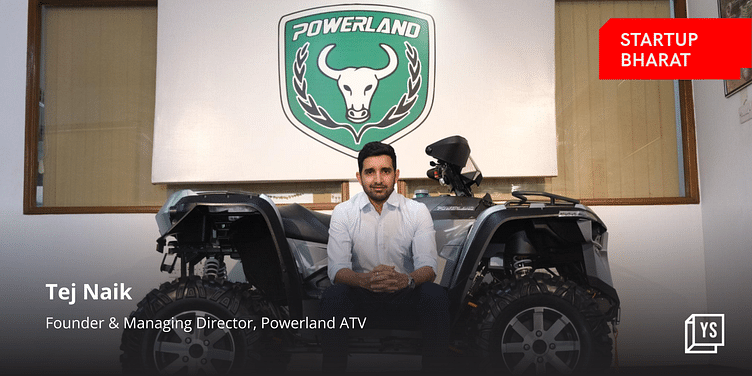 For a long time, Narayan Naik, belonging to a Goa-based family business, had wished to enter the automotive space. During the Portuguese occupation of Goa, his family imported Peugeot cars for the Indian market, which ignited a young Narayan’s interest in cars.

In 2000, the ardent fan of automobiles decided to import diesel-powered all-terrain utility vehicles (ATVs) and sell them in India for agricultural use. However, high import costs put his dream to a halt.

In 2014, Narayan’s son Tej Naik graduated from Cardiff University, Wales, and opted to fulfil his father’s dream. He decided to manufacture ATVs locally to cut down on costs and make the product affordable for Indian consumers.

An auto enthusiast himself, Tej had won the National Amaron Karting Championship in 2007.

With co-founders Narayan and Tej at the helm, Powerland was born in 2017 with two employees and a road-legal diesel ATV tractor named 900d.

With an in-house team of 25 employees, ﻿Powerland﻿ manufactures its ATVs at Goa’s Verna Industrial Estate, with 400 units manufactured per annum.

Moreover, the Goan company is in the final stages of getting its European certification to launch Tachyon—a 4x4 electric ATV tractor—fully designed and developed in India.

According to Tej, Tachyon will be one of the fastest 4x4 electric ATVs globally, with 800 nm of torque at the wheels and 0-60 kmph in less than four secs. Once certified, the vehicle will be sold in the European markets for agricultural, forestry, tourism, and personal mobility uses.

Besides, it works closely with the Defence Research and Development Organisation (DRDO) to make an autonomous electric ATV for defence purposes.

The sector requires vehicles with specific requirements to tread on narrow pathways, uphill in extreme off-road terrain, and in extreme weather conditions for logistics and border patrolling.

Tej says Powerland’s electric ATV can help meet these conditions since the vehicles are 4 feet wide and are silent when driven.

While these vehicles cost upwards of $10,000 (about Rs 8 lakh) in India, more localised procuring of components and increased production capacity will help Powerland price its ATVs more competitively in the future, Tej says.

It sees nearly 80% of its domestic sales from the B2C segment. On the other hand, about 95% of its international sales come from distributors based in Europe, the US, and South America.

The startup expects the B2G sector in India to grow rapidly over the coming years.

In August 2022, Powerland raised $1.2 million in equity and debt finance in its pre-Series A round from Germany-based ILAFA Vertriebs GmbH, for an 18% stake in the startup to scale up its production.

Besides, ILAFA is a strategic partner for Powerland, helping it distribute its ATVs in major European countries, including Germany, Austria, and Switzerland, with a network of over 100 dealers.

“Notably, the funding partner comes from the ‘Mecca of Automobiles’ in Germany and has put faith in Powerland’s ‘Make in India for the world’ approach. Powerland has bagged an advance order of 300 units of Tachyon for the European market,” Tej says.

Earlier in October, the Goa state government signed a Letter of Intent with Powerland to set up a factory to manufacture 10,000 ATV units per annum, and it has begun the land allocation work.

Once the new facility opens, in a year and a half, the startup plans to begin with 5,000 units per annum and eventually double the production capacity.

Moreover, Powerland expects to increase its team size to 500 employees in the next three years.

Over the last two years, Tej says the company has grown 3X in revenue. It aims to grow 5X in 2023.

As per RoC filings, Powerland posted a revenue of Rs 2.01 crore for FY22. The company claims to be growing rapidly and expects to register upwards of Rs 8 crore revenue this financial year.

From ecotourism to offline stores: Goa-based BLive is accelerating adoption of EVs

According to Global Market Insights, the global ATV market size exceeded $3 billion in 2021, projected to expand by over 6% CAGR between 2022-2030.

“In India, Polaris Industries is the only dominant player. All major players are focusing on petrol ATVs and electric utility terrain vehicles (UTVs). Powerland has the first-mover advantage in the electric ATV space in India to target the niche segment,” Tej says.

He adds, “The only competitors in the globally electric ATV space are Eco-Charger Quads from the UK and DRR and Daymak from North America.”

At present, Powerland sells across pan-India, Europe, the UK, North America, Norway, Brazil, and some countries in South America.