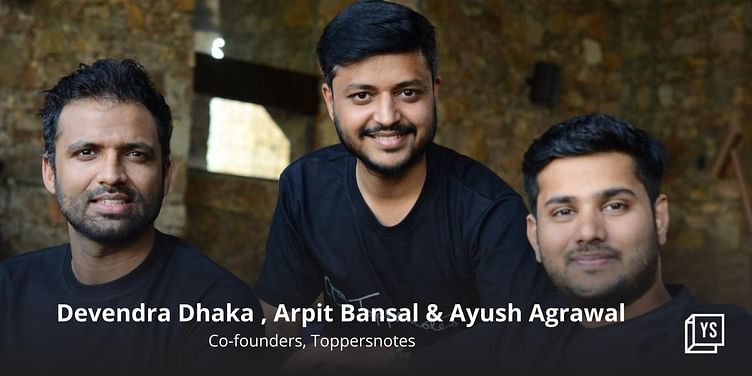 The Jaipur-based edtech startup says it has grown at 86 % CAGR. With a current monthly run rate of Rs 1.8 crore and ARR of around Rs 20-21 crore, the startup is projecting a revenue of Rs 20 crore for FY23.

Jaipur-based competitive test prep startup ﻿ToppersNotes﻿ turned profitable in August within 12 months of raising its first institutional round. It has also doubled its monthly revenue to Rs 1.80 crore in the last six months.

In an interaction with YourStory, Ayush Agrawal, CEO & Co-Founder, Toppersnotes says that the team was in burn mode on an m-o-m basis before August.

Since August, its customer acquisition cost (CAC) has dropped by 7–8%.

“Our growth strategy is sustainable led to clocking profits in August as we doubled our revenues to Rs 1.80 crore. We are now scaling without external capital and are profitable on a month-on-month basis,” he says.

Speaking about its strategy Ayush mentions, “We have realigned the company's growth strategy with profitability sustainability by limiting the number of experiments to places where we can get assured return in shorter as well as longer run. We have also worked on alternative business models which need lesser cash burn with similar outcomes.”

The team says it has grown at 86% CAGR (compound annual growth rate) year-on-year and 11% m-o-m in 2022. With a current monthly run rate of Rs 1.8 crore and ARR (annual recurring revenue) of around Rs 20-21 crore, the startup is projecting a revenue of Rs 20 crore for FY23, out of which they have already done Rs 9 crores in the first 6 months.

“With our current efforts, we are expecting this number to grow 3 folds in the next 12 months,” claims Ayush.

Founded by IIT Bombay alumni Ayush, Devendra Dhaka, and Arpit Bansal, the company started as a bootstrapped platform in 2015. It started off as a publication of notes for exams like IIT and has grown to its offering of notes for more than 140 exams along with its app offerings. Its offerings cover national level, state level government job exams as well as entrance exams.

Toppersnotes operates as a D2C brand where students can order study packages made by toppers and experts of various exams either directly from its website or from other ecommerce websites like Amazon, Flipkart and get the phygital packages.

The company also has a B2B2C model. It has tied up with 20 coaching institutes and plans to sign 100 more in the next six months.

Toppersnotes has both freemium apps and paid app subscriptions.  The free Current Affairs app is for UPSC and State PSC aspirants and has almost 500,000 downloads. The paid learning app, with a subscription range between Rs 500 and Rs 5000 annually, provides videos as well as test series.

“Our key moat is that our product is an affordable virtual coaching, which is less than 1/5th of the price of coaching courses. We are leveraging technology to digitalise the services which coaching institutes give and using our expertise and platform to pass it on to students in a hassle-free way,” he adds.

The edtech player intends to expand its offerings to include 300 exams in the next 18–24 months. Toppersnotes is also looking to open franchise stores at strategic locations as the core product is physical. The company has so far served over 1.2 lakh students, who are paid subscribers and plans to touch a user base of over 2 lakhs in the next 12 months.

It is also looking to raise Series A capital to fuel its growth plans and strengthen its leadership position.

“We will be looking to raise Series A to fuel the growth plans which include going offline, acquiring more users, tying up with coaching institutes by taking the current no of 20 to 100 in the next 6 months, to help coaching centres improve the learning experience and outcomes for their students. It is important to note that for us coaching business is a partnership based growth model and not a competitive segment for our business,” adds Ayush.