8i Ventures announces first close of second fund worth $50M 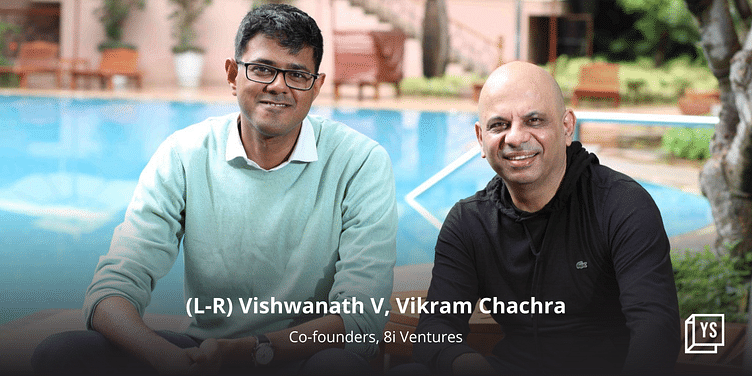 VC firm 8i Ventures, which raised $25 million as the first close of its $50 million second fund, plans to cut larger cheques and remain invested in startups for a longer period of time.

Early-stage venture capital firm 8i Ventures has raised $25 million as the first close of its $50 million second fund as it looks to write larger cheques for startups.

Founded in 2019 by Vikram Chachra and Vishwanath V, 8i Ventures is focused on fintech and commerce sectors. The firm's first fund was $15.5 million in size and notable investments include M2P Fintech, Slice, and Blue Tokai.

According to 8i Ventures, the value of its first fund has risen by 270% with a 100% internal rate of return, and it has already returned 27% capital to its investors. It made a 36x return on its seed investment in M2P Fintech.

The second fund of 8i Ventures had participation largely from family offices like Salgaocars and Kothari of DSP. The firm noted that these family offices had little exposure to internet economy companies and many of them had reinvested capital into the second fund.

The second fund will also allow 8i Ventures to have higher ownership in startups as the size of its first fund did allow it to do so. It expects to make around five to six deals a year, and the final closure of the second fund is expected by March 2022.

Vikram Chachra, Founding Partner, 8i Ventures, said, “We believe fintech is the single largest venture opportunity in India. Every single friction point in India’s financial economy is a potential billion-dollar startup opportunity. Our key insight when we launched Fund I was that consumer payments and commerce are a trillion-dollar opportunity. Since then, digital payments have swelled from $200 billion a year to $720 billion now. With Fund II, we have an added focus on B2B fintech and commerce, which we believe to be the next trillion-dollar market in India.”

Given the size of the second fund, 8i Ventures will continue to invest $1.5-2 million in each startup but will participate in subsequent funding rounds in high-growth companies with cheque sizes up to $10 million.

“At 8i, we wrote the first cheque into several outliers that, at inception, were unobvious winners. That’s because we partnered with founders targeting under-served categories, ignored by incumbents/industry players," said Vishwanath V, General Partner, 8i Ventures.