How Tier 2, 3 and 4 cities are contributing to India’s startup boom 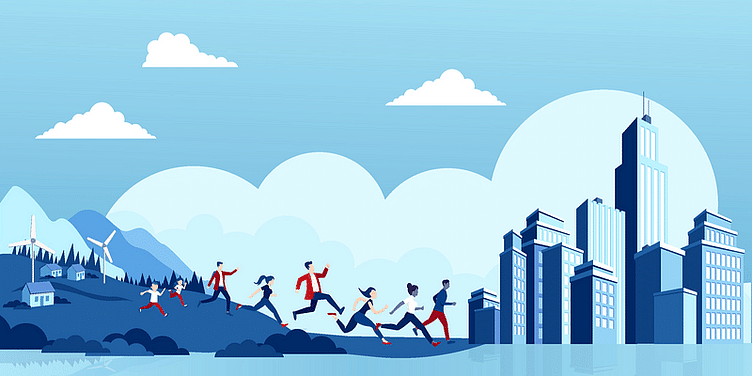 Solving local problems at scale ranging across issues like healthcare, education, agriculture, financial services is the key driving force of the increasing number of startup hubs from these parts of the country.

The ongoing tech revolution is driving economic growth and enabling global socioeconomic transformation. At the micro level, it has reached the Tier 2,3 cities of India and amped up the startup ecosystem in these regions. India’s development has finally extended beyond the metros which have long been the source of the words ‘startup’ and ‘entrepreneurship’ for decades.

India's lower-tier cities' population is becoming affluent and eager to spend. This change is ushered by government policies, improved infrastructure, shifting consumer attitudes, and a bump in private consumption in these areas.

Tier 2 & 3 cities account for nearly 50% of recognised startups In India. As more Indian founders lead companies successfully to IPOs or unicorn status, it sets off a virtuous cycle where success ignites aspirations among young entrepreneurs across the length and breadth of the country.

"We are looking at Digital India and startups," Prime Minister Narendra Modi said in his address from the Red Fort on India's 76th Independence Day. “Who are these people [behind them]? This is the talent from the Tier 2, Tier 3 cities and the talent that lives in a village somewhere.”

Solving local problems at scale, ranging across issues like healthcare, education, agriculture, financial services is the key driving force of the increasing number of startup hubs from the Tier-2 and Tier-3 cities of India. According to official government reports, in the last six years, startups created 7.68 lakh jobs in India, with a 14% increase in the number of people employed in India’s startups during the pandemic.

The growing number of young entrepreneurs in these cities today creates more value for society and the economy as a whole. The country is witnessing an ideal situation of people quitting an urbane life to come back and work at the grass-root level, building deeptech ventures in artificial intelligence and the internet of things across various verticals. With growing digitisation, these young entrepreneurs are contributing to the modernisation of local industries in the country and gaining access to new markets to realize opportunities in a broad scope of areas. This, inturn, positively impacts the job creation process and creates a ripple effect that motivates others to pursue their dreams.

According to the Deloitte Global Millennial Survey, young people are skeptical of traditional business models and pessimistic about economic progress. Rising digitisation has enabled the youth to lead the startup revolution. The literacy rate among the Indian youth has increased to over 90%, which means a digitally educated population can afford smartphones and access digital platforms.

A fintech startup-turned-unicorn, Razorpay, an industry leader in payment gateway services, has been used by 70 lakh people to learn English through their mother tongues, has emerged from Jaipur. Ecommerce giant, Shopkirana, which currently caters to a consumer base of 50,000 Kirana stores in eight cities across four states —Madhya Pradesh, Uttar Pradesh, Rajasthan and Gujarat, also originated from the city of Indore. DeHaat, a technology-based platform offering end-to-end agricultural services to farmers, is another success story from Patna (Bihar).

In the north, Jaipur records over 41 startup headquarters, according to research by YourStory. As for the south, Kochi, a port city in Kerala, is home to 16 startup headquarters. Besides these, Chandigarh records 15 startups, of which 12 startups are registered in Vadodara and Goa each.

In comparison, the share of the financing to start-ups in Tier-2 and Tier-3 has increased by 11% in a year. According to YourStory research, between Jan 2015 - July 2021, Tier-II city startups in India raised approximately $1.12 billion in funding across 305 deals.

Another critical driver of economic integration and consumption growth in lower-tier cities is improved digital infrastructure connectivity. This led to better access for young entrepreneurs from these cities across information, resources, people and talent, markets and more. As a result, these entrepreneurs could now tap into a worldwide circulation of ideas, knowledge, skill, and capital. In the absence of multiple, diverse connections, Tier 2 and 3 startups are limited in their access to information and services. Knowledge gives us more options and a better chance of solving challenges and understanding what we need to do to reach the next level.

Ecommerce platforms and social media are becoming more influential in lower-tier Indian cities. A BCG report released earlier this year found that 50% of online urban shoppers lived in tier 2 or tier 3 cities in 2021, a percentage that is projected to reach nearly 60% by 2030, as the number of smaller-city shoppers is increasing at almost double the rate of those in large cities. Coupled with modernisation and rising internet penetration, the needs of the typical rural consumer are no longer identical to what they were a decade before. This created unique problems, which in turn mandated unique solutions that these upcoming startups are fulfilling.

The government, for its part, is creating an enabling environment through its flagship Startup India initiative, which came into being in 2016. To galvanise the startup community and attract attention, the government has released a series of initiatives focused on increasing available funding through venture capital funds and funding for universities that encourage startups from these cities.

Similarly, the Department for Promotion of Industry and Internal Trade (DPIIT) also emphasised taking the start-up ecosystem to the small towns and suggested that unicorns should ‘adopt’ districts and catalyse regional development.

The state governments are also undertaking active measures to incentivise these young entrepreneurs and the startup ecosystem.

Kerala has come up with Kerala Startup Mission which has provided over Rs. 25 crores as an Innovation Grant to a wide range of technology and product start-ups since 2017 under Kerala Startup Mission (KSUM). In the last five years, the state has scouted more than 8,000 innovative ideas from tech startups, including student startups.

The Andhra Pradesh government has recently notified an IT Policy in 2021, which included several measures to develop the start-up ecosystem, including Rs. 100 crore funding for start-ups. The policy also mooted ‘Accelerate Start-ups in Andhra Pradesh (ASAP) – a flagship start-up promotion scheme for early-stage start-ups.

In recent years, the increasing cost of labour, housing, and land in first-tier cities has led many entrepreneurs — especially those in the computer, software, information technology, and ecommerce — to settle in second and third-tier cities.  A relatively lower cost of living also means that nascent startups bootstrapped or have yet to raise any significant funding can get a much greater bang for their buck.

The redistribution of skilled and unskilled labour driven by the pandemic and increased VC willingness to invest over Zoom calls rather than insisting upon in-person meetings are also expected to help give fresh impetus to the startup ecosystems in these tier 2 and 3 cities.

The ecosystem has grown, scaled and even produced some of India's most notable startups from these cities.