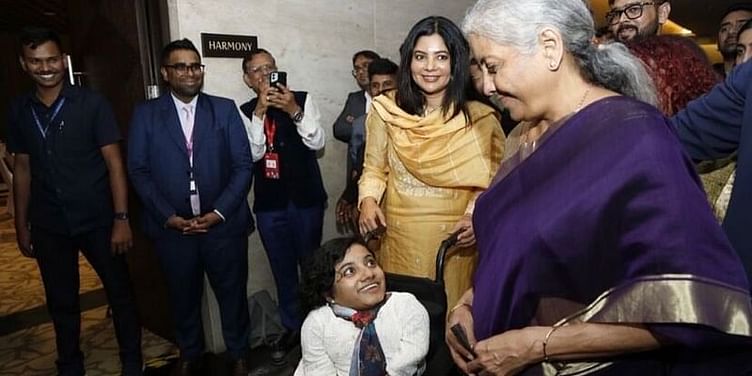 Born with a rare genetic condition, Dhanya Ravi was at TechSparks 2022, YourStory's flagship event, to spread awareness about the disorder and advocate the need for a more inclusive society.

Thirty-three-year-old Dhanya Ravi is neither an entrepreneur, nore an investor but was at TechSparks 2022, YourStory’s flagship startup-tech conference, to promote her cause.

“I’m here to meet innovators in the startup space to give them an idea of the gaps that exist in the healthcare space for the disabled to help future generations,” shared Dhanya, who runs an NGO called Aasman Foundation with her friends in Bengaluru.

Dhanya has had a tough childhood. Most of her time was spent in and out of hospitals. The rare brittle bone disease meant even the simple act of sneezing or coughing could trigger a fracture.

But despite being confined to a wheelchair, Dhanya is in high spirits and convinced that she can make a change in this space. “There are many early indicators of genetic conditions. These need to be addressed in their early stages. For instance, early genetic pregnancy tests should be made mandatory and affordable for all families,” said Dhanya, who shared these suggestions with Finance Minister Nirmala Sitharaman on the sidelines of TechSparks 2022.

In Dhanya’s case, when she was born in November 1989, her parents were unable to understand why she was crying all the time. It was only much later that doctor’s diagnosed her rare condition.

A genetic cell in every hospital will help every parent understand the condition of their child and also ensure that necessary care is given, she said.

Popularly known as India’s glass woman, Dhanya was home tutored until Class 10. She is now a freelance content writer, digital marketer, and a disability evangelist.

She is also advocating travel and accessibility challenges for the physically disabled. “I’m on a wheelchair and even if I want to take a metro I can’t. The infrastructure doesn’t allow me to access stations on a wheelchair,” she said.

In her appeal to the government, Dhanya said there needs to be a scheme of allowance that promotes accessible cabs and those that will allow people with disabilities to participate in mainstream programmes. This would also increase employment chances for the community.

“I hope that there is more awareness on genetic conditions and the next generation benefits from this,” said Dhanya, who has been advocating the need for a more inclusive society.