Levelling the playing field for women in the startup ecosystem 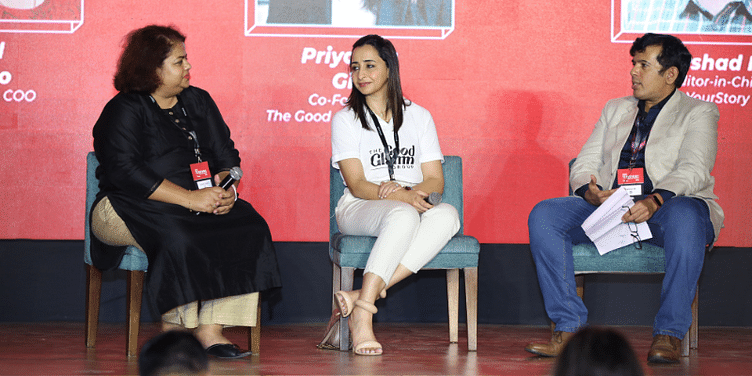 India's startup ecosystem has grown by leaps over the past decade, and several women leaders have emerged over this period running highly successful and pathbreaking companies.

And yet, an array of stubborn obstacles stand in the way. The result: the number of women entrepreneurs in the country remains abysmally low.

Some of these issues such as self-doubt and the lack of a work-life balance were central to a panel discussion featuring Mabel Chacko, Co-founder and COO of Open Technologies, and Priyanka Gill, Co-founder of ﻿The Good Glamm Group﻿, at TechSparks 2022, the 13th edition of YourStory's flagship annual event.

“We keep second-guessing whether we are the right people to do (something),” Mabel said in a conversation with Jarshad NK, Editor-in-Chief of YourStory. “It’s heartening that things have been changing over the past few years.”

Priyanka added that these issues were systemic and needed to be addressed at a grassroots level.

“If you look at a Standard XI classroom, how many girls pick up STEM subjects like Mathematics or the Sciences. That’s where a lot of our tech entrepreneurs come from," she said. "Are fathers in family businesses talking to their daughters at the dinner table? I think women do not have the same access to the networks men have."

A multi-pronged approach should be used to attract more women to entrepreneurship, as well as encourage more women to enter the fields of science and business, she said. “Signalling really matters. Until there is equality, we need to make an outsized effort."

Per Mabel, if you are a entrepreneur, whether a man or a woman, work is equal to life. Being a woman entrepreneur, however, is especially tough, because there is family is go back to and caregiving in addition to running a company.

“Being an entrepreneur, one must make tough decisions, go through failures, have the grit to start all over again, listen to that bug, and go ahead. Of course, in all these, work-life balance goes for a toss,” she said.

When the entire team is watching you, and even if you are feeling low, you have to put on a poker face and power through it, Mabel said, adding how her co-founder Deena Jacob returned to work only 15 days after giving birth to close a fundraising round.

Priyanka believes work-life balance is a myth and doesn’t subscribe to its existence.

“I think I find balance in whatever I am doing throughout the day," she said. "When I go home, I cease to be an entrepreneur for a bit. I think I compartmentalize my life very well. I came back to work soon after I had a child. But that’s not applying the same pressure on other women. It’s my choice.”

On self-doubt, Mabel said it comes “with an awesome sixth sense women have, it's what helps you navigate through the biggest problems. Eventually, you learn when to listen to it, and when to mute it."

To her, there are several outstanding questions–am I the right person to do the job, should I have a co-founder, how am I going to manage everything.

“Self-doubt might be a little more apparent in women though every entrepreneur is plagued by it. Self-doubt shows you are thinking. The biggest problem with women is that we tend to underplay ourselves,” Mabel said.

Asked if hiring of women may take a hit with the downturn looming large, Priyanka said a correlation between the two is incorrect. “Every entrepreneur should hold on to their values. That will help you during tough times.”