WhatsApp rolls out ‘communities’ feature to bring groups together 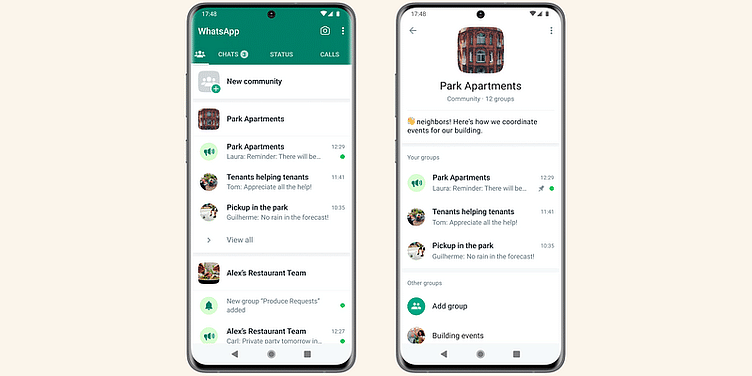 The communities feature will be available to users across the globe over the next few months.

Meta Chief Executive Officer (CEO) Mark Zuckerberg on Thursday rolled out a new feature for WhatsApp called ‘communities’, allowing users on the messaging service to bring together separate groups under one umbrella.

The communities feature, which was first announced in April, will be available to users across the globe over the next few months.

Communities like neighbourhoods, parents at a school, and workplaces can now connect multiple groups together under one umbrella to organise group conversations on WhatsApp.

WhatsApp users can access the new feature by tapping on the new communities tab at the top of their chats on Android and at the bottom on iOS. They will be able to start a new community from scratch or add existing groups.

Once in a community, users can easily switch between available groups. Only admins are allowed to send important announcement messages that are sent to everyone in the community.

The Meta-owned messaging platform also released features such as the ability to create in-chat polls, 32-person video calling, and groups with up to 1024 users. Messages in a community would be protected with end-to-end encryption.

WhatsApp said these features can be used in any group, just like emoji reactions, larger file sharing, and admin delete, but will be particularly helpful for communities.

The instant messaging app, which has over 2 billion users, said it has been working with over 50 organisations in 15 countries to build communities to meet their needs and claimed that these new tools are helping groups better organise.