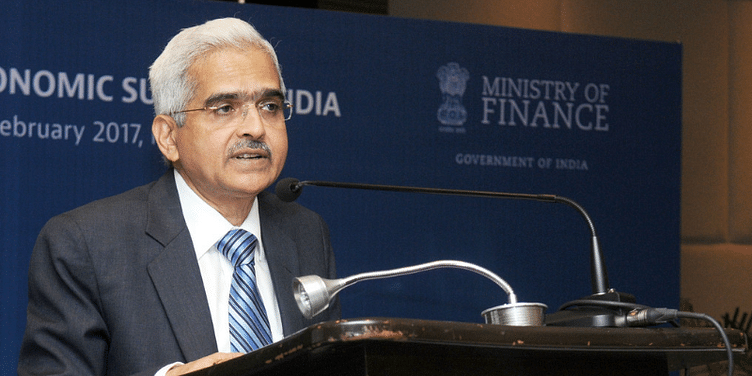 RBI Governor Shaktikanta Das has reiterated the RBI's demand for a complete ban on private cryptocurrencies, saying such instruments do not have any underlying value and are speculative in nature.

Reserve Bank Governor Shaktikanta Das on Wednesday warned that allowing private cryptocurrencies to grow can precipitate the next financial crisis.

Speaking at the 'BFSI Insight Summit' organised by Business Standard, Das also said the government and the central bank have been working in a coordinated manner to tame inflation and the Centre is "equally serious" about curbing price rise.

On private cryptocurrencies like Bitcoin, Das reiterated the RBI's demand for a complete ban, saying such instruments do not have any underlying value and are speculative in nature.

"It's a 100% speculative activity, and I would still hold the view that it should be prohibited. If you try to regulate it and allow it to grow, please mark my words, the next financial crisis will come from private cryptocurrencies," the RBI governor said.

"Cryptocurrencies have huge inherent risks from macroeconomic and financial stability (perspective) and we have been pointing it out," he added.

The RBI governor further said developments over the last one year, which include the latest crash of cryptocurrency exchange ﻿FTX﻿, which has been termed as one of the biggest financial frauds in the history of the US, illustrate the threat posed by such instruments.

"After all these, I don't think we need to say anything more about our stand," remarked Das, adding that private cryptocurrencies' valuation has shrunk from $190 billion to $140 billion and there is no underlying value for the market-determined price.

On the central bank digital currency (CBDC), Das said such fiat digital money is the future and central bank efforts are not motivated by a fear of missing out on the action created by private cryptocurrencies.

He said the Indian CBDC pilot is different from having a UPI wallet, and added that it has certain unique features like the ability to return the money in 24 hours as well.

An eye on inflation

The RBI governor said the RBI's measures like rate hikes and liquidity actions have been complemented by government's steps on the supply side.

"I must say that to check inflation, there has been a very coordinated approach between the central bank and the central government," Das said.

"Government also is equally serious about controlling inflation... everyone is interested in bringing down inflation."

The governor also said this government's last full Budget before the general election in 2024 will not have any bearing on the conduct of the monetary policy.

In what can be seen as a slight tweak to 'Arjuna's eye' analogy made on November 2 about RBI's focus on inflation, Das on Tuesday said "Arjuna only looks at inflation and growth".

The inflation print for November has come under 6%, within the tolerance band, for the first time after 10 months. The RBI had earlier written a letter to the government outlining reasons for missing the 6% inflation target for three straight quarters.

The RBI governor said underlying economic activity in India continues to be strong, but external factors will cause some "dent" to the economy.

Das highlighted that the RBI tracks 70 fast-moving indicators and classifies them as red, yellow, or green, depending on the outcomes, and added that most of them are in the "green box".

It is the external sector, which is mired by a fear of recession or clear visibility about slowing growth in a large part of the world, where the challenges lie, he said, adding that the impact on external demand will "dent" the economy.

Earlier this month, the RBI revised down its growth estimate for FY23 to 6.8% from 7%.