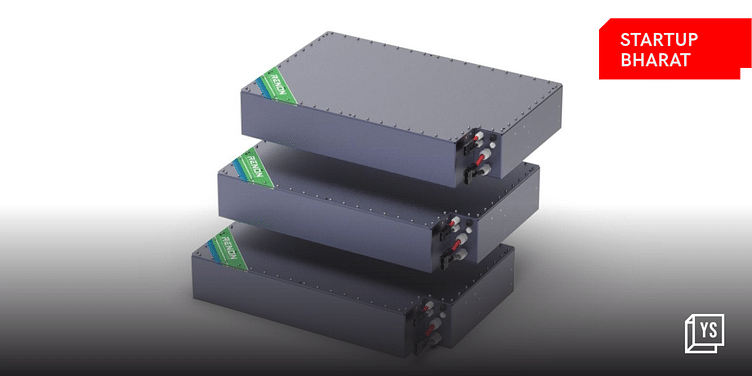 Aditya Vikram and Vineet Mittal wanted to use renewable and sustainable energy to generate an 'infinite' supply of energy that could pave the way for an all-electric future.

In a conversation with YourStory, Aditya, Co-founder and CEO of ﻿Renon India﻿, says, “While establishing the company, the biggest challenge was to enter the industry, which was still in its infancy in India.”

“Fortunately, the awareness around the benefits and potential of clean energy, especially the rise of electric vehicles (EV) demand in India, led to increased demand and a larger market for Li-ion batteries,” he adds.

Bootstrapped with Rs 15 crore, the startup operates on a hybrid model of horizontal and vertical mixed units.

Aditya explains, “As individual verticals, we have functions like electronics, mechanical, software, quality, and manufacturing, where some employees also work in tandem with specific horizontals like application and development engineering.”

The B2B startup builds its mobility packs to perform on Indian roads, comprising a variety of riding and climatic conditions. The company makes its battery packs as per customers' tailored requirements.

Its Li-ion energy storage solutions have a range of applications—from home to commercial to industrial, catering to automobiles, defence, solar, telecommunications, and healthcare sectors.

With over 50 employees and a team of more than 30 cross-functional engineers, the co-founder says, “This number is rapidly increasing with the steady growth of the company.”

Besides Aditya, the company has Ganesh Moorthi as the CTO and Vineet Mittal as a director in the company. The company’s core team comprises Ankit Singhania, Sunay Shah, Aditya Singhania, and Saurabh Aggarwal.

In 2021, Renon India established a dedicated research and development centre in Bengaluru. The company intends to achieve the milestone of over 300 MWh of production line capacity soon, capable of manufacturing nearly 3,000 battery packs per month.

The present and future

At present, the startup operates from Gujarat, Delhi-NCR, Hyderabad, and Bengaluru.

Depending on future demand and market scenario, the firm is open to starting its manufacturing facilities outside Gujarat.

Speaking of future plans, Aditya says, “We look forward to expanding our sales and service team in various parts of India by July 2023. We have diligent plans to expand our service team into 10 different zones (geographically and strategically) across the nation.”

“We are driving this growth with our cutting-edge battery manufacturing systems and pack-building capabilities. We are geared up to set a new standard in the energy storage industry,” Aditya says.

Renon is expecting a growth of 50% CAGR in the next three years. Moreover, it also has plans to raise $2 million in funding, which it will use for R&D, capex expansion, tech stack development, etc.