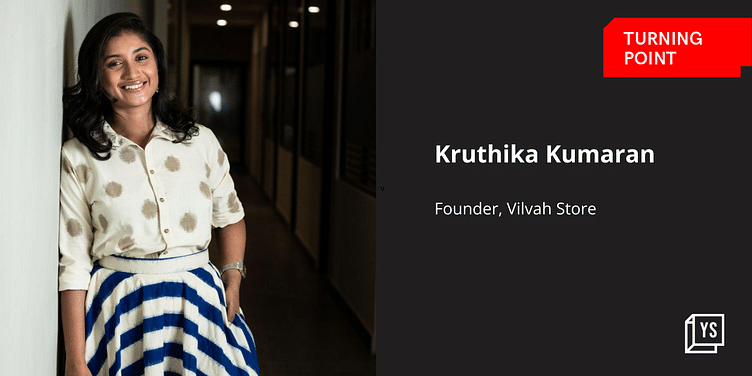 The Turning Point is a series of short articles that focusses on the moment entrepreneurs hit upon their winning idea. This week, we feature Coimbatore-based skin and haircare brand Vilvah.

Hundreds of players in the beauty market, some worth millions of dollars in revenue, offer organic products that suit the Indian skin but rarely deliver on their promise. However, one startup from Coimbatore is making skincare products derived entirely from natural ingredients.

Founded in 2017, the ﻿Vilvah Store﻿ offers a range of products such as soaps, hair care products, mosquito repellent, deodorants, body butters and body yoghurts, and moisturisers. This week, the company even launched a sunscreen.

Founder Kruthika Kumaran did not set out to build a brand, instead, she wanted to create a soap to help with her daughter's eczema.

Kruthika has also lost her mother to a complication arising from a skin condition.

The brand, the founder says, grew organically. She initially experimented with the ingredients in her kitchen and the resulting concoctions were used by the family.

The turning point in her journey came when she began getting requests from other people to sell her products.

Kruthika says she soon realised a gap in the market for natural and sustainable products. “This is a brand that was not built like a brand. We didn't have that notion when we started. It's a passion, it's something that I want to do for my daughter and it eventually turned out to be a brand,” says the founder.

Vilvah, which was launched with a Facebook and Instagram page in 2017, currently has three stores and a website in addition to its social media accounts. She was later joined by her husband Kumaran.

The use of goat milk has been a game-changer for the brand. “Coming from an agricultural background, I created products with goat milk, as they are known for their extreme moisturising qualities,” shares the founder.

“As a brand, we stood because of the milk-based range. We have an entire range now with milk-based skin and hair care products,” she adds.

The biggest challenges for Kruthika were building a team and choosing the right ingredients. “It was challenging for us to create that kind of a formulation using only naturally derived products to perfect the formulation,” says the founder.

Customer feedback helped the startup refine its products. “We take a lot of feedback and we really listen to the customers and we have set up a research and development team that works towards all this feedback,” she says.

The founder also replies to direct messages on social media. The team has now hired a cosmetic scientist and invested in research.

The company says it will close Rs 30 crore in revenue in FY23.