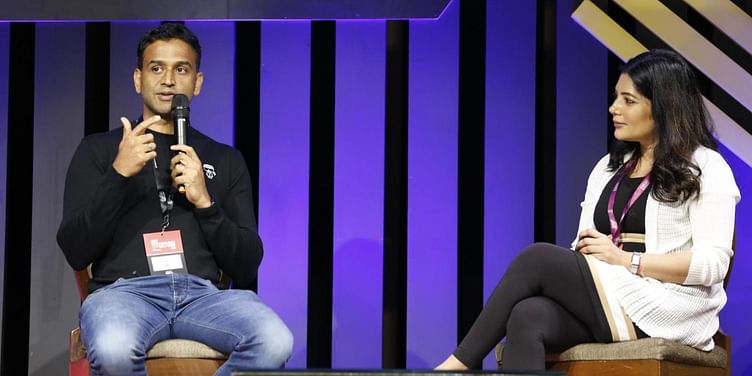 The Co-founder and CEO of India’s largest trading platform shared some crucial nuggets of wisdom on money and life at India’s biggest startup-tech event.

For a generation of entrepreneurs, Zerodha is a significant role model, not just for the scale at which it has grown but also for doing so while sticking to its values. A large part of this stems from how India’s largest stock broking company was established—with humility and authenticity.

Creating value for traders remains Zerodha’s core USP. But the company isn’t merely about the compounding power of money. In an insightful conversation at TechSparks with YourStory Founder and CEO Shradha Sharma, Nithin Kamath, the 43-year-old Co-founder and CEO of Zerodha, discussed multiple facets of his tryst with trading and journey as an entrepreneur.

Addressing a packed hall that accorded him near-celebrity status, Nithin advised waking up with purpose and a focus on getting better every day, shining a clear path to increasing one’s odds.

“We need to survive long enough to get lucky, which is often a secret sauce for success,” Nithin said, sharing his mantra on making smart money decisions and compounding as a means to enriching lives.

Here are a few learnings, including on unlearning, from Nithin’s conversation:

There exists an inexplicable bond between time and money. For Nithin, that relationship began early with stock market trading. Even as a youngster, Nithin had set his mind on specific rupee goals, and put up posters of the things he had wanted to acquire.

The manifestation worked, and Nithin would end up acquiring those things later in life. But as he matured, Nithin came to a realisation: that decisions taken to optimize for quick money-making may not always be the right way, often because what seems right in the short-term may not work in the long run.

“Money complicates choices leading to decision paralysis,” Nithin told Shradha during TechSparks last month, the 13th edition of YourStory’s flagship startup-tech event. “But, on the other hand, saying we do not need money once it is made is borderline hypocrisy.”

Which explains why Nithin is insistent on introducing the concept of money—including risk-taking and compounding—early in schools and colleges. Because many people, even adults who have struck it wealthy, struggle to manage money and could end up making decisions based on bias, greed or fear.

As with money, skills, too, blossom with time. If nurtured.

Nithin believes that the one skill India needs to become both wealthy and inclusive is entrepreneurship. Key to this are decision frameworks on risks and rewards, and developing storytelling skills to inspire more people to become entrepreneurs.

Nithin does not view Zerodha, founded in 2010, as a business run for 12 years, but as a 20–25-year entity factoring in his own early obsession with the stock markets and trading.

The entrepreneur’s focus on health too plays into the habit of nurturing skills. “Everyone does not need to work out, but each one of us needs to move,” he said. “The same concept of optimizing for short-term versus long-term is important here too.”

That’s because compounding for skills can work better with good health. When a company treats its people’s health as a priority, as Zerodha has often done, and those people stay healthy and spend more time with the company, they inevitably end up improving their skills.

At Zerodha, the core team has spent an average of over 7 years with the company. They learnt on the job, and that learning started creating magic over time.

The biggest lesson in understanding Zerodha’s journey is how a company can be built with humility and value. Key discussions from Zerodha’s early days that remain a constant even today have revolved around helping traders do better and make more money, as well as helping people do better with their money.

“Someone will catch up on the product, but it is difficult to catch up on the philosophy of the business,” Nithin said. And that is where Zerodha wants to create its differentiation. By building a brand that people trust. This manifests in routinely making business calls with a laser focus on what customers need, or don’t—such as minimizing push notifications to avoid bombarding them with messages.

Another call was to not hire relentlessly and then be forced to reverse those decisions. Even as Zerodha grew from one million customers to 10 million, it did not have to add too many people, working with a 36-member tech team to build a category-defining product from India.

For founders seeking to create long-term value, an underlying lesson from Nithin’s discussion was a lesson in humility and stoicism: staying rationally optimistic, factoring in worst-case outcomes, and establishing clear expectations for everyone in a team.

Finally, on unlearning and valuations

It is even more critical to unlearn certain misconceptions. One such is valuation, according to Nithin. While some industry insiders and experts believe in external benchmarks such as valuation as key measures of a company’s worth, Nithin reiterates a simple fact—what might be right for an investor may not always be right for the customer.

“What is important to know is that valuation is an obligation. It is not money. Neither is it a benchmark to measure ourselves,” Nithin said. “Building a business with real value takes time.”

A case in point is the still bootstrapped Zerodha’s outlook towards employee stock options. In 2017-19, the company initiated restricted stock options. During the pandemic years, Zerodha executed a buyback of shares.

Even then, while some smaller, investor-backed competitors were valued higher, Zerodho refrained from raising its internal estimate of the company’s worth. The logic was this: “No one is getting liquidity at short-term notional valuations.”