What it takes to be resilient: Sania Mirza and Games 24x7’s Trivikraman Thampy on learning to deal with struggles and failures 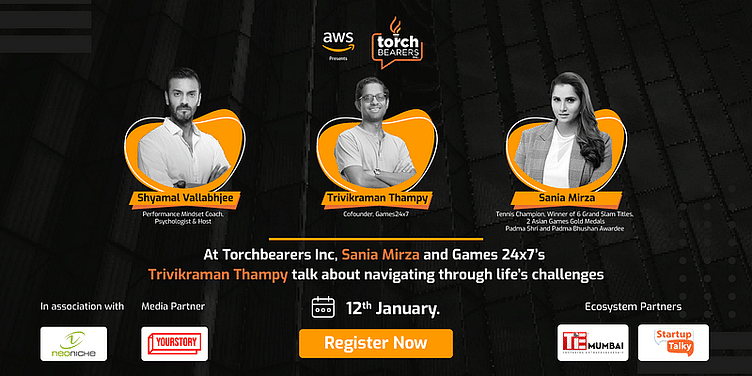 In the latest episode of AWS Torchbearers Inc., an initiative by AWS and NeoNiche, Sania Mirza, former tennis doubles World No. 1 and Trivikraman Thampy, Co-founder, Games24x7 share their life’s experiences and how they faced their moments of doubt and found the inner resolve to keep it going.

Life is an uncertain roller coaster. Struggles, failures and challenges in personal and professional life are inevitable for everyone. While you can choose to rebel against all of life’s challenges, learning from such experiences gives you the grit to battle failures and helps you become a better individual. In the latest episode of AWS Torchbearers Inc., an initiative by AWS and NeoNiche, Sania Mirza, former tennis doubles World No. 1 and Trivikraman Thampy, Co-founder, ﻿Games 24x7﻿ share their life’s experiences and how they faced their moments of doubt and found the inner resolve to keep it going.

“As young girls, we are more often told that we can’t do something rather than we can. Backing myself was the one thing that kept me going. I’m more motivated when there’s a challenge in front of me. When somebody says you can’t, I think, well now I’m definitely going to,” said Sania.

Sania is a Padma Shri and Padma Bhushan awardee and also the winner of six Grand Slam titles and two Asian Games gold medals. Despite such accolades up her sleeve, Sania laments about how women in general are questioned more about their life choices. No matter what you do, there are going to be questions and judgements passed, Sania feels. But that’s something you have to accept if you want to be in the spotlight. “Don’t be afraid to make your own choices,” she advises.

“It’s hard to get to #1, but it’s harder to stay there. Because when you’re the hunted and not the hunter, life is just harder. When you’re #1, no matter who or where you play, you’re supposed to win that match,” Sania added.

From an entrepreneur’s perspective, Trivikraman talks about how there’s no growth without pushing boundaries. “If you aren’t growing, you’re dying,” he believes. According to him, when you get your goals right and the objectives behind that, half the battle is won.

For Trivikraman, it is very important for entrepreneurs to know everything that’s happening in the business. If not, then you’re in trouble.

“My biggest job is ensuring we have the right culture in the organisation as we grow. We describe our culture as the science of gaming,” he said.

Trivikraman stands by the motto that amazing companies are built by amazing teams. To actually build a company on this philosophy isn’t that easy. “We go back to our culture, looking for people who live and breathe the user. So, we can empathise with them, feel their pain and find a solution. That's critical for us,” he added.

“Sometimes you say, yes, the odds are against me. But I believe in it, and do it,” he concludes.

Hosted by Shayamal Vallabhjee, a renowned leadership performance coach and India’s first sports scientist, the episode will see Sania and Trivikraman talk about displaying unwavering confidence during trying times and doubling down on your efforts.

As Shayamal puts it, “It’s the boring things repeated everyday that lead to mastery, lead to becoming a unicorn, lead to being a Grand Slam champion. If you repeat that boring, that increases your probability of becoming that person you want to.”

The show has been conceptualised and presented by NeoNiche, one of India’s leading integrated marketing solutions providers. AWS joins as its strategic partner to reinforce the idea behind the show - scaling, adapting and succeeding, just as AWS has been supporting the gaming industry for 15 years and is the trusted partner of choice for leading gaming companies around the world. TiE Mumbai and Startup Talky are ecosystem partners of Torchbearers Inc. YourStory is a media partner.