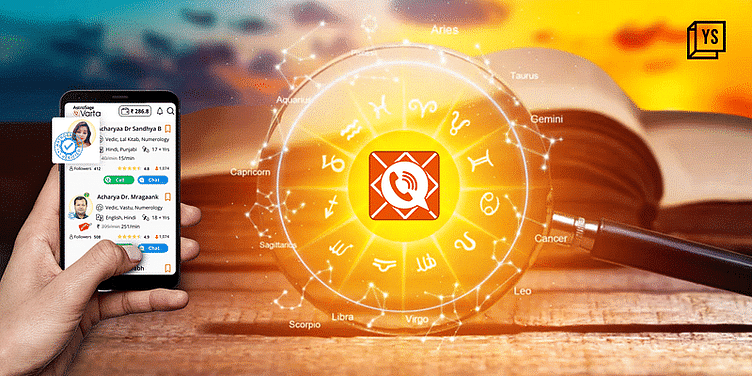 Astro Sage Varta, which was launched on the PlayStore in August 2020, currently has over 10 lakh downloads and a 4.7 rating.

In an age of uncertainity, the curiosity to know what lies ahead beckons. Practices like astrology, palmistry, kundli reading and reiki have taken on a new form in the digital era. In the last two years alone, a slew of startups have popped up vying for a piece of this growing market, which by some estimates is at about $40 billion.

One among them is ﻿Astro Sage Varta﻿, which was launched around 2020. It currently has over 10 lakh downloads and a 4.7 rating, according to the Google Playstore.

Users are first greeted with a orange-white themed interface, which resembles a temple, followed by the app logo—a phone receiver that looks similar to Viber, an app which can be used to make free calls. There is an option to pick your language preference from the listed options that include English, Hindi, Bengali, Tamil, Telugu, and Marathi.

The sour note is that the app asks you for a number of permissions—like your phone, email and SMS. There seems to be no way to evade these permission requests. If you want to consult with any astrologer, you need to create an account. Registering for a session mandates that you give the app this information as well.

How technology is giving astrology startups in India a fillip

The app also seems to drive home the authentic astrologers' claim rather strongly, almost in an attempt to drive away any scepticism about its credibility. Astro Sage Varta divides astrologers based on category—Vedic astrologer, Lal Kitab (Red Book) astrologer, Vastu Experts among others. Vastu refers to Vastu Shastra, an Indian way of architecture, based on ancient principles.

The first section, on the home page, is of live astrologers after which you encounter astrologers who can be reached over call or through messages. I majorly tried astrologers in the live section as it seemed like the newest way of interaction. Usually, one sees influencers on Instagram or Facebook go live and chat about multiple topics. Getting to see an astrologer go live and solve your queries about the future, was different.

On Astro Sage Varta, live astrologers answer either one or two questions. For a longer session, you’d have to probably get on a one-on-one call. But the biggest problem was the glitching of live sessions which was quite off-puting. In my case, I could only hear the astrologer's voice.

Trying to get a live astrologer on the app, is a bit like shooting in the dark—the app fails to provide any background or credentials on the astrologer. For other categories though, you could click on an astrologer’s picture to get some background and reviews to make a better choice.

As routine, the app once again asks for a number of permissions including chatting and recording audio. In the live astrologer sessions, users can type in their questions and the expert would answer them. There is also an option to follow them and receive updates on when they would be live or online after a session.

While some astrologers could offer the first session or answer your questions in a live session free of cost. Later on, if you want to get on a one-on-one call the going rates are between Rs 10 per min to over Rs 40 per minute. In a live session though, astrologers usually ask for you to give them a virtual rose or chocolate which vary in value and then they answer your questions.

Astro Sage Varta was an interesting experience, to say the least. Seeing a live astrologer probe their patrons to give them a digital gift or take the discussions over a private phone call, was a different experience. Usually, you’d be probed to buy clothes or electronic, on home shopping channels including Naaptol.

But seeing a person request users for gifts or money to tell you about your future, was a bit funny. Some astrologers also insisted that they would only answer questions if they got on a separate call.

The obsessive requests for contact details and SMS permissions did not make for a pleasant experience. But, to the app’s credit, I did come across 1-2 astrologers who seemed genuine—they would listen to the problem and provide solutions rather than just giving predictions.

From a tech perspective, the app needs work. The home page looks extremely cluttered. Instead of stacking all astrologer categories one after the other, placing them on different pages or at least leaving some gap between the current rows would have helped. A different colour combination would have also helped.

As long as people are wary, insecure or curious about their future, such apps would keep generating interest.