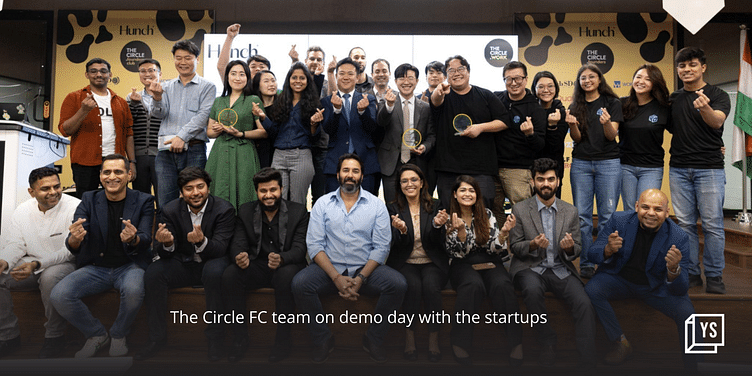 YourStory presents the daily news roundup from the Indian startup ecosystem and beyond. Here's the roundup for Wednesday, January 4, 2023.

The Circle: Founders Club (The Circle FC), a business accelerator for early-stage startups in India (a portfolio company of Hunch Ventures), in collaboration with the Korea Institute of Startup and Entrepreneurship Development (KISED) has assisted a batch of 13 South Korean startups to explore synergies in the Indian market.

The 16-week-long market discovery and entry programme offered a go-to-market engine to validate, scale and provide access to business and distribution partners for the startups to establish their base in India.

During the course of the programme, the startups signed 23 MoUs, went through 650 hours of mentoring, more than 150 one on one meetings, participated in 15 events such as NASSCOM Product Conclave (NPC), DIDAC India 2023, Expodent 2022 (Mumbai), and other ecosystem meet-ups. The offline demo-day of the programme was held at The Circle.Work in Gurugram on 10 November and saw participation from various stakeholders including some startup investors.

The Circle FC team is also working on bridge programs for Indian startups looking to expand in South Korea and other East Asian markets.

Software-as-a-Service company ﻿HighRadius﻿ has announced its new office in Kraków, Poland. This will be its fifth regional office in Europe, after London, Amsterdam, Frankfurt, and Paris.

The Poland office will focus on recruiting local finance and accounting talent to support the implementation and adoption of HighRadius solutions by the growing base of European customers.

“Our main goal is to ensure that our existing clients in Europe get the timely service and support they deserve. With this expansion to Poland, we are better equipped to provide them with the utmost level of attention and care," Sashi Narahari, Founder and CEO of HighRadius, said.

﻿Aisle﻿ has unveiled Jalebi, the newest addition to its suite of dating apps, this week.

With the tagline 'Seriously good dating', Jalebi aims to be the antidote to the shallow and often inconsequential arc of game-like casual dating.

Other than a safe and friendly community of singles, Jalebi's features include selfie-verified profiles to create a more credible community, a mosaic profile design that makes more information about a member available at a glance, and audio prompt options that allow members to level up on their dating game to establish a higher level of trust.

Jalebi is now available to download on IOS and Android.

Stride Ventures on Wednesday said that Fariha Ansari Javed has joined the team in Gurugram as Director of Investor Relations. Fariha brings over 20 years of experience in finance, insurance, and government, having previously served at CXO level across various domestic and international organisations.

In her previous leadership roles, Fariha was responsible for strategic partnerships and investor relations, playing a key role in increasing company revenue and long-term value. In addition to her professional accomplishments, Fariha serves on the Alumni Board of Harvard Business School.

In her new role at Stride Ventures, Fariha will be responsible for fundraising for the fund on the Limited Partners side and for investor relations.

Prior to moving to India in 2011, Fariha spent nearly a decade on Wall Street. From 2011 to 2016, Fariha served as Advisor for India at the Republic of Turkey Prime Ministry, where she was responsible for all FDI from India to Turkey, totalling approximately $2.5 billion. She has also served at a CXO level at Toffee Insurance, and till 2021 she was also the Founding Director at The Common Room.

Cybersecurity company ﻿WiJungle﻿ has recently announced the appointment of Vibhor Dewan, a sales veteran as South Asia Director for Government Sales. His appointment is effective from December 2022 with emphasis on deepening the penetration and making WiJungle the mainstay of the Indian cybersecurity landscape.

Vibhor has 23 years of experience in government sales. He has previously worked in National/Regional sales roles for Vodafone, Tata Communication and Airtel and was last associated with HFCL Ltd as the Senior Vice President before taking up the role of South Asia Director at WiJungle.

Vibhor was instrumental in setting up the government division of Vodafone India from scratch back in 2013. He completed his graduation from BIT Mesra in Electronics and Communication Engineering and thereafter the MBA from IILM before starting his professional career with Hughes Communications Ltd.

This strategic acquisition will augment MetaMan’s presence in the growing market of men’s online jewellery business in the country. Drip Project Co-founders Harsh Maskara will join as a Co-founder of Metaman and Rohit Golia will join as a member of Board of Advisors.

In the new year, MetaMan plans to introduce over 100 new products ranging from brooches to sneaker accessories and many more.

The recovery of the coliving sector in the post-pandemic era

After space startups, government will promote science and tech for public good