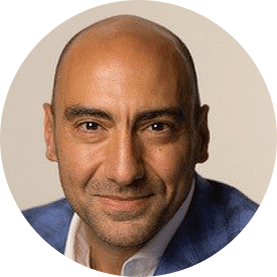 Investor, Founder and CEO with over 20 years’ industry experience in aviation, logistics, finance and tech. Upon graduating from Wharton School, Daglar founded his first business in 1997. The endeavour was involved in Nasdaq equity trading during the height of the dot-com boom and nearly gained $5bn volume per month in 2000. In 2001, the fledgling business was sold to E-Trade.

Daglar Cizmeci attained a graduate degree in Logistics Engineering from the Massachusetts Institute of Technology (MIT) in 2005.

Shortly after completing his Masters in Engineering, Daglar founded a cargo airline (ACT Airlines) and an aircraft maintenance business (myTECHNIC), based in Istanbul. Both companies were sold to a large strategic investor in 2011.

Today, Daglar remains on the boards of ACT Airlines, myTechnic and Mesmerise VR. He’s currently a CEO at Red Carpet Capital and Eastern Harmony, and Co-Founder of Marsfields, ARQ and Repeat App.

As a prolific entrepreneur, Daglar has many ventures to his name and was awarded with the Wharton School’s reputable 40 Under 40 accolade in 2015 as a means for the institution to celebrate its brightest young alumni.

Daglar is an active member of the City of London’s Guild of Entrepreneurs, is past YPO Mayfair Chapter Chair and currently YPO Europe Board Member.