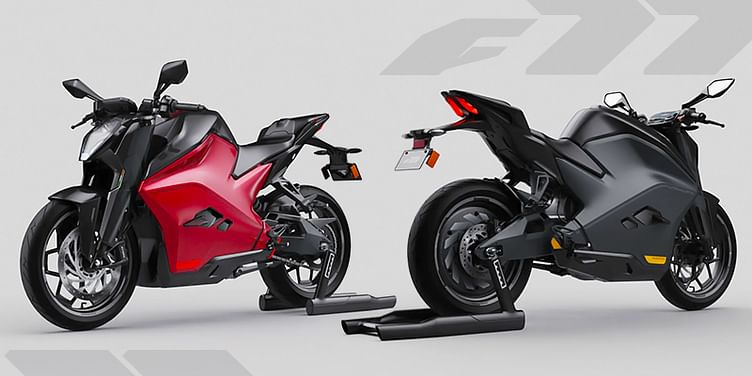 After years of development and testing that brought along numerous delays, Bengaluru-based electric vehicle (EV) startup— Ultraviolette has launched its first product named F77. The motorcycle is being touted as the country’s first proper fully electric sports bike.

Available in two variants– Original and Recon, F77 carries a price tag of Rs 3.80 lakh and Rs 4.55 lakh (both ex-showroom, Delhi), respectively. Pre-launch bookings for the battery-powered sports bike began on October 23, 2022, for a token amount of Rs. 10,000.

The company also revealed a special edition model of F77, limited to just 77 units and will be available at a price of Rs 5.50 lakh (ex-showroom). This also makes F77 the most expensive electric two-wheeler on sale in India. Each variant of the electric sports bike is offered in three distinct themes— Airstrike, Shadow and Laser.

Even in its pre-production prototype stage, F77 was a definite eye-catcher. This is still the case even in the final production-spec model. The futuristic styling takes inspiration from fighter jets that lend its sharp appearance. The angular fairing and aggressive face further amplify the bike’s sporty credentials.

Other visual highlights such as a stepped seat, clip-on handlebars and a narrow tail section give F77 a contemporary sports bike look. However, the unique hexagonal headlamp cluster comes as a separate unit as opposed to being encased within the front apron in sports bikes usually.

As far as colour choices are concerned, Original and Recon variants can be had in Supersonic Silver, Stealth Grey, or Plasma Red. On the other hand, the top-end special edition is offered in two colour schemes– Meteor Grey and Afterburner Yellow.

All three variants are equipped with battery packs of varying capacities. The base trim gets a 7.1kWh battery returning a claimed range of 207 km (IDC) while both the Recon and limited edition trim get a 10.3kWh battery that returns a claimed range of 307km (IDC). The company is offering two types of chargers– standard and boost, charging the motorcycle at a rate of 36 km per hour and 70 km per hour, respectively.

Underpinning the F77 is a platform made of a steel trellis frame and an aluminium bulkhead with the battery pack nestled within an aluminium casing acting as the stress member. The chassis is suspended on 41mm USD forks at the front and a mono-shock at the rear, both adjustable for preload.

Braking duties are carried out by a 320mm disc up front, held by a four-piston radial calliper and a 230mm rear disc mated to a single-piston calliper. Dual-channel ABS complements the braking hardware as standard. A seat height of 800mm makes it accessible for most riders. Ground clearance and wheelbase measure 160mm and 1,340mm, respectively.

Initial deliveries will commence in January 2023 and will be limited to Bengaluru. The electric bike will go on sale in Chennai, Mumbai, Pune and Kochi in Q2, followed by Hyderabad, Ahmedabad, Delhi and Lucknow in Q3 and Gurugram, Jaipur, Kolkata, Guwahati and Ludhiana in Q4.