Elections 2019: What women want from the new government 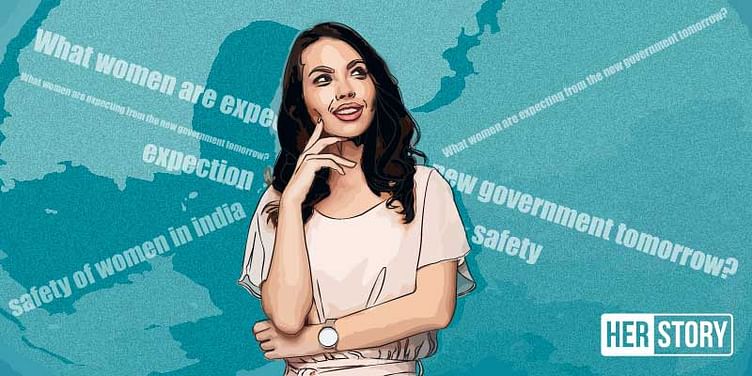 Jobs, increased participation in politics, better healthcare, and more... only some of the many things women will be looking forward to from the new government.

The countdown has begun. On Thursday, the results of one of the most closely contested elections will determine who will come to power in India.

What will the new government augur for Indian women? Will it change the status quo and bring sweeping winds of change?

According to statistics women constitute around 49 percent of the 900 million voters of India. While it may be heartening to note that at 68 percent, more Indian women turned out to vote this election, the number of women candidates contesting remains abysmally low.

Bottomline -  not a good sign for women in one of the largest democracies in the world.

However, both the major parties the Bharatiya Janata Party (BJP) and the Indian National Congress (INC), in their manifestos for 2019, have detailed their plans for women.

The BJP manifesto highlighted the success of its “Beti Bachao Beti Padhao”, and “Ujjwala” gas schemes while emphasising that it’s committed to ensure the overall development of women and achieve gender equality.

The Congress has promised a review of the POSH Act to include all workplaces. Other notable features specific to women in the manifesto, including  model legislation to establish a separate investigative agency, investigating crimes against women, expanding self-help groups, an Adhikari Maitri in every Panchayat to serve as a paralegal and educate women on their legal rights, among others.

As the new government takes centre stage in the coming days, and the focus is on the seat of power, it’s also imperative to understand what women in India want. More jobs, changes in workplace policies, increased female participation - the list is endless.

But first, they want their voices heard. Will the new government listen?

HerStory spoke to several women on their expectations from the new government and what changes they hope to see in the coming five years.

“I think the government should first focus on itself and its approach in empowering women. Time and again, we have seen the government launching various schemes and facilities but implementation has always been very poor. There has to be a significant improvement in the education sector and the encouragement of girls/women to break the barriers set by society.

“I would like to see more female speakers and trainers enter this industry and promote the importance of skill training and development to its fullest.”

“The government should definitely begin with increasing female political participation in the parliament. More focus should be given to women’s safety, health infrastructure, and improving the number of women in the workforce and education.

“The biggest issues women face are the lack of strictly implemented laws regarding women safety. Cases of dowry, harassment, assault, kidnapping, rape, and marital rape in many cases aren’t dealt with properly. Also, the government should focus on making women healthcare more accessible. For example, sanitary pads, labour homes, government-run abortion clinics, etc, should be available in all parts of the country. Another issue is the gender gap and wage gap in the workforce - government and otherwise - where, in spite of reservations, women still struggle to find their foothold in.”

“The government should focus on women’s safety. I know it could be extended to safety in general, but cases of rape or any kind of assault against women don’t get maximum sentences, which is really troubling. The perpetrators  need to fear the law.

“They should encourage more women to take up STEM. The biggest problems faced by women in the IT industry are that they are not offered senior positions because they may need a break. Sometimes, managers have even blatantly asked women employees if they plan on conceiving soon. This must change.”

“The government should give equal representation to women in electoral politics - not just 33 percent.

“The focus should be to create more jobs for women. Also, help to rehabilitate survivors of sexual abuse and bring them back into the mainstream by making them economically independent.

“The government should implement a monitoring cell to check on enforcing the Vishaka guidelines in media organisations. After #MeToo, the new trend is to avoid hiring women in media. There are strict rules on setting up a grievance cell in educational institutions and workplaces. But this is hardly met. Last but not least, there should be a pension plan for journalists.”

Empower women to speak up against injustice

“Seeing the government implement and introduce safety measures like women helpline numbers and all-female police stations, should bring a feeling of independence but despite actions being taken, there is no reduction in the crimes against women. Making improvements in the laws and policies about women safety in all segments is what we will expect from the government hoping that our basic rights are taken into consideration.

“The law and judiciary have to be sensitive to women so that they can bravely speak up against injustice.

“The government should introduce more and more schemes to offer employment opportunities to women from diverse regions of the nation.

“PR and media jobs are considered one of the toughest jobs due to the innumerable challenges employees face on a daily basis. Long working hours and late nights are a given but there is very little concern about women’s safety. This should change.”

“Freedom is not just a basic right, but also an economic imperative. However, implementing laws safeguarding women and their freedom is still a major challenge that needs the government’s attention.

“Reports suggest that only 18 percent of women have access to sanitary hygiene in India, clearly signifying the importance of health awareness related to women. Poor water and sanitation facilities in schools, offices, and public places, and the lack of awareness among girls, no sanitary pads, and lack of disposal facilities are some of the major issues affecting the menstrual health of women. The government should consider this issue and put efforts to propagate female health campaigns to create sufficient awareness among women about their menstrual health.

“Though female employment rate has risen remarkably,  employment opportunities for all sections of women are still low.  Women from rural India face discrimination that pushes them into low-paying jobs and exploitation. Assuring quality education and decent jobs should be the next key step of government towards women empowerment.”

“The government should invest in helping women and men to achieve a work-life balance. Don’t get me wrong, I don’t mean work-life balance as coming on time and leaving on time, etc. I mean it from the point of view of being able to extend the hours when possible. The government should make paternity leave mandatory because, without the early involvement of a father in the child’s development, the father will never get truly attached to the child. Once it becomes a norm for both partners to look after children, things will slowly change for the mother as going forward, both parents could take turns in childcare and associated absences required. This is how true equality will begin.

“I would like to see more women in sales in the insurance industry, mostly this is not happening as a result of the travel, long hours that are required sometimes as well as immediate safety issues for women in customer-facing roles.”

"If a majority of women start becoming self-employed, we will easily become empowered.

“The government should work towards establishing mechanisms and accelerate women’s equal participation and representation at all levels of the political process and public life in each community, society. There needs to be full and equal participation of women in decision-making processes in all spheres of life.

“The one change I would like to see in my industry, which works for the promotion of tourism in the state of Bihar, is acceptance. I would like the central government to take this seriously and work to promote the tourism of Bihar at their level.”

"As the new government comes to power, I think the government should firstly look at the increasing representation of women within key decision making positions, right from the Sarpanch level up till the Cabinet level. While government and civil society programs are providing education, health and skill enhancement to women, which is leading to a significant positive impact, we also need to focus on how women choose to use these facilities, and whether these choices are being made by her.

"In my opinion, there are three large issues that women in India face today – safety, access to education and recognition in the workforce (rural and urban).

"From a financial services point of view, we need to increase the availability of credit and other financial products to women, making those processes easier for them to access; we need to provide financial literacy and skills to women to enable them to make sound financial decisions on their own; and we need to ensure we are employing more women in the sector."

"In India the biggest issue for women is the safety and security. Though the laws are in place, the infrastructure doesn’t facilitate the aspect of security for women.

"The three parameters with which the government can address the matter of security are: invest attention and money towards strengthening the pedestrian infrastructure which forms the backbone of social infrastructure, inclusive planning and not isolated pockets of development which can only be accessed by cars and more investment and futuristic vision in strengthening and upgrading public transportation. We don’t need bullet trains; our country needs better bus/ metro systems and last mile connectivity."