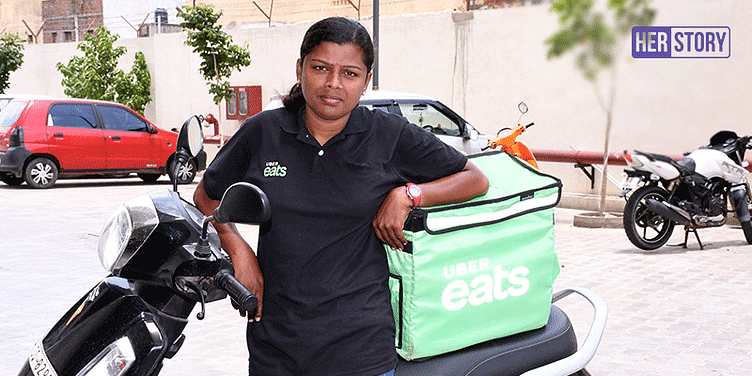 Hailing from Tamil Nadu, trans woman Preethisha joined Uber Eats as a delivery partner over a year ago. In a conversation with HerStory, Preethisha talks about her journey so far.

For many transgender people in India, finding familial and societal acceptance is not easy. Often facing discrimination, mockery and violence targeted at their identities, it is challenging for them to lead a comfortable and safe life.

For Preethisha, a trans woman from Tirunelveli, Tamil Nadu, life on the road began as a teenager. From transitioning at 14 and earning a living through badhai - an Indian tradition where trans people sing, dance, and give blessings - to acting in movies and eventually becoming the first trans woman Uber Eats delivery partner in India, Preethisha has gone through a whirlwind of experiences.

Speaking with HerStory, Preethisha shares her journey so far.

When Preethisha was just 14, she made a decision that would change her life forever. With the support of some people in Tamil Nadu’s transgender community, she travelled to Pune and underwent gender affirmation surgery, aiming to live her life as authentically as she could. Preethisha says she told her family about her decision, but they did not fully accept her for who she was.

She then moved to Delhi and stayed there for five years, initially earning a living by offering badhai at various events. Although Preethisha enjoyed singing and dancing, she says she didn’t like making people pay her against their will, and eventually quit performing with the community.

While she looked for other means of earning, often doing odd jobs and performing individually, Preethisha says her family began turning a new leaf.

“In the five years I was in Delhi, my family came around and started accepting me. They even used to visit me. Eventually, I began travelling back and forth between Tirunelveli and Delhi, and finally moved to Chennai in 2012,” she says.

While on the road, Preethisha developed a keen interest in acting, and moved to Chennai seeking professional opportunities. She also joined an acting school - Theatre Lab - where she actively pursued her dreams of being on stage and on the big screen. Through the knowledge and experience she gained, Preethisha landed roles in several Tamil movies such as Paambhu Sattai, Veeraiyan, and Vellai Yaanai. She has also acted in a few short films and documentaries.

On the way she was treated as a trans person and actor, Preethisha says,

“Everyone at the acting school was aware that I am transgender, and they did not discriminate against me for it. Outside the institute however, most people did not know about my identity, and usually didn’t question me. There are definitely some people who pass unpleasant comments, but I ignore them and move on.”

She adds that her guru at the acting institute has been a pillar of support because of his constant reaffirmations and encouragement.

Although Preethisha loved acting, she realised it wasn’t a stable career, and needed to find a steady source of income. She looked for different jobs for a while, but was only able to find options like part-time shoots.

After being rejected by another food delivery company because of her identity as a trans woman, Preethisha finally decided to apply at Uber Eats as a delivery partner. On her experience working at the company so far, Preethisha says,

“It has been one-and-a-half years since I joined Uber Eats, and the team has fully supported me. I work for 7-8 hours a day as a delivery partner, and most of my customers encourage me to keep up the good work. Although there are some grumpy customers that every delivery partner has to deal with, I haven’t faced any targeted discrimination from them.”

Finding respect after 20 years of hiding, transwoman employed as HR professional in Chennai

A few months into her job at Uber Eats, Preethisha also got married to Premkumaran, a trans man whom she had known for five years. Preethisha and Premkumaran scripted history as the first transgender couple to get married in Tamil Nadu.

Preethisha strongly believes every company should give an equal and fair chance to transgender applicants and employees.

“If large companies start supporting the trans community, we will slowly be more respected in society, and smaller businesses will start opening up to us as well,” she says.

Preethisha also points out that although there have been many transgender people scripting firsts in various fields, there needs to be more than just one or two trans people in every profession. “This,” she says, “will only happen if the government and more companies come out in support of the trans community.”

Preethisha ultimately dreams of becoming a social worker to help the trans community succeed. Through social work, she also aims to remove the stigma around being transgender.