On December 5, a large number of women attended a two-day night street carnival at Karol Bagh, Delhi, which was organised to encourage women to reclaim the night. Many of them also expressed their outrage about the rape victim from Unnao being set on fire.

A large number of women on Thursday ventured out to attend the two-day night street carnival at Karol Bagh many of whom said they felt disturbed by the news that a rape survivor from Uttar Pradesh's Unnao was set on fire while she was on her way to court.

These women had come out on the call of North Delhi Municipal Corporation (NDMC) which is co-hosting the festival for women on pedestrianised Ajmal Khan Road urging them to "fearlessly step out" and reclaim the streets with music and celebrations.

The event began at 7 pm with cultural and dance performances, and ended at 11 pm with a thematic act by local rap group Khadar ki Ladki. On Friday too, it will be held from 7-11 pm.

Women attending the event appreciated the initiative, but many were disturbed by the burning of the Unnao rape survivor, whose condition is "very serious".

The rape survivor from Unnao was battling for life with 90 per cent burns after five men, including two of the accused, allegedly set her on fire on Thursday, while she was on her way to a court. She was airlifted to Delhi and admitted at the Centre-run Safdarjung Hospital on Thursday evening.

Soumya Khandelwal, 23, an architect by training and currently preparing for civil services examination, lauded the efforts of NDMC, seeking to make the women feel safe in the city.

"This initiative may have a very small effect, but will it change the mindset of people who commit crime against women... I mean, today only the Unnao rape victim who was fighting for justice, was burnt on way to the court. I feel horrified," Khandelwal, a Bareilly native, said.

Her friend, 19-year-old Vandana Prajapati, from Gorakhpur and studying at the Delhi University, echoed similar sentiments, and sought tougher and swift punishment for rapists. Both girls from Uttar Pradesh, live in a rented flat in Karol Bagh area.

The NDMC has partnered with UN Women, Delhi Police, Raahgiri Foundation, Jagori and other civil society bodies to drive home a strong message about women safety and celebrating the streets.

Jayashree Velankar of Jagori said it was unfortunate that on one hand authorities are taking steps to make women feel safer, while on the other the incident of burning of the Unnao rape survivor makes women feel more insecure about their safety.

"The recent incidents of violence against women depict a certain mindset of some people in the society, and it is this mindset that the festival seeks to challenge. We want women to feel safe on streets, and if enough women come out, they will not feel afraid," NDMC Commissioner Varsha Joshi said.

New Delhi MP Meenakshi Lekhi, Karol Bagh Zone Deputy Commissioner Akriti Sagar were among those who participated in the event.

Special selfie zone with a cut-out of #GirlsStepOut was made for visitors at the festival, which was also attended by many men, young and old.

Earlier in the day, Union minister Hardeep Singh Puri lauded the initiative with a tweet.

Women are equal partners in the nation's progress. They have a right to step out at will & live life on their own terms.

Kudos to every organization & individual, particularly @NorthDmc, who are at the helm of this initiative. 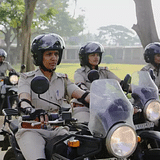